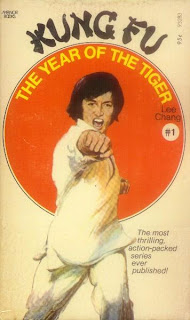 Mace #1: The Year of the Tiger, by Lee Chang

The most thrilling, action-packed series ever published!

Hey, would Manor Books lie to you? You bet they wouldn't! (And besides, if you said they would lie to you, they'd probably send some guys over to have a little chat with you...) But here's one case where the hyperbolic cover blurb really does speak truth: the "Mace" series truly could make a claim for being the most action-packed series ever published.

But then, that's all it is. Action -- fight after fight after fight. Minutely-detailed scenes of lead character Victor Mace smashing apart mob scum, beating them senseless and killing them with single blows to various body parts.

Plot...what plot? Who needs a plot?

Here's the story. Mace, raised and trained in a Hong Kong Shaolin Temple, comes to San Francisco to visit his half-brother and his uncle. The local mob wants to use his uncle's boat; the Greeks are bringing in some heroin and the mob wants a "non-Syndicate" boat for the trade, to ward off suspicion. Mace's uncle refuses to comply. The mob puts on the pressure. Mace beats the shit out of them. Again and again and again.

That's it. That's the story.

Yes, we are in the hellish, sordid, and downright bizarre world of Joseph Rosenberger -- here posing as Lee Chang (you know, so this novel seems legitimate). Rosenberger is most "famous" as the sole writer of the Death Merchant series...80+ volumes spanning two decades, each book nothing but fight after fight after fight, with lead character Richard Camellion blowing apart his enemies.

Mace is THE GOOD GUY. The mobsters are THE BAD GUYS. That's it.

Perfect in every way, trained since childhood to kill in a plethora of methods, Mace is more of an idealized he-man than anything else. On top of which he's so complacent as to come off like an arrogant ass; after a while I started to root for the mobsters, hoping they'd at least get a punch in. Or maybe a bullet or two. But no; Mace wades through this book as unstoppable as a Terminator. Nothing stops him, nothing fazes him. Therefore all dramatic impact is lost and the book becomes a tiresome slugfest, the literary equivalent of a Bruce Le movie. (Bruce Le, not Bruce Lee -- I'm referring to the lowest of the Bruceploitation clones, the guy who gave us such monstrosities as Enter the Game of Death.)

Year of the Tiger was the start of an 8-volume series. It appears in later volumes Mace becomes a CIA operative; here's hoping this opens up the stories a bit more. Because the story for Year of the Tiger is so narrow as to have tunnel-vision; you start to wonder why the mobsters don't just say "We fucking give up -- let's go get some other guy's boat for the trade!"

Later volumes branded "Mace" on the cover, but this first volume doesn't even feature his name. Instead, "Kung Fu" blazes across the cover -- capitalizing of course on the then-popular Kung-Fu TV series starring David Carradine. Manor Books never met a fad they didn't capitalize on.

Year of the Tiger is so based upon the Kung-Fu template as to be plagiaristic: Mace's name is similar to Carradine's Cane; Mace too was raised in a Shaolin Temple, only to leave it for San Francisco (same place Cane voyaged to); and just as the Kung-Fu show would feature flashbacks to Cane's training in the Temple, so too will Mace flash back to his own training...sometimes in the most odd of circumstances. (Though my favorite is when, after a massive fight with the mob, Mace flashes back to, guess what, another fight, one he fought during his childhood -- and it's just as endless as the fight scene we just endured.)

Beyond his usual bad writing, Rosenberger also specializes in poorly-researched "facts." Of them all my favorite is his explanation of the book's title. Mace speculates on the "violent" nature of the US, and decides that if there was a year for the US, it would be the "Year of the Tiger." However, Mace further speculates, "the last Year of the Tiger was in the 1800s." I guess Rosenberger didn't realize that the signs of the Chinese Zodiac revolve every several years; further, the next Year of the Tiger was 1974, the year after this novel was published!

But for all his banalities, Rosenberger pulls the most odd turns of phrase out of his head. Mobsters "so ugly Frankenstein would've pulled a double-take," narratives which take up the thoughts of the goon about to be killed: "He threw a punch. What the hell? Yeah -- why not!" Rosenberger also (unwittingly) takes the book into the metaphysical realm, often informing us how the mobsters go to hell upon dying beneath Mace's flailing limbs.

Every few pages there's another brain-wrecking Rosenbergerism, but this one's my favorite in Year of the Tiger, as Mace destroys yet another goon:

Instant death as the blood supply to the man's brain was cut off! The hood felt stupid when he woke up and found himself sitting in the middle of hell!

That line pretty much tells you all you need to know about Year of the Tiger...!
Posted by Joe Kenney at 2:00 AM

I have to say - or admit - to loving the Mace series. The constant to-ing and fro-ing from "Eastern philosophy" (or, rather, Rosenberger's version of it) to page after page of lurid violence is addictive.

He's got a great turn of phrase, too and some of the almost abstract moments, particularly during fight scenes, really helps this series to stand out.

I honestly think Rosenberger was some kind of genius.

I second the Rosenberger Genius theory. Not Genius as in "He's a literary genius" but more "crazy like some kind of reclusive whacko hermit" genius. I think he's a complete crackpot, but especially in the DM novels, Rosenberger shows a remarkable amount of research going into his works, and where he makes it up, he actually does a pretty good job of BSing the reader. Remember that this is all very pre-Internet; readers were a lot less able to fact-check a writer's ramblings than we are nowadays.

Still, I definitely think that most of Rosenberger's non-DM works aren't as good. I need to find one of the MACE books and give them a read.

Actually showing the souls of the bad guys wake up in Hell is a nice touch, although that then makes me want to know what happens to them next! Forget the main story! The guy goes to Hell. Then what happens? ☻

Hi Joe,fyi i have read every one of The Death Merchant books even though the plots were so similar the action was usually continuous. I never heard of MACE but it sounds like something i would have liked. I have read most of the mens action books and back then i really enjoyed them. For the past few years I have been trying to locate them in ebook. No luck.

I thought I was the only one into Victor Mace! Back in the day my friends and I couldn’t get enough of the books in this series. The other was so eloquent in describing fight scenes in an engaging hilarious way. Definitely a guilty pleasure