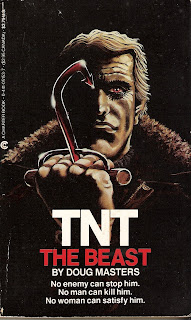 Tony Nicholas Twin returns in The Beast, the second volume of Charter Books's TNT series. Even though it was #2 here in the US, this was actually published as volume #3 in the original French series (as Le Bete Du Goulag, aka "The Gulag Beast," cover below) . But this is immaterial, because like with most men's adventure novels, each volume of TNT is pretty much self-contained.

Once again Twin is forced against his will into some harebrained impossible mission; we meet him as he awakens from a drugged stupor to find himself strapped into a SR-71 Blackbird, flying at a few hundred thousand feet over USSR-controlled Kazakhstan. It appears he's been kidnapped, drugged, and deposited into this plane by Arnold Benedict, Twin's archenemy-cum employer from TNT #1. Benedict is as twisted as ever; contacted by Chinese operatives, Benedict accepts their request to spring the leader of a mysterious terrorist cell from an impregnable prison in Kazakhstan. One so super-guarded that escape from it is so impossible as to be laughable. Benedict's price for this mission? A few Ming-era vases. (This is only our first reminder that TNT is not your normal men's adventure series; Benedict could care less about politics or global security.)

Whereas TNT #1 operated like two novels in one, with the first half the origin of Twin's heightened abilities (seeing in the dark, sexual insatiability, etc) and the second half his navigating a death-maze in South Africa, The Beast is more of a unified piece. And it also moves faster; TNT #1's first half came off like a belabored game of cat and mouse, with Benedict hounding Twin on down through America and into Mexico. It was entertaining, to be sure, but filled with ultimately pointless bits like Twin meeting a Mexican beauty who staged live snuff plays in her home. The Beast opens with Twin strapped alone into a Blackbird flying on auto-pilot over Soviet airspace and it doesn't let up until the final page. The novel takes place over the course of a hectic few days and the narrative snaps along accordingly. And whereas TNT #1 spanned the globe, The Beast takes place in Kazahkstan and Iran (where we get confirmation that the events in the novel take place before the 1985 US publication date, as the Shah is mentioned as still being in control of Iran...meaning The Beast occurs before the 1979 Iranian revolution).

Twin's mission this time is to enter a secret base in Kazakhstan which serves as a high-security prison, one run by a blind KGB colonel who wears mirrored sunglasses and can "see" people via their aura-patterns. (Due to which the soldiers in the base have nicknamed him "The Bat.") He's also inhumanly cruel and enjoys the smell of freshly-gutted corpses. Benedict's employers want a Kazakhstan rebel freed from the prison; the CIA also approaches Benedict, asking him to free a man they want escaped from the prison, this one a Soviet scientist named Vilunskhas who has created a pink metal which is paper-thin but indestructable. He's also created a super-weapon named "The Beast," but no one knows what exactly it is.

Twin parachutes from the self-destructing SR-71 and, after escaping a few regiments of Soviet soldiers who just happen to be performing night-time wargames in the dropzone, meets up with his Kazakhstan contacts. One's an attractive Kazakhstanian who calls herself "Arkady" and who claims to be Twin's "Trump Card." The other's a massive Russkie named Valka who can deadlift nearly 700 pounds and who wears green curlers in his red beard. But as in TNT #1, Twin doesn't appreciate being forced to do things against his will and escapes; a well-done chase scene follows, one in which Twin ensconces himself in a tanker full of caviar, but, as in TNT #1, it's all rendered unecessary.

Finally Twin is sent into the Kazakhstan base/prison. Like TNT #1, this is really just a death-maze, one Twin must navigate to achieve his goal. If however The Beast is inferior in any way to its predecessor, it would be here -- for the death trap in this novel is nowhere as bizarre or horrifying as the one in TNT #1. But then again, how COULD it be?

TNT #1 had a death-maze called "The Seven Circles of Hell;" here Twin has to travel through a few thousand feet of underwater pipeline into the inner heart of the prison, where after a few detours he finds himself in a football field-sized space from which dangle the corpses of prisoners. It's here that Twin has his one sexual interlude of the tale (not with one of the corpses!); the sex scene is more detailed than those that occured in TNT #1. But still The Beast retains the almost clinical narrative of TNT #1; gore is minimal despite the occasional gunfire, and when people are killed it's dealt with in an almost perfunctory level. And here again Twin himself never handles a weapon; instead the few times he kills he does so with his hands, smashing men's heads into walls or "severing" their spinal columns with a karate chop.

Buried within the prison is "The Beast" itself: a massive, rolling construction of that indestructable pink metal, weighing several tons, floating on an air cushion, and powered by a nuclear engine. Twin and his comrades escape on it, rolling through several thousand miles of Soviet terrain, destroying everything in their wake and surviving all manner of attacks. For the metal truly is indestructable. After a while this wears a little thin -- drama is about struggle, and it's no fun when the hero can just roll away untouched from the mouth of hell. But Doug Masters is a better writer than that; the Soviets finally unleash their ultimate weapon on The Beast, and its occupants suffer the consequences in a horrible way. This is another facet of Masters's genius; when his characters do suffer or die, it always leaves a bitter taste of remorse in the reader's mouth. Strong characters make strong impressions.

Because beyond the good writing, surreal plots, and outrageous developments, one thing that sets "Doug Masters" apart from the men's adventure lot is his characters. To a one, each is memorable. Only Twin himself comes off as boring, but I'm certain this is just another of Masters's tricks. For unlike other men's adventure leads like Mack Bolan or The Butcher, men who are driven to madness to perform their duties, Twin takes part in his missions against his will, and indeed goes about things with an almost blase lack of care. At one point he even appears to fall asleep while Arkady's relating how dangerous the prison is he's about to be sent into. A recurring joke is that everyone assumes he's American, no matter how many times he insists he's Irish.

But the supporting characters shine. Valka is especially memorable: bigger than life in more ways than one, getting all the best one-liners despite his broken English. Arkady (aka Marina -- not to go into detail but there's a "surprise" over the Trump Card's real name, one which I felt was uneccessary) is quiet, determined, and despite her youth and inexperience has caused a few nations to nearly come to war. Vilunskhas the scientist has an ego which more than makes up for his small stature, barrelling through the prison once Twin's arrived and bossing everyone around as he gets his vengeance on his captors. There's Dawlish, a Royal Navy operative who works for Benedict, a sterling Brit who cultivates his moustache and reads Rudyard Kipling in between killing countless Iranian and Russian soldiers (though it's taken him a few decades to make it through 90 pages). Benedict himself doesn't appear nearly as much as he did in TNT #1, but when he does appear he's always entertaining. And Twin's mentally-retarded daughter October barely appears at all, only mentioned in passing and then showing up for the happy (for now) ending on Twin's estate in Ireland.

And yet no matter how outrageous the characters are, Masters always finds a way to reign them in on a human level: Valka, despite his bravado, lives in shame that he was banned from the Olympics due to thievery. Marina matter-of-factly relates one of the most horrifying torture sequences I've ever read, one which she endured at the hands of The Bat, and it is her one desire to experience pleasure at least once in her life before dying. All of the characters spring to life, even those who appear for a handful of sentences.

It's hard to convey in words how much I love this series.

As promised, here is the original French cover of this novel -- again, it was published third in the series in France, with the title Le Bete Du Goulag (aka The Gulag Beast): 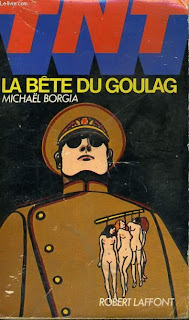