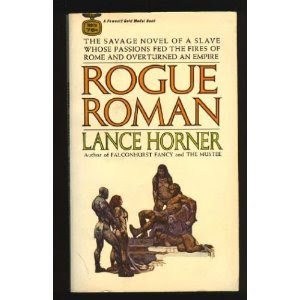 Rogue Roman, by Lance Horner
Fawcett Books, 1965
Published in 1965 and in print for several years thereafter, Lance Horner's Rogue Roman is now long out of circulation and mostly forgotten. It is worth seeking out - a sterling example of the exploitative historical fiction churned out for the popular market in the sixties and seventies. Books that tread the line between pulp fiction and genuine literature, filled with sex and carnage, but which also took the time to plumb the depths of their characters' psychology.
The novel spans the years 55 - 62 CE, during the reign of Nero. Cleon is our hero, a blonde-haired youth who has grown up in Syria, surrounded by a ragamuffin family of mixed races; seems his actual parentage is questionable, and he certainly does not consider his Syrian father to be his true parent. (Later it turns out Cleon is right.) Cleon escapes his miserly roots to become a mime for a travelling group of artists from Antioch; here he is introduced to the slave Mannax, a gay youth who once served men as a temple slave in the Grove of Daphne in Antioch. Cleon grows accustomed to his more exciting life, entertaining audiences in Antioch, when disaster strikes and he and Mannax become slaves. The pair are trained as gladiators, both growing more solid and well-built during their years of training. Eventually Cleon, Mannax, and the rest of their new friends in the gladiator school are taken to Rome, where Cleon's spotted by the Chief Vestal Julia Livilla, who happens to be the sister of Agrippina the Younger - the mother of Nero.
Cleon turns out to be a dead ringer for a man both Julia and Agrippina loved, long ago; in fact, they are certain he is the man's son. This seems true to Cleon; his mother often mentioned to him that his true father was a Roman dignitary. But there's more to it: Agrippina reveals that this same blonde-haired Roman dignitary was the true father of Nero. This means that Cleon and Nero are half-brothers. And the two look so similar that Cleon could easily pass for Nero, using his mime skills to complete the picture.
Nero has gone mad with power, and Agrippina and Julia conspire to oust him. Their plan: Cleon will step in and "become" Nero, and no one will be the wiser. This intrigue guides the final half of the novel, with many double-crosses and reversals and surprises - the most significant being for Cleon that he falls in love with Nero's ignored and virginal wife Octavia.
So that's the plot. Horner complements it by bringing the ancient world into full Technicolor life. There are set pieces aplenty here, especially a fantastic scene set in the Grove of Daphne where Cleon attempts to satiate his rampaging desires. The prerequisite gladiator material isn't as prevalent as one would inspect; indeed, Cleon is mostly kept from harm due to Julia's protection. Cleon is, at least: there is a long setpiece in the arena in which Horner piles on the graphic descriptions of death, rape, and torture which took place before the eager eyes of onlookers, all of it straight out of Daniel Mannix's Those About To Die. Horner also plays up the opulent decadence of the Roman court, with appearances from Nero, Petronius (author of the Satyricon, which goes unmentioned), and Nero's mistress Poppaea Sabina. There's a great discussion between Nero and Petronius on if it would be wise for an emperor to kiss his wife in public.
Again, this is an enjoyable novel, but it does have a pulp fiction undercurrent. The first half of the novel comes off like a series of short stories connected arbitrarily; Horner spends time developing characters and plots (the young actress Cleon falls in love with while he's a mime, the older pair who have hired him on and who own Mannax), only to cast them aside without warning. The dialog also comes off a bit too "Hollywood historical film," with characters talking like they've just stepped out of a Shakespeare play. There's also a puzzling homoerotic tenor; Mannax falls in love with Cleon, and often insists that he prefers boys, yet once he becomes a gladiator Mannax is forced to sleep with a woman. Calling Dr. Freud! There's also a very disturbing scene involving a group of guys sitting in a circle, a clump of dirt before them, and, well, their "anointing" of it for the goddess Fortune. A scene I'd prefer to forget.
Horner wrote several novels with Kyle Onstott, but here he works solo; Onstott provides an introduction to Rogue Roman, where he says he hopes the book will one day become a movie. Unfortunately that never happened. Onstott and Horner returned to the ancient world on their own, however; in 1966 they collaborated on Child of the Sun, about the "depraved" 3rd Century CE emperor Elagabalus.
Rogue Roman had the same cover throughout all its printings: a superb Frank Frazetta painting of a muscled blonde man reclining in opulence as a Nubian slave presents to him a busty and nude redhead. Ah yes, that old Frazetta misogyny in full effect; there are even two more semi-nude slave girls who sit obediently at the blonde man's feet. It doesn't have much to do with the novel, but it's effective.
Posted by Joe Kenney at 10:26 AM

I love the book and cover. I have it in my collection & have reread it a few times.