The Last Nights of Pompeii, by Martin Saul 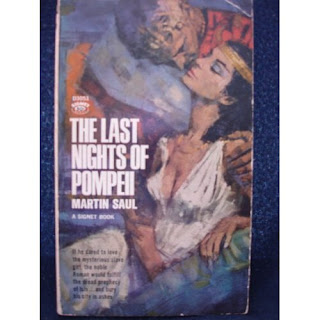 The Last Nights of Pompeii, by Martin Saul
Signet Books, 1966

Published in 1966 as a Signet mass market paperback and never reprinted, Martin Saul's Last Nights of Pompeii is more novella than novel - it's a mere 125 pages of tiny type with a poorly-constructed plot and barely-developed characters. It jumps from one illogical extreme to another, and, all told, not much happens. So what's to recommend? Simply put, it's a great example of the historical trash fiction genre of the sixties and seventies, a genre which gave us such gems as Jack Oleck's Messalina and Lance Horner's Rogue Roman.

It's 79 CE and Marcius Longinus is a tribune in Pompeii. Vesuvius, of course, is about to erupt, but Marcius and his fellow townsfolk are blissfully unaware. Marcius fought in Jerusalem with Emperor Vespasian's son Titus - Titus, who himself is soon to become Emperor, as Vespasian is near death. While in Jerusalem Marcius and Titus rescued a young girl from the carnage outside the great Temple; Marcius went on to raise her, thinking of her as a younger sister. This is Selene, and she is neither Jewish nor Roman - indeed, no one is certain who or what she is, as when rescued she had no memory of where she was from or even who her parents were. Selene is now a beautiful young woman, one of Marcius's many slaves, though he's sure to point out she's only a slave by way of warfare. And Selene has become fixated on Marcius, in love with him; Marcius gradually realizes he too is in love with her. Yet problems loom: turns out Titus's Jewish lover Berenice has prophesized that Selene, if she fulfills her love with Marcius, will cause much devastation. (Read: If Marcius and Selene get it on, Vesuvius will erupt.) Intrigue ensues as Berenice attempts to foil Marcius and Selene's blossoming love.

The above could easily fill a much longer book, but as mentioned Last Nights of Pompeii is only 125 pages long. The novel comes off more like a synopsis, Saul rushing through his story. Beyond that, he has difficulty lending credibility to the Marcius/Selene romance; Selene doesn't even appear until 60 pages in, and we're supposed to believe that she's suddenly fallen in love with this older man who took her captive after butchering countless Jews. (Even more disturbing: the whole "I raised her but now I love her like a woman" deal reminds me of the whole Woody Allen/Soon Yi situation.) So this isn't a love story written by the stars, and Saul doesn't help himself by rushing through it: in just a few chapters Marcius has convinced himself that he does in fact love Selene and plans to marry her.

In addition to the main plot you have the usual requirements for fiction set in Rome: a graphically-detailed arena scene complete with battling gladiators and helpless victims being mauled by lions, chariot races, priests of forgotten religions muttering mumbo-jumbo as they wave their wands, walk-ons from historical personages (Titus, Berenice, even Jewish historian Josephus), and, of course, a mention or two of "the Nazarenes." Thankfully these Christians aren't the main focus of the novel; they only appear in a few places, yet Saul gives them loathsome dialog, baiting Marcius and his fellow "sinners" and promising that Pompeii will soon suffer for its "sinfulness." Makes me want to go back in time and HELP the Romans shove them into a lion-packed arena. But luckily neither Marcius nor any of the other characters are swayed by their preaching, which makes me wonder if perhaps Saul is taking a swing at the Christians. (Though I couldn't help but notice more than a little anti-Semitism in the vitriol Titus spews about his former adversaries in the Jewish war.)

The novel is very much of its time: the women are either virginal innocents (like Selene) or manipulative schemers (like Berenice). There's a huge dose of misogyny in a too-long subplot in which Marcius's pal Claudius gains a new slave: a beautiful patrician woman who's been cast into slavery for having an affair with her husband's slave. Claudius gains control of her and, despite his lust for her beauty, proceeds to treat her like garbage, threatening her with whippings, assigning her humiliating chores, and refusing to so much as even look at her. And guess what? She eventually falls in love with him. Take THAT, Women's Lib!

And yes, Vesuvius's eruption is the climax of the book. We all knew it was heading there, anyway. Saul rushes through the disaster, getting some details wrong - he has the city covered in lava moments after the eruption, but archeologists now know that the townspeople had a long time to escape the city between the first blast and the eventual destruction. In fact, it now seems that the majority of the citizens safely escaped; those who did die in the catastrophe only did so because they stayed behind, thinking it was safe. (Saul makes another mistake when he has Marcius mention stirrups, something which wasn't invented for another 500 years.)

So, at times poorly written, with a plot based on a ridiculous prophecy, and with characters who are a bit too wooden, The Last Nights of Pompeii isn't a great novel, but it's at least some good and trashy fun.
Posted by Joe Kenney at 10:58 AM