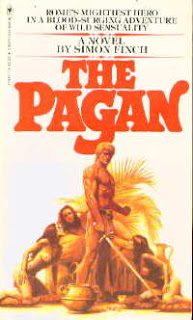 Published in the UK in 1979 as Pagan Voyager and in the US as The Pagan (as seen to the left), this is book two of Simon Finch's Vesuvio trilogy, the epic struggles and sexual adventures of one man in the Roman Empire of the early second century CE. We pick up with Vesuvio six years after the first novel, 1978's Golden Voyager (and again we're informed that the year is "110 AD by the Christian calculation" - whereas this form of dating wasn't invented for a few more centuries). Vesuvio's now an established and wealthy member of Roman society, the owner of the land in Campania which was stolen from his family in the previous novel. Vesuvio also owns many slaves (despite his thought at the end of Golden Voyager that he would never own any), giving them easy means of freedom, and treating everyone with respect and kindness. Not yet thirty years old, Vesuvio is still unmarried, though he plans to free the beautiful slave Miranda, with whom he's recently fathered a baby boy. The novel opens with Vesuvio in Rome, arranging to free her - so he can legally marry her.

Of course, this being Vesuvio, things go to Hades quick. Miranda is taken captive by slave traders (much as Vesuvio himself was in Golden Voyager) and our hero plunges into a quest to get her back. Only problem is, Vesuvio proves to be one underwhelming hero (or maybe it's just that Finch is an underwhelming author). Because, well, he doesn't get very far in his quest. Instead, Vesuvio is quickly captured and then sold into slavery, and this novel, just like Golden Voyager, details his plight in servitude. And just as Finch focused on episodic tales of Vesuvio in slavery in Golden Voyager rather than on Vesuvio's betrayal and eventual vengeance, here too he denies readers the epic quest of revenge and reunion which is promised in the opening pages.

One of the major frustrations in Golden Voyager was its lack of a strong villain. Even though Vesuvio was sold into slavery and his family killed, his eventual revenge was given short shrift by Finch, with the humdrum villain appearing for a scant few pages. Pagan Voyager is no different. We meet the villains in the early chapters, and a loathsome pair they are; the reader truly wants to see them get their comeuppance. But Finch drops the ball and mostly forgets about them, instead getting sidetracked with the background stories of the various slaves Vesuvio meets. In other ways too Pagan Voyager is a rewrite of its predecessor; just like that novel, this one features a major and deadly chariot race in which Vesuvio proves his mettle against all competitors.

But the thing is, whereas Golden Voyager was at least fun in its addle-headed way, Pagan Voyager just comes off as dire and pointless. We've already seen Vesuvio cast about the ancient world in various modes of slavery; why do we need to see it again? And here, just like in Golden Voyager, the villains - the ones who ordered Miranda to be kidnapped and who cast Vesuvio into slavery - are dealt with in a perfunctory manner. Indeed, as the climax approaches, with the villains on their way to Vesuvio's present location, Finch instead obliviously wastes time with pages and pages of Vesuvio being groomed and dressed for a party, where he is to serve as a pleasure slave. Imagine if in the film Ransom Mel Gibson's character spent the last ten minutes trying on a few different pairs of clothes and you'll get the idea. Worse yet is that Vesuvio doesn't even play a part in the villains' eventual comeuppance, thereby rendering the whole thing moot.

What's really unfortunate is that Vesuvio goes through his ordeals without question. This was understandable in Golden Voyager. There he was just a kid, snatched from a wealthy family and thrust into the world of slavery. But he suffered through a three-year ordeal in that novel, emerging as a triumphant Roman citizen. So it's really strange that Vesuvio so readily accepts his return to slavery in this novel. He goes from one owner to the next, taking to his chores and scoping out the lay of the land. This man is a high-born Roman with his own villa in southern Italy, whose wife-to-be has been kidnapped! It's all very frustrating, and there's no way such a thing could be depicted onscreen; audiences would be throwing refuse at the ineffectual "hero" of the film.

In my review of Golden Voyager I mentioned - a bit too thoroughly - the homoerotic subtext so apparent in Finch's prose. Pages and pages about Vesuvio's good looks, his superb physique, his large "phallus." Here Finch goes even further. In Golden Voyager Vesuvio made it through the book without engaging in "unnatural sex," ie sex with another man - even though this seemingly was Vesuvio's greatest fear/obsession. But he does not fare so well in Pagan Voyager. Because, not even a few days out into his quest, Vesuvio is captured by pirates who proceed to use and abuse him. I've never seen a main character so debased in a novel. Vesuvio is used as a sexual toy by the decrepit men on the boat, so brutally and thoroughly that he's eventually cast aside as useless. Finch of course goes into hyper-description mode, recounting what the pirates do to Vesuvio.

But here's the thing: Vesuvio never once fights back. He just gives in to his fate, and accepts the men's abuse. It's all very, very disturbing. And when one takes into consideration the amount of detail Finch gives the male characters as compared to the women (he'll spend pages on the various males Vesuvio encounters, each with "rippling muscles" and "deep chests," etc, whereas the women characters are only minimally described), you know for sure something's up. But like in Golden Voyager, despite Vesuvio's constant fear of being taken advantage of by another man (reading Finch, one gets the impression that men had only two worries in the ancient world: 1.) being sold as a slave, and 2.) being sold as a slave and then sodomized), despite the minutiae of detail Finch gives the "burly" and "handsome" men Vesuvio meets, Finch still wants to tell us that gay sex is "unnatural." There's even a lesbian in this book, with another female character unsuccessfully struggling to think of her in "that way" in order to use her for her own ends. So one can easily see Finch was having some issues which he tried to work out in the narrative. Finch's last novel appears to have been 1985's Slave Island, something about 17th Century pirates, but I imagine he eventually began writing gay fiction under a pseudonym. Because let me tell you, folks, he was already pretty much there in Pagan Voyager.

Otherwise Finch is up to his usual tricks: the book is moreso softcore porn than historical fiction. Finch follows the same method throughout: he'll set up a scene with some details gleaned from his knowledge of the ancient world, and then proceed into several pages of minutely-detailed sex scenes. But not a single one of these scenes is arousing. I read stuff in Penthouse Letters as a kid (one of the benefits of having an older brother) that was more scintillating. Also, the s&m elements in Golden Voyager are even stronger in this sequel. For example, within the first three pages Finch gives us a harrowing scene of a brutal whipping, providing the details of each wicked snap of the whip, complete with characters soiling themselves in agony. Characters who, by the way, have absolutely zilch to do with the rest of the novel; indeed, the scene itself has nothing to do with the rest of the novel. But this is just one of the many sadomasochistic pleasures Finch indulges in throughout; Colleen McCullough this ain't.

I'm not sure about the UK edition, but the US version of the novel, The Pagan, is filled with bizarre grammatical errors and misspellings. I'll go ahead and give Finch the benefit of doubt and assume the publisher was at fault. But beyond that, the book really is poorly written, filled with gross coincidences (everyone Vesuvio meets either knows Miranda or the people he's searching for), muddled plotlines, and go-nowhere digressions. Worse yet is that in this novel Finch tries to impress us with his modicum knowledge of Latin, peppering the narrative with occasional words and phrases. Only problem is - and this is a problem I have with much historical fiction - these characters are already speaking Latin. So why must Finch (and other historical fiction authors) give us a few words in that language? The book's already historically-inaccurate in that characters are speaking English; a few "actual" words here and there won't change things.

Pagan Voyager came out one exact year after Golden Voyager, but it wasn't until 1981 that Finch published the final volume of the trilogy, Voyager In Bondage. That one wasn't even published in the US, but thanks to the fantabulous Internet I've gained my copy from an overseas seller, and am now duty-bound to read it. Jupiter give me strength.

I can't believe somene else has read this "amazing" book.

Your blog is awesome. How do you know about all this stuff? Have you read everything you make reference to?

Honestly, you have made my week.

Thanks Joe. I have read Golden Voyager, and you're right about the comparative problems with Pagan Voyager's narrative as a result.

I will definitely be checking out The Barbarian Princess.

If you read it, please let me know what you think. I plan to re-read it one of these days. A close runner-up would be "The Emperor's Virgin," by Sylvia Fraser. That one completely captures the technicolor decadence of Imperial Rome. It's only let down by a middling courtroom finale that goes on forever.

As for Vesuvio, do you intend to read the finale (or have you read it already), Voyager in Bondage? I wouldn't recommend it...my Voyager reviews were originally listed on Amazon.com and a guy emailed me about them a few years ago. He had read the first two books and was determined to find the last book. After reading it he could only agree with me -- but luckily he was able to find it for a nice price.