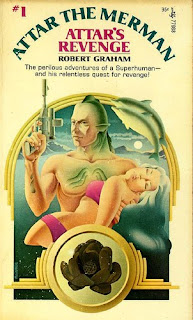 Attar #1: Attar's Revenge, by Robert Graham
January, 1975 Pocket Books
One of those random used bookstore discoveries; scanning the aisles of the sci-fi section, Attar's Revenge jumped out at me. The cover too was interesting; it reminds me of the old Dell mass market paperback covers for Wilson and Shea's Illuminatus! trilogy. There are other similarities as well -- intelligent dolphins who communicate with humans, conspiracies, government operatives -- but other than that this novel is far removed from the fuzzy-funky league of Wilson and Shea's masterwork.
This was the first of a series, however it only lasted two volumes. Pocket Books clearly were trying something different: melding sci-fi pulp with men's adventure fiction, while at the same time overlaying it all with an eco-awareness. But it just doesn't work. For as our hero, Attar the merman, blasts his way through hordes of Japanese henchmen in order to save some dolphins, one can't help but put aside the book and wonder at the hypocrisy of his actions. Add to that another problem: namely, that Attar is a complete prick. But more on that later.
The novel is actually well-written considering its many problems. No surprise, because Robert Graham is a psuedonym of best-selling sci-fi author Joe Haldeman. It appears this was one of his first publications, coming out a few years before his groundbreaking Forever War. So even though this novel is part of the men's adventure world, it's blessed with better writing than the norm; POV-jumping is kept to a minimum, characters are developed rather well, dialog is good.
Attar is a half-caucasian, half-Japanese guy raised by a consortium which is dedicated to preserving the ocean and its creatures. Raised with a host of other orphans, Attar is trained in science and all the usual subjects; he's also taught to swim from very early youth, so that he's nearly one with the sea. This being a men's adventure novel, he's also trained in warfare and commando tactics, including arming explosives. Finally, upon reaching adulthood he undergoes surgery which endows him with gills, allowing him to basically breathe underwater. Hence "Attar the Merman." Shortly after this he discovers he can communicate with dolphins, who speak to him in his thoughts -- again, just like in Illuminatus. (These dolphins turn out to be the most memorable characters in the book.)
That's the groundwork. The plot of this fast-moving 180-pager is Attar's vengeance upon the Black Lotus gang, the Japanese mafia in all but name. Run by an American-raised Japanese man who is still bitter over how he was treated during WWII, the Black Lotus is currently raiding the seas for dolphin-meat, a delicacy in Japan. Attar's enraged and begins commando raids on their ships. Eventually it turns out that Black Lotus is into worse things: heroin, smuggling, the like. Attar takes up a mission from the CIA and goes with his "sister" to blow up yet more Black Lotus ships. Now, Attar's "sister" is also his lover -- something the back cover skirts around. For like Attar she is an orphan raised by the eco-consortium; they are not related in any way. His woman killed during this mission, Attar goes about obtaining the "Revenge" of the title.
The thing is, from here on out Attar becomes a very unsympathetic character. Of course I realize the reason for this -- he's suffered great loss, he can think of only vengeance. But he comes off like a total prick: arrogant, callous, pompous. He pursues the Black Lotus with grim-eyed resolve, but it just feels wrong -- he kills men left and right, all in order to protect the sea, and it just comes off as incredibly hypocritcal.
I'm assuming this clumsy welding of disparate genres is what spelled the early fate of the Attar series. For nowhere are we lead to believe that it was only scheduled to last for two volumes; volume 1 comes off like the introduction to "a great new series." My guess is that it sold in such low numbers that Pocket Books cancelled it -- or, rather, that Haldeman realized himself that it wasn't working and went on to greater things.
Attar returned in the second and final volume of the series, War of Nerves.
Posted by Joe Kenney at 9:35 AM

It sounds like they were trying to recreate Namor, the merman superhero of Marvel Comics. He too was arrogant and ruthless, which were unusual qualities for the good guy.