By now my obsession with the men's adventure series TNT should be quite obvious. So let's pursue that obsession even further...

One thing that's always struck me as strange is how few movies were ever made from the once-ubiquitous "men's adventure" novels which were all the rage in the '70s through the '80s. I mean, there was never a Mack Bolan movie, never a Death Merchant movie. Sure, in '85 we got Remo Williams: The Adventure Begins, a lame film adaptation of the Destroyer series...and in '77 we had Black Samurai, starring Jim "Enter the Dragon" Kelley, but why weren't more of these books snatched up by quickie film producers? I can't imagine the rights would've cost all that much.

As I detailed in my review of TNT #1, the series was originally published in France before coming out in English translations here in the US, starting in 1985. So let's say someone decided to make a movie of these things...let's say production started around 1986, right at the pinnacle of the '80s action phenomenon. I'd imagine it would be the Canon Group, or some other direct-to-video production company; it would be easy to imagine some big-budget realization of the series but let's keep this fantasy based at least a little in reality.

So, who would play Tony Nicholas Twin -- aka the "TNT" of the series?

Twin is described in the novels as tall and very thin, with long hands and a feline grace. Apparently he's handsome enough to be popular with the ladies, but when he's pissed his features can instill terror in his enemies. But all told Twin is established as a mostly nondescript guy -- which, really, is the point character, as this air of unimportance masks his super-powers.

The anonymous cover artist at Charter Books said to hell with this description and gave us, basically, a faux Arnold Schwarzenegger. I mean, nondescript leading characters don't sell men's adventure novels, do they? TNT #1 was published in January, 1985. Who was at the top of the action-movie field in 1985? Arnold was, that's who. Charter Books knew what to do.

The cover of TNT #1 seems, to me at least, totally indebted to the famous promo shot of Arnold from the first Terminator. Just compare: 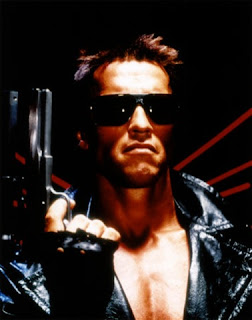 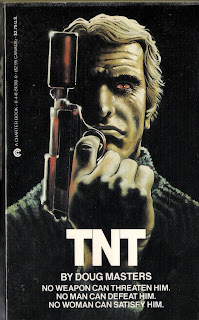 Seems pretty similar to me...but then again what do I know about crass marketing moves?

Like I said, if the TNT series had been adapted into film, I think it would've been more of a low-budget sorta thing, so Schwarzenegger's out. As low-budget as they look today, Arnold's films at the time were major features. Who then could play our title character?

Since I first saw these TNT covers in the mid-'80s, one other actor has come to mind besides Schwarzenegger -- Brian Thompson. One of those supporting-actors you might know when you see, even if you don't recognize the name; you might remember him best as the pantyhose-masked, axe-wielding cult leader "The Night Slasher" in Stallone's ultra-violent, men's-adventure-novel-esque Cobra.

Take a look and see for yourself, comparing a headshot of Thompson with the cover of TNT #6: Ritual of Blood: 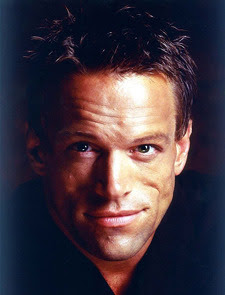 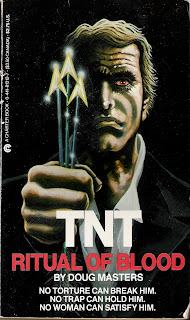 I first became aware of the TNT series as they were being published in '85/'86, and when I saw Cobra (in the theater with my mom -- who walked out of the showing because Thompson and his fellow cultists scared the shit out of her, believe it or not), even then I thought this guy resembled the character depicted on the TNT covers. (Of course at the time I hadn't even read the series, but I was aware of it.)

And besides, given our '86 production date, Arnold was busy with Raw Deal, right?

Of course, Twin would have to be an American in the film version...can't have an Irish lead character in an '80s action film, can we? And despite the character's aversion to weapons he'd have guns blazing at all times.

So who'd direct? I'd recommend either James Glickenhaus (who gave us the very men's adventure-esque The Exterminator) or George Cosmatos, director of Cobra. Both of these guys knew how to deliver lurid, fast-moving tales with gunfire and blood squibs to spare. And the soundtrack would be the usual Radio Shack-sounding synthesizers heard in every mid-'80s action film.

I was going to post on your review of TNT #2 that SOMEONE needs to do a movie of one of these. Your title of the above piece made me think that it'd already been done.

Ah well. It was a nice dream, anyway.

And this damn site's gonna cost me some serious coin, I just want ya ta know!

Brian Thompson: Yeh! Still acting, one my favorite roles by him is the bug eating Renfield in Fright Night 2. He was also good as the menacing alien killer in X-Files. I always thought he would have been great in a Predator sequel playing Schwarzenegger's "brother".--Mark Baumgart