In 1980 Writer-Director James Glickenhaus delivered The Exterminator, a lurid piece of exploitation riding on the dying coat-tails of the grindhouse world; four years later this follow-up was released to maybe 13 theaters nationwide, however Glickenhaus had moved on. The sequel was directed by Mark Buntzman, who had produced the original film. But whereas Glickenhaus had made more of a horror/gore film with the slight trappings of an action movie, Buntzman instead delivered a full-on, OTT '80s action movie, which was the style of the time.

Actually, word has it that the true story is a bit more than that. Apparently Buntzman did create a lurid movie along the lines of The Exterminator, however since the sequel was being released by those fine purveyors of Stupid Action Movies, The Canon Group, the workprint Buntzman turned in was deemed unreleasable by Canon standards and so a wealth of new material was shot, all of it action scenes.

Leading man Robert Ginty returns as John "Exterminator" Eastland. As the movie poster claims: "In the Exterminator he made the streets of New York safe. All has been quiet -- until now!" Leaving aside the absurd second sentence -- when have the streets of New York ever been "quiet?" -- Eastman is a middling lead character at best. A 'Nam vet who got vengeance in the first film, here he's a cipher who stumbles about NYC with vacant eyes.

Or maybe that's just Ginty himself, never the most vibrant (or memorable) of actors: 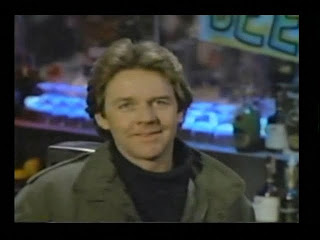 Four years out from the horrific events of the first film he's kind of just wandering through life. Meanwhile, the streets of NYC are on fire, a gang of goofy street punks waging war against the unprotected masses. They're led by a man named "X," a self-styled messiah of the streets: 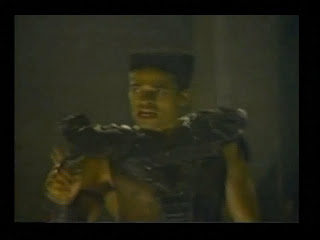 Yes, that's Mario Van Peebles.
What more needs be said about a movie when you realize that Mario Van Peebles is the best actor in it??
X's laughable army of "street punks," all of whom look like they just walked out of a cheap Italian knock-off of Escape from New York, are cutting a swathe of destruction through New York. Robbing licquor stores -- where they even kill the elderly owners! -- kidnapping young women, setting up deals with the Mob to bring in a new drug with which they plan to control Harlem...and then the city!
Enter the Exterminator, who fries a whole bunch of 'em: 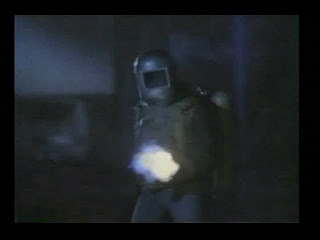 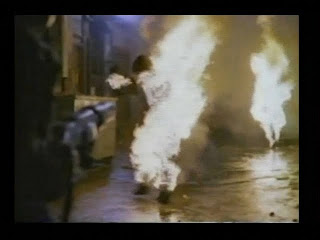 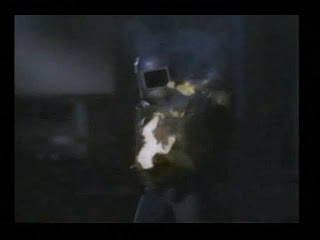 In between punk-incenerating, Eastman romances a young lady who dances in a bar. This "romantic subplot" is ludicrous at best, as Eastman/Ginty exudes ZERO chemistry; it would be more believable if the young lady was a hooker, someone merely spending time with him in exchange for cash. The entire feel of this subplot is unrelated to the rest of the film. But I guess we're to believe that the baby-faced Eastman is really just a nice guy...that is, when he isn't wearing a welder's mask and torturing/burning street punks half his age.
Here I must mention the INCREDIBLY CHEAP SETS this movie is graced with, particularly the bar in which Eastman's girl dances: 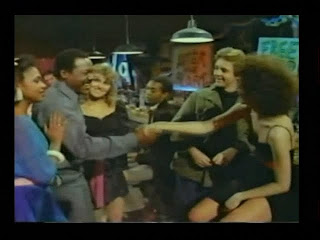 Now check out this DOCTOR'S OFFICE: 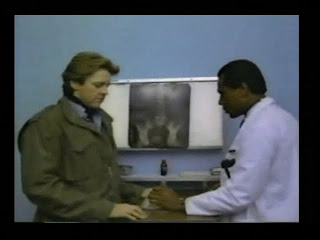 And the bar again -- complete with a stage that looks like it was just used for some kindergarten show 'n' tell: 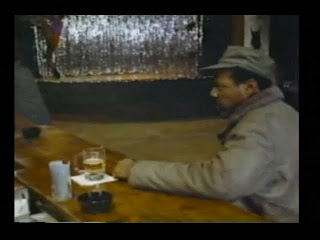 So as you can see, the budget was a bit limited for Exterminator 2. Even the soundtrack is laughable; to say that it sounds like a video game would be a complement. It's even more inept than that.
The direction too is plodding -- but then, that might not be all Buntzman's doing. From what I've read, Exterminator 2 was envisioned and produced as another sick little bit of exploitation, but, again, the Canon Group deemed otherwise. New footage was filmed, particularly for the end. What's crazy is the end is the best part of the movie -- Eastman turns his garbage truck into a city tank, dons his welder's mask, and wages a one-man war on X and his army.
Only, that's not Ginty behind the mask. Apparently, all of the stuff you see in Exterminator 2 with a masked Eastman is footage filmed after the main production wrapped; all of it is footage inserted at the behest of Canon to increase the action quotient.
Even without knowing this, the dichotomy is apparent. The fact that you don't see Ginty's face for the last 20 minutes or so is a pretty big giveaway; it's as if he's suddenly become Batman and must don his trusty mask before he can combat the foe. It just seems goofy, especially given the lurid nature of the first film.
That being said, the action, escpecialy in the finale, isn't bad. Lots of explosions, flame thrower action, and submachine guns blasting on full auto. It culminates of course with Eastman and X battling mano e mano, but this itself is goofy -- though what other movie could you name that features flame thrower versus Uzi?
All told, this is a forgettable movie done cheaply and quick -- and it disappeared shortly after bombing in theaters. Exterminator 2 has never been released on DVD; I got my copy from Craig over at European Trash Cinema. His DVDR is taken from the international release of the film, which features 4 scenes not in the US release. The picture's a bit blurry and washed out (as the screengrabs above attest), but it's the best we've got for now -- and I don't see a Blu Ray/Special Edition of Exterminator 2 coming out anytime soon. 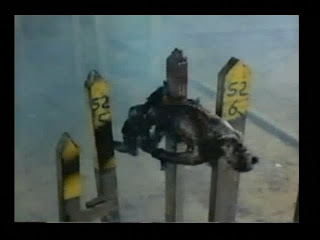 You captured it pretty well. One of the worst films ever made, bad by even really bad 80s trash movie standards. But for all that, strangely entertaining. The Peebles character was so ludicrous it was enjoyable.

I normally like Cannon movies, but from what I saw of this movie in its trailer, it didn’t seem like my kind of thing.

The first Exterminator wasn’t a vigilante picture in the Cannon style of say Death Wish IV: The Crackdown (1987) (my favourite of the series); it was more subdued and melancholy, with occasional intense moments like the meat grinder scene. The Exterminator was made in 1980, which means it’s still partly a low-affect 1970s movie. It can be suspenseful or tiresome, depending on how much stuff you like to have happening in a movie.