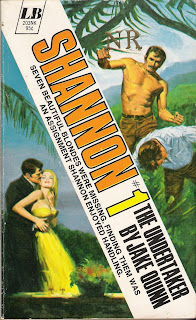 Published a month before I was born, Shannon #1 is a prime example of '70s men's adventure fiction; main character Patrick Shannon is a globetrotting superspy so irresistible to the ladies that even supermodels hit on him. He drives a sportscar, carries a pistol, works for a clandestine agency (Morituri), and is the successful author of a series of novels based on his "real-life" adventures. He employs a half-black/half-Chinese servant/best friend named "Joe-Dad" who cooks him his meals, serves him his drinks, and cleans his penthouse apartment, all while speaking in an ultra non-PC patois of "black" and "Chinese-English."

Further, Shannon's good friends with a "stacked" redheaded hooker who is in love with him and who would give up her high-paying career if he'd only commit to her, but she's thankful enough for his occasional booty call...even cancelling said high-paying jobs to run to him for a night of good lovin.' He wears all the latest styles, he's in perfect physical shape, and of course he's hung like a horse (indeed, we read that his "large cock casts a shadow over his thighs!"). And if that isn't enough '70s action for you, Shannon's bedroom has a mirrored ceiling. And mirrored walls. Even a mirrored floor!

And you thought James Bond was idealized.

This first novel takes its time getting started up; we meet Shannon on his first "real" date with his latest conquest, a high-fashion model who's in the news due to a magazine spread she's done for a jewelry line...a photo spread she did fully in the nude (!). Yes, this incredibly gorgeous blond approaches Shannon on the street and hits on him, even pulling said magazine from her purse to show off the photos. (What, this has never happened to you?) The model, Ginny, goes out with Shannon a few times; tonight will be their "big" night (read: sex), but before the wah-wah'd action can begin, Ginny's kidnapped by a horror-faced ghoul.

At first Shannon thinks he's just been stood up; he spends the night polishing off a few bottles of booze. But soon he suspects foul play, even though his Morituri superior (imaginatively named "Number One") disagrees. Shannon investigates on his own and soon discovers that his suspicions were correct, and all of it hinges upon a newly-opened funeral home across from his apartment. For there a group of lowlife scum have orchestrated the kidnappings of three other gorgeous and blonde women, stealing them away to a remote island for some nefarious purpose. Ginny is just the latest victim.

The novel soon flies straight off into the hinterlands of full-on exploitation: an island of encaged, beautiful women which is run by a hirsute dwarf who has sex with one of the women a day; a Nazi lesbian of a plastic surgeon who works for the dwarf, trying to figure out a means to amputate his stunted legs and replace them with longer ones; a ghoul with fanged teeth who wants to throw Shannon into his pit of pet crocodiles. And of course the Nazi lesbian falls in love with Shannon, despite her Nazi lesbianism. Speaking of Shannon, throughout all of this he's doing what any other Super-'70s man of action would be up to: banging all those beautiful chicks. Yes, it's all a bunch of sordid fun, and the plot could easily have been turned into a piece of grindhouse cinema.

The book suffers from the usual poor writing of the men's adventure genre. Grammar is shall we say eccentric; commas appear at random intervals, breaking up sentences for no apparent reason. Most frustratingly, the point of view bounces around like a ping-pong ball; one paragraph we're in Shannon's head, the next we're in someone else's, and back and forth. Consistency is key! But then again, changing-POV is a commonplace in trash fiction, so it's not like Shannon is unusual in this regard. However I can't make any excuse for some of the lame dialog (particularly Joe-Dad's; he's already breaking out a "Lahdy!" when we first meet him), and Quinn's insistence upon spelling everything out becomes grating.

One thing, though -- whereas the men's adventure novels of the '80s were more focused on guns and action and bloodshed, '70s men's adventure novels were a bit more focused on sex. (As an adult, guess which of the two I've grown to prefer.) Shannon #1 doesn't shirk on the sex; one early page is mostly comprised of a lovingly detailed description of Ginny's breasts! During the many and frequent sex scenes, Quinn's writing of course improves; I must say he has a talent for writing them, churning out prose as purple as a fresh bruise.

Maybe it's the post-modern reader in me, but it came to me that the entirety of Shannon #1 could be seen as the deranged hallucinations of a washed-out drunk. I mean, think of it. Patrick Shannon is a perfect he-man, an agent for a super-secretive US agency, a guy who drives a sportscar, gets hit on by supermodels, has sex with countless gorgeous women, and lives a life that would make James Bond envious. But yet, the guy is drunk throughout the entire novel. To be sure, Quinn never outright states Shannon is drunk. But damn this guy hammers the licqour throughout this novel! Whiskey (mixed with milk no less!) for breakfast, polishing off entire bottles of champaign and his ever-favorite Jameson's whiskey, hurrying to the nearest bar because he "needs" a drink (after which he finds solace for his loneliness in a hooker); these are the signs of an alcoholic, not "the wildest secret agent since James Bond."

So then, I propose an alternate reading of Shannon #1. Perhaps it all takes place in this guy's head, and, rather than a kick-ass secret agent who gets babes to spare, he's instead a recluse, a penniless hack without a cent to his name, nursing a half-empty bottle of whiskey as he sits all alone in his mirrored bedroom, with no companionship other than his increasingly-deranged fantasies...
Posted by Joe Kenney at 12:04 PM

Or you could read this as the fantasies of one of the Village's many Number 2s (my money is on the Colin Gordon one--he's such a fussbudgety old busybody, it would certainly fit.)

Or it could be a story Cancer Man (from the X-Files) came up with. Yeah, since Shannon's an American, I'll go with that.