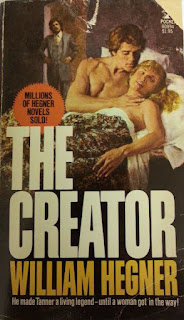 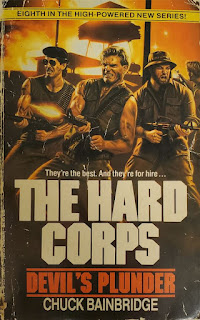 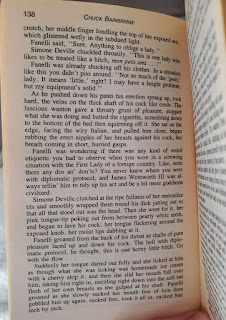 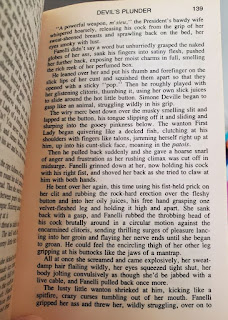 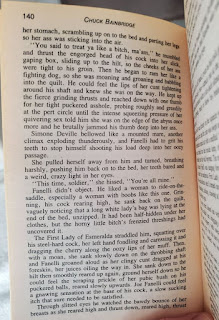 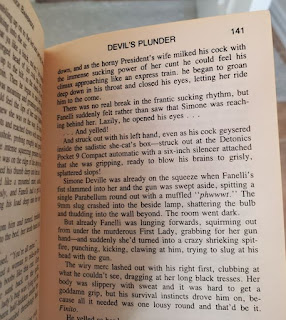 I mean ten points for “rich reek” alone. Actually there are a ton of memorable descriptions in that sleazy sequence, to the point that you figure Lowder was cacking madly as he tried to outdo himself. To say a sequence this explicit was rare in ‘80s men’s adventure would be an understatement; the majority of men’s adventure protagonists were celibate that decade, content to clean their guns while hanging out with other guys. That this sequence comes so out of the blue in Devil’s Plunder makes me regret that this was the final volume of the series. If Lowder could write wonderfully depraved stuff like this, who knows where he could’ve taken The Hard Corps.
But this was to be the final volume; after the fatal bout with Simone, the climax (the book’s climax, that is) comes off as underwhelming. It’s the usual action onslaught, with the Hard Corps blasting away in full-bore automatic hellfire. This excerpt should suffice – actually it encapulates the entire novel, with the curse-filled narrative, parenthetical gun-porn, and bloody gore: 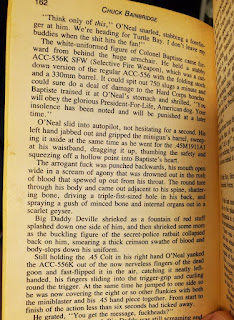 The finale inadvertently points toward the end of men’s adventure novels in general, seeing as it does a focus on “computer stuff.” A subplot has it that Deville’s son is a computer geek and has built a data warehouse of that incriminating evidence, and McShayne has been working to hack it or something. So in a way Devil’s Plunder is not only a capoff for The Hard Corps itself but for the genre as well – one last volume of high testosterone, hellfire blasting, rich-reeking men’s adventure action before the “techno-thrillers” of the ‘90s. It was also easily my favorite volume of the series, if only for the sequence with Simone Deville, though I did enjoy Fieldhouse’s take on the characters more.
Posted by Joe Kenney at 6:30 AM 1 comment: 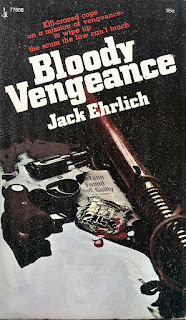 Ninja Master #8: Only The Good Die 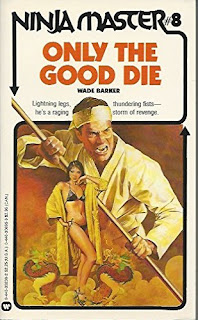 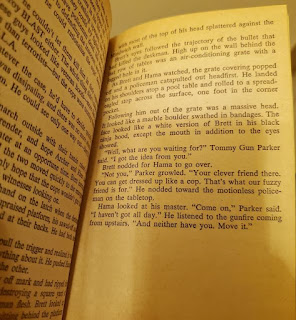 Things wrap up in an estate outside the city where the three freaks from the opening paragraph finally return. And it turns out they aren’t psychos in the purest sense; indeed, they’ve been hiring “homicidal psychopaths” to do their dirty work in the city. And their dirty work is cleaning up the streets. These three men have suffered their share of misfortune due to rampant crime and have decided to go outside the law to restore law and order. To this end they’ve started a variety of gang wars, hoping to use their homicidal psychos to stir shit up. Of course, the resulting loss of innocent life is just seen as collateral damage. These are the guys who capture Rhea in the finale – despite her being an asskicking ninja babe in her own right – but Brett and Jeff are there to save the day. The final sequence is very odd, as Brett wants the main killer to suffer horribly, and tortures him via drowning. Overall a strange, somewhat off-putting way to finish off the Ninja Master series.
A year or so later Brett Wallace was to return in Year Of The Ninja Master, also published by Warner. Since I took so long to read Ninja Master I think I’ll dive into the first volume of that next series posthaste.
Posted by Joe Kenney at 6:30 AM No comments: 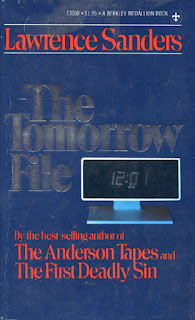 The sex scenes go for the same clipped prose effect: 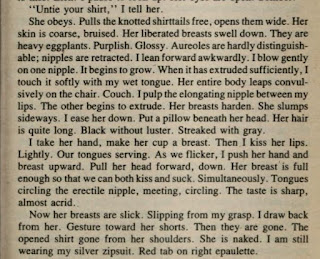 Granted, that excerpt is from late in the novel, when Nick is under the sway of a trial version of the Ultimate Pleasure drug. But sex, while not super explicit, is very central to this 1998; people “use” each other casually, and there’s none of the restrictions of today (or the real 1998, of course). In fact, it seems clear that most everyone is sleeping with each other casually, with no emotional attachments. Women proposition men just as frequently as men proposition women. This sex-focused aspect extends to the fashions (we learn that a “flying penis” icon is a new fashion accessory) and to TV – another super-weird bit, where Nick visits an old woman who sews as she watches her favorite TV program, “The Twenty-Six Positions.” Tonight’s episode: masturbation. Next week’s: Anal sex! (Nick informs us, again as if speaking to “Rip Van Winkles,” that television became increasingly permissive in the ’70, to the extent that graphic sex is shown.)
And to futher the “future 1970s” vibe, drugs are everywhere. Nick takes – and creates – a ton of drugs in this book. Given there are no restrictions (or inhibitions), people can buy “cannabis cigarettes” and indulge in basically any form of recreational drug. We also learn that there’s an “addictive soft drink” called Smack that literally everyone drinks; there are innumerable instances where Nick mixes himself “a vodka and Smack.” Coupled with the rampant mechanization of this future, as well as the fact that everything seems to be made of plastic, we are very much in a Spaced Out type of ultramod future; there were some parts of The Tomorrow File that had me certain Lawrence Sanders was aware of Haus Rucker and their designs. A recurring bit is that practically everything begins with “plasti” or “petro,” being that these two substances are used to create everything from food to furniture. My favorite in this regard was “plastiforks;” surely there were plastic forks in 1975, they couldn’t have seemed that “futuristic” at the time! And also this is very much a ‘70s future in the fashion regard, with government employees wearing jumpsuits, aka “zipsuits.”
But as you can see, there is a darkly humorous undercurrent to the novel. Nick has a sense of humor, but for the most part everything is pretty serious here…it’s just hidden humor. For example, I’m positive I found an in-joke. Early in the book Nick tells us of another of his projects, the IMP, a sort of molecular ID verification concept. At one point he calls up an underling and tells them that if they need any help with the IMP to “call Jim Phelps.” Of course, “Jim Phelps” was the name of the character Peter Graves played in Mission: Impossible, and Phelps’s crew was called the Impossible Missions Force…or “IMF.” I will accept no other explanation than that this was a clear in-joke from Sanders. And then on the more lowbrow tip, one of the titles a person can acquire in this future is “AssDepDirRad,” which just sounds so juvenile that it has to be another buried joke. A less subtle recurring joke is how the food – all of it artificial and created out of petroleum or other chemicals – looks great but tastes terrible. There’s also recurring humor in the various ultra-bizarre dolls Nick’s dad creates, from a doll that pukes to a doll that dies (the Die-Dee Doll) and must be buried; it even has upsell accessories like a shovel and coffin!
As I read The Tomorrow File it dawned on me that the only thing Sanders really got wrong was the date: if anything, we are getting closer and closer to the 1998 he depicts here. The most prescient thing in this regard is the “politician/scientist” class Sanders presents; in our Covid world of “trust the science,” in which “the science” changes depending on the latest poll results, Nick Flair and his colleauges are quite similar to real-life career politician/scientists like Anthony Fauci. I mean just read this and tell me if it doesn’t encapsulate the mindset of the activist “scientists” of our recent era: 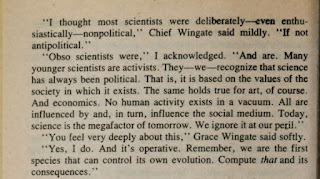 Not only that, but as mentioned this 1998 is an Orwellian hellhole…if you run afoul of the government. As Voltaire said, it is very dangerous to be right when the government is wrong. You will be caught and “drained” (ie interrogated), and then your “corpus” (ie body) will be sent to some experimental compound “for the good of society,” where you will ultimately “stop” (ie die) as the result of some experiment, perhaps the recipient of a new chemical blood infusion. And you’ll do all of this after willingly signing an acceptance form – willing due to the fact that you’ve been drugged into compliance! 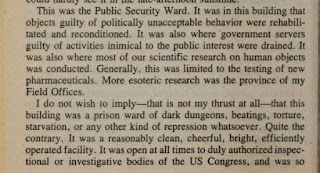 This is the iron fist behind the sex-and-drugs future of The Tomorrow File, and as expected Nick will ultimately get a first-hand view. And as we go along with him we realize it isn’t so much that Sanders incorrectly predicted what 1998 would be like; it’s just that he got his year wrong. He clearly saw the way the future was headed. Sanders even manages to predict the proposed Covid Visas, which ultimately might lock into every facet of our lives, including our bank accounts, only granting “access” once we’ve been approved by a third party; in The Tomorrow File it’s called a “BIN card,” and it operates in the same capacity. So clearly Sanders’s view of the future is the same as Orwell’s: “a boot stamping on a human face – forever.” But no one will ever learn anything from 1984 or The Tomorrow File. The US will continue on its path into leftist bureacracy, crushing indepence and free thought every step of the way. Compare the above excerpt to the plight of the January 6 protesters, deemed “domestic terrorists” and held without bail in Federal custody. Political prisoners. In the United States. And that’s okay in today’s world…because, like the “obso” terrorists in The Tomorrow File, their protests ran counter to the greater good. And who tells us what the “greater good” is? Why, the ruling class does, of course.
Perhaps that’s one thing Sanders delivers more than Orwell did (it’s been like thirty years since I read Orwell): he gives a glimpse of what it’s like to be a part of the ruling class. Nick Flair is one of the elite, a scientist who can effect political and social change, and who is 100% aligned with progressivism. And he is accordingly amoral, as are all the other brilliant youth around him, solely devoted to “serving” and moving the human race down the evolutionary path. The drugs and easy sex are just fringe benefits. But, as Nick ultimately discovers, humanity has been lost. I still think this theme could’ve been better elaborated via the obso plot in Book X than by the “fling with the First Lady” plot in Book Z, but still…I started this review thinking I’d pick on the things that bugged me, but the more I thought about it the more I realized The Tomorrow File really is a great novel. I mean it drew me in, it kept me interested, and it made me think about our own world…so really I don’t know what else would make for a great novel.
There were a few paperback editions over the years, but The Tomorrow File seems to be forgotten now. I’ve even done hard searches for “forgotten science fiction novels” and haven’t seen it mentioned, so it hasn’t resonated at all over the decades. Above I wondered if Lawrence Sanders was crushed by this; I’d love to know his own thoughts on the book and how it performed. He never again delivered a full sci-fi novel; in 1984 he published The Passion Of Molly T, a thriller set in the “feminist near future” of the late ‘80s, but it doesn’t look to be anywhere on the worldbuilding level of The Tomorrow File. But if you’re into ‘70s science fiction, and ‘70s fiction in general, then I’d definitely recommend The Tomorrow File. In fact I imagine it would improve even on a second reading, something I plan to do someday.
Posted by Joe Kenney at 6:30 AM 4 comments: