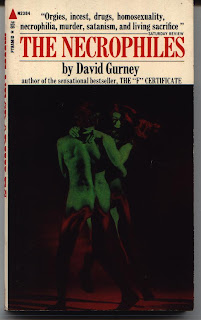 The Necrophiles, by David Gurney
January, 1971 Pyramid Books
(Original New English Library publication, 1969)
Orgies, incest, drugs, homosexuality, necrophilia, murder, satanism, and living sacrifice...
My god, what more could you ask for?? Usually cover blurbs oversell a novel's more sordid aspects, but in the case of The Necrophiles, the cover blurb for once tells the whole truth -- this is one twisted little novel, one that fully lives up to the publisher's hyperbole.
The necrophiles in question are a group of teens living in the countryside outside of London. A mix of four boys and two girls, they enjoy meeting weekly in a secluded area of the woods and getting drunk and stoned and engaging in group sex. Theo is the de facto leader of the group, one of those Dionysian types with looks that appeal to both men and women. Then there's Johnny, Theo's second in command, a slow-witted sort who sets everything in motion when he comes upon some grisly crime-scene photos which he shares with the group.
These gory photos excite and arouse the group, which leads to lots of weird shenanigans in which Theo will tell one of the girls something like "I'd like to do that to you," showing her a photo of an eviscerated, decapitated body, and the girl gets all weak in the knees. Did I mention this is a twisted book? Eventually the photos no longer do the trick, and Theo announces that the group must move on to the real thing -- they need themselves some real corpses.

The group breaks into a morgue and gets their hands on three fresh corpses. A madness descends upon them and they begin hacking apart the bodies, taking away grisly trophies in the aftermath. (By the way, these are our protagonists.) Unbeknownst to the others, Theo actually sells his collected viscera to a group of posh London homosexuals. Later, Theo reveals to Johnny that he's a sort of kept man; in exchange for money he travels about Europe and the US with wealthy and gay businessmen, and on a recent trip to New York (Woodstock, no less!), Theo participated in an actual Satanic ritual with his latest paramour.
Theo describes the scene: a mass of robed and masked Satanists in the misty woods, each of them "jabbed" with a psychedelic drug; they come to a clearing in which a nude woman is chained to a rock, a figure above her with a raised dagger; the figure seems to become a horned demon before Theo's eyes, though it must be the drugs; but then Theo looks down at himself and sees that he too is just as shaggy-haired as the horned demon. Theo comes out of the trip confused, reeling, and inspired with a sure-fire way to make some cash: these freaks would pay mucho dinero for the viscera of fresh corpses. Hence Theo's selling of those fresh guts in that first morgue-raid. Now Theo proposes a business deal with Johnny: together they can raid morgues and sell the goods to those homosexual London Satanists.
It all spirals out of control, with in-fighting and treachery, and an incredibly grisly and disturbing finale in which our "necrophiles" discover they're nothing to match the real thing. Gurney writes with the usual emotionless reserve I find in most British genre fiction, yet his narrative also reminds me a bit of Stephen King, in that he trades off on pages and pages of unnecessary detail about country-bumpkin characters with moments of chilling horror. But this would be Stephen King at his most coked-out, as Gurney pulls no punches. There's graphic sex here and there, but it's delivered just as gruesomely as the horror scenes.
The Pyramid Books edition is shown above; the novel was originally published by New English Library. Here's the cover: 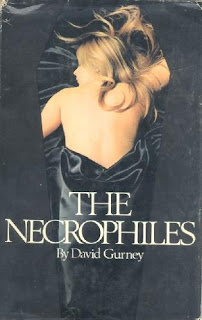 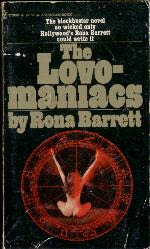 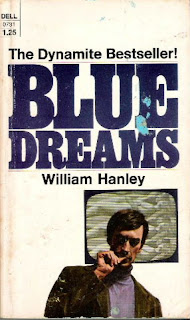 The Happening At San Remo 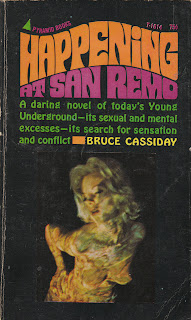 The Happening At San Remo, by Bruce Cassiday
August, 1967 Pyramid Books
Published smack in the middle of the Summer of Love, The Happening At San Remo seems designed to cash in on the burgeoning psychedelic movement. The front and back cover promise a sexual romp through the turned-on underground, filled with drugs and rock and even mystic rites. And the book does deliver on this promise, to a certain degree; only we're burdened with a buzzkill of a narrator.
Brendan Tom is said narrator, one of those too-perfect main characters: the leader of a surfadelic trio, Tom is a "swordsman" who is known for getting all the girls. He's cynical, flippant, too smart for his own good, and known as a "genius" in the underground to boot. And, of course, we are told (by Tom and the girls he's with) how "big" the guy is. Yes, just a generic idealized character...but one who doesn't partake of LSD and in fact seems to look down upon those who do. For that is the hidden thing in The Happening At San Remo -- dope and LSD are seen as tools of oppression and control, only used by idiots or those who want to exploit them.
In a way, then, the book is a bit prescient in that it looks at the negative side of the turned-on generation. But come on! If I wanted to read that kind of a book, I'd pick up any number of books published in more recent years, books written by "I wasn't there but I'm gonna judge them anyway" idiots who get their kicks mocking the hippies and their now-laughable views on life. This novel was published while the movement was just starting, and so I wanted something by a person into the whole thing, something like Ed Sanders's Shards Of God, only with a more cohesive narrative.
Anyway. Brendan Tom and his surfer bandmates come to San Remo, California, where they are to play a concert at a fictional university. The locals don't want "their kind" playing around here, and so Tom is accosted by a variety of thugs and cops. More importantly he encounters Evita Navarra, a chopper-riding beauty of Mexican ancestry who leads a gang of Hell's Angel-type chicks; Evita drops acid and smokes dope with abandon and seduces Tom in the graveyard of her ancestors. Evita lives with a wheelchair-bound psychologist who is patterened after Timothy Leary; the guy even has the same sort of psychedelic outhouse as Leary did in his Millbrook estate.
Brendan Tom soon understands that Evita has a special hold on her followers; the town is comprised of Evita's gang of drugged-out rockers and "the elegants," ie square-cut college kids who nonetheless enjoy toking dope. Evita wants to unite the two groups against the locals and force a riot so that Tom and his bandmates can have their concert. Gradually the novel takes on the more mystical aspects of LSD, as Evita, holding congress to the combined groups on the San Remo beach, leads them through a rites ceremony which is outright stolen from the ancient Eleusian Mysteries. Evita and all of her followers are of course strung out on LSD during this; everyone save our buzzkill narrator Brendan Tom, of course, who leads us through the proceedings with a jaundiced eye.
It turns out though that this rites sequence has significant bearing on the novel's denouement. After much page-filling nonsense with Brendan Tom's vain attempts to deflower a local rich girl, Evita and her Leary-clone engender a campus sit-in. Here Tom learns their true goal; Evita and the good doctor could care less about Brendan Tom's concert. They instead have only wanted to create a diversion so they could steal documents from the university's administration office. Tom catches Evita in the act of this and she seduces him again, the best way to cloud any guy's mind. Then she spikes his coffee with LSD.
The novel's only psychedelic sequence ensues as Brendan Tom staggers about the woodside talking to Jesus and Satan. The sequence ends with Tom, still under the influence, setting fire to the administration building. Once he comes back to himself he's in jail and he realizes he's been a dupe all along: just another LSD-brainwashed soldier in Evita's army. But Tom manages to get out of jail in a scene that seems to have come out of Rodney Dangerfield's Back To School.
I wish I could say that The Happening At San Remo is a brain-busting trip into the psychedelic sixties, but unfortunately it's a slow-moving affair, overfilled with banal passages in which Brendan Tom graces us with egotistical stories of his background, his opinions on the Vietnam war, his theories on life. Which is funny, because it's that sort of drek which is so rightfully scorned by the hippie-haters of today, whereas the sex-and-drugs stuff Brendan Tom himself scorns will always guarantee a readership. Right?
Posted by Joe Kenney at 8:28 AM No comments: