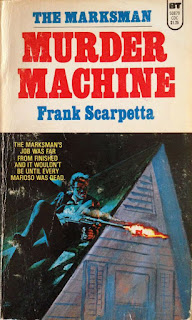 Murder Machine, by Frank Scarpetta
No month stated, 1975  Belmont Tower
Russell Smith turns in another volume of The Marksman that’s just as crazed as his others, with the added bonus that Murder Machine features what I’m sure is some intentional in-jokery, as well as a self-awareness that’s very unique for the series. My assumption is by this point the manuscripts Smith had written the year before were coming out in paperback, and he saw how editor Peter McCurtin was butchering them, changing them wily-nily into Sharpshooter novels, and for this book Smith decided to hell with it – he was just going to have some fun.
Lynn Munroe apty summarizes Murder Machine as a “a schizoid read,” but he also detects the hand of fellow series ghostwriter George Harmon Smith in the work. I personally didn’t detect Harmon Smith’s style at all – to me his style is very noticeable, a sort of sub-John Gardner, with very literate prose but a tendency to overdescribe the most mundane of actions. See for example #18: Icepick In The Spine, which was certainly the work of George Harmon Smith. Murder Machine on the other hand has the stamp of the other Smith on the series: Russell, with the same loosey-goosey approach to plot, a bunch of lowlife loudmouth Mafioso who talk like rejected Jerky Boys characters, and a “hero” who comes off like a monster. I mean Russell Smith’s unique style is evident throughout the book, like for example: 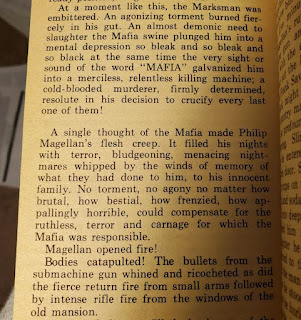 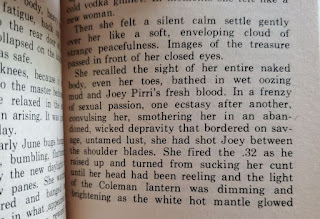 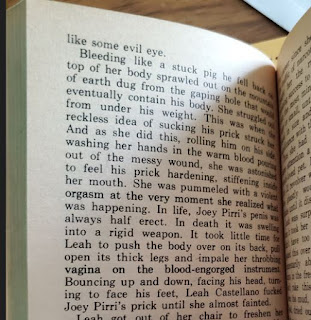 Magellan himself even gets laid this time, a rare event to be sure, but it happens off-page. It’s courtesy an Asian hooker Magellan gets in his hotel (as with every other Russell Smith installment, the majority of the tale features Magellan checking into and out of various hotels)…who, apropos of nothing, tries to lift Magellan’s wallet the next morning. But Magellan is only pretending to sleep, and catches her in the act. He drugs her with his usual assortment of syringes, shaves her head and “pubic mound,” and then even more randomly tapes her “from ankles to thighs” with adhesive tape, “like a mummy,” and tosses her uncoscious form in the elevator and sends it to the lobby! Just another ultra-bizarre scene of random sadism, but that’s what we expect from Russell Smith. Oh and Magellan secretly watches the lez action with Leah later in the book, getting super turned on: “It was an incredible orgy scene Magellan would not soon forget. He’d not seen anything like it in his life!”
As ever Magellan totes around his “artilery case.” For the first time ever (I believe), we’re given a list of its contents: 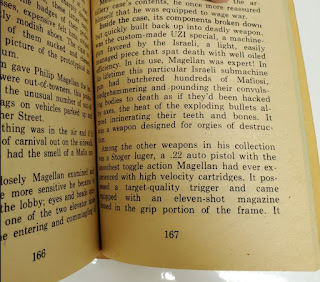 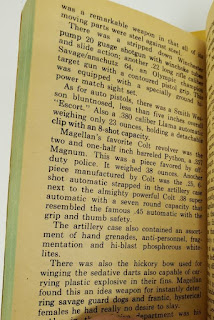 In addition to this we’re informed that a photo of Magellan’s wife and son are on the inside lid of the case, as if “guarding” his weapons. As stated there is a big focus in Murder Machine on the loss that made Philip Magellan become The Marksman in the first place. This I assume is there to explain away his sadism, but as the drugging and shaving of the hooker would indicate, the guy’s just nuts – I mean the hooker has absolutely nothing to do with the Mafia.
As expected, everything “climaxes” exactly how every previous Russell Smith installment has: all the villains do Magellan the courtesy of conveniently gathering in one location so he can blitz them from afar. Smith shows no mercy in his rushed finale – no mercy for the reader, either, telling us almost in passing of the bloody deaths of his various one-off characters. The most notable bit here is the “eerie calm” Magellan always feels after one of his massacres, which fills him with a sort of profundity.
Man, what a crazy one this was – almost like a “greatest hits” of Russell Smith’s work on the series. It went through absolutely zero editing and you get the sense that they just printed everything straight off of his typewritten manuscript. But for that reason alone it was pretty entertaining. Oh and finally, Ken Barr’s cover illustration actually (sort of) illustrates a moment in the book; during an action bit where Magellan finds out that a private eye force is closing in on him, he goes up on a rooftop and knocks out a would-be sniper. Russell Smith pointedly mentions the “door” on the roof, which makes me figure we have here another instance of editor Peter McCurtin directing his author to include a specific scene, so there would be a part in the book to match the already-commissioned cover art – a la McCurtin giving Len Levinson a similar direction for Night Of The Assassins, in a bit Len later spoofed in The Last Buffoon.
Posted by Joe Kenney at 6:30 AM 4 comments: 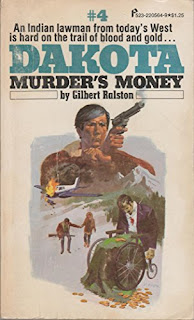 In The Pulp Fiction Trenches 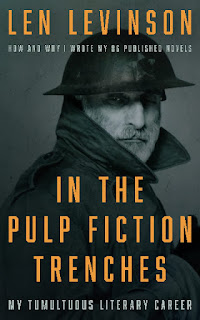 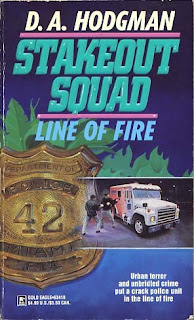 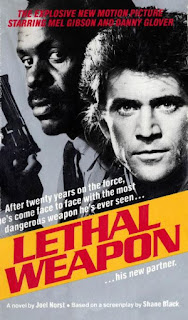 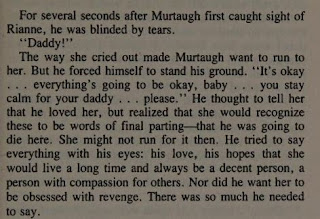 The finale is especially different and an indication of how much change the script went through in production – and how much society has changed as well. Believe it or not, but Mitchell’s novel – and presumably Shane Black’s original script – ends with the Murtaugh family and Riggs going to church on Chrismas day. With Murtaugh introducing Riggs to the congregation and the preacher grumbling that Riggs hasn’t been there for a long time. Not only is it a lame way to end the story, but it’s also an indication of how much things have changed…I mean imagine a Hollywood action film ending with the heroes going to church. I guess even in ’87 this would’ve seemed odd, and it would seem positively bizarre today. But then in a way I appreciated it for this very reason. I’m not a religious man by any means, but it seems clear to me that western society has sort of lost its way with the abandonment of Christianity – I still recall my mind being blown last year when I was into all that Space Race stuff and saw how the astronauts would pray during their missions and whatnot. Imagine such a thing happening today! They’d probably get sued for mixing religion with “the science.”
Well anyway, I really did enjoy Lethal Weapon. It joins the ranks of Hickey & Boggs and Invasion U.S.A. as a novelization that’s better than the film it’s based on. Mitchell’s writing is strong throughout, and I look forward to reading another of his novelizations I have, for the Chuck Norris vehicle Delta Force (which I saw in a jam-packed theater when it was released in 1985 – and the audience enjoyed the hell out of it in a totally non-ironic way).
Posted by Joe Kenney at 6:30 AM 5 comments: