Bronson: Streets Of Blood (aka Bronson #2) 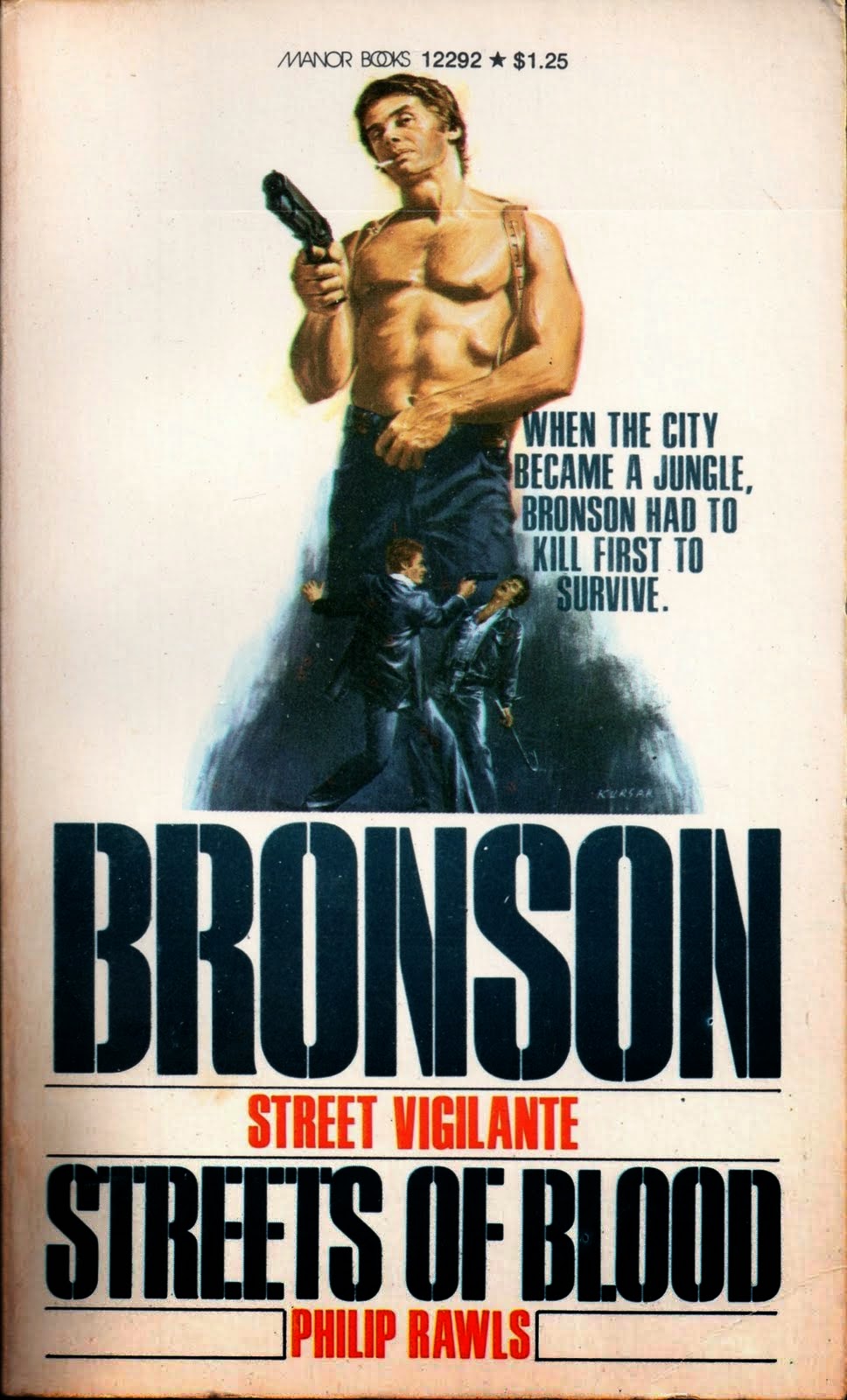 Not picking up from the incredible first volume, Bronson: Streets Of Blood has nothing to do with Bronson: Blind Rage and indeed doesn’t even feature the same protagonist, even though this one also happens to be named Richard Bronson. But then, I knew that going in, as “Philip Rawls” this time is in reality Len Levinson, who told me a long time ago that he had never even heard of Blind Rage, let alone read it.

In fact, I mentioned this Bronson novel the first time I spoke to Len on the phone. His reaction was a slight pause and then, “Oh yeah, I forgot about that one.” In some ways, Streets Of Blood is like the fourth Sharpshooter installment Len never wrote, and sometimes picks up from elements in Headcrusher. This is mostly in the nihilistic feel of the protagonist, who knows his days are numbered, but vows to keep killing scum no matter what.

Now, Streets Of Blood might have a nihilistic feel, but it’s nowhere as caustic, violent, or sadistic as the first volume of this “series.” I rank Blind Rage as one of the best ‘70s pulp crime novels I’ve ever read, mostly due to its insane vibe, in its “fight fire with fire” mentality. Of all the revenge novels I’ve read, I think it best captures how a man could be pushed to insane lengths after his family has been murdered, and how the man himself could become even more murderous than the scum he’s hunting.

Len’s Richard Bronson is grim and dour, but not insane. Well, comparitively speaking so far as the previous novel’s Richard Bronson went. Len’s Bronson moved to NYC two years ago, after his wife and two kids were murdered. He owns his own engineering firm and lives in a penthouse suite in Manhattan, but at night he goes out and kills muggers and rapists. Bronson has been celibate since his wife was killed two years before (the novel clearly takes place in 1974, as October, 1972 is often mentioned as the date in which his family was killed).

This celibacy causes some issues with Bronson’s hotstuff next door neighor, Natalie Taylor, who happens to be a model. She starts hitting on Bronson as soon as she’s introduced into the narrative, practically demanding he come next door for some hot sex. Bronson constantly puts her down, and poor Natalie has to go back to her apartment to bake banana bread in sublimation and pine over Bronson, the first “real man” she’s met in the city in years.

There isn’t much action per se in the novel; Bronson goes out in his trenchcoat, armed with a Browning with silencer, and guns down muggers and rapists. He isn’t very smart about his methods, though, as within the first several pages he’s already been figured out by a cop. This is Detective Ronald Jenkins, who responds to a call about a shooting in Central Park, and happens to see Bronson walking out of there. He stops him and gets his business card in case further questioning arises, and when the witness, a girl who was almost raped before Bronson descended upon the scene, gives Jenkins her description of her rescuer, Jenkins immediately realizes it was Bronson.

Len goes an unexpected route with this, having Jenkins and his boss Lt. Levine pondering if they should bring Bronson in or let him continue his private war – just as long as he never harms the innocent. Meanwhile Bronson continues to kill, while getting closer to Natalie, but he runs afoul of her when he tries to get her to lie for him, in case increasingly-nosy Jenkins ever tries to check Bronson’s whereabouts. It all comes down with Natalie pissed at Bronson; when she demands Bronson tell him what exactly he’s trying to get her to cover for him for, he lies that he was having an affair with a client’s wife on the night in question.

Midway through the novel stops being a Death Wish riff and becomes that fourth Sharpshooter novel Len never wrote. Bronson kills a couple punks, one of whom happens to be the nephew of Big Frank Scarletti, a Mafia boss who runs his mini-empire from a bar. The novel becomes more of an anti-Mafia pulp crime deal, with Scarletti sending hitmen after Bronson, and Bronson taking them out, after which he vows to kill Scarletti himself.

Meanwhile Jenkins has fully come over to Bronson’s side, protecting him. In a way Jenkins is a lot like Len’s version of Ryker, in The Terrorists, a tough cop who isn’t dirty but doesn’t mind bending the rules to see justice done. For example, there’s a goofy part where Bronson shoots down a Mafia torpedo and demands to talk to Jenkins when the cops arrive on the scene; Jenkins merely sets up and falsely backdates a gun permit for Bronson and takes responsibility for “forgetting” to renew it. Jenkins even teams up with Bronson in the finale, both of them wanting to see Scarpetti dead.

Also, Natalie Jones comes back over to Bronson’s side; she inadvertently saves him from that mob torpedo, seeing the hitman raise his gun at Bronson while he’s walking down the street, and though she never does find out for sure that Bronson is the mysterious crime fighter the news is always talking about, she does find out that he was lying about having an affair. Thusly she forgives him, leading up to one of the more explicit sex scenes I’ve yet read in one of Len’s novels, complete with Natalie’s endearing request, “I want you to come inside me.”

The finale again calls back to The Sharpshooter, with Bronson (who in Len’s version is a former ‘Nam hero) breaking out a sniper rifle like a regular Johnny Rock and lying in ambush with Jenkins. And by the way our hero cop also sees some bedroom shenanigans, despite being happily married, going undercover in the Scarpetti-owned bar and scoring with the busty, “nymphomaniac” bartender there, who ends up falling in love with him. But all such subplots are obliterated by the finale, which has Bronson and Jenkins blowing away Scarpetti and goons from afar, after which Bronson can happily continue with his war on the streets.

Wrapping up, I can sort of see why Len had pretty much forgotten Streets Of Blood when I spoke to him on the phone. While it’s entertaining and fun, it lacks any truly outrageous or unforgettable moments. It does though have that “Levinson Element” I enjoy, with characters who seem to exist off of the page, and I like how he didn’t waste the reader’s time with Detective Jenkins trying to bring in Bronson. It was a lot more interesting and unexpected to have the two team up.

I didn’t pester Len to write up a piece on this one, mostly because at the time I was writing this review he was on vacation in New York, and also because he already wrote a piece on it for Jack Badelaire’s Post Modern Pulps blog.

And I’d still love to know who wrote Bronson: Blind Rage!
Posted by Joe Kenney at 6:30 AM

You know naming a vigilante character Bronson is kind of...I don't know...blatant example of milking all the cash you can from a popular trend.

As I read each one of these marvelous reviews I find myself wishing I'd written something you could cover.

Damn! I read that way back in the eighties. It really isn't very good, but it is at least written with competence.

I saw a copy of it in a second-hand book store once, but didn't buy it. I didn't mind so much that it was derivative, but they seemed to be trying to make the cribbing as blatant and obvious as possible. The protagonist even had the same name as the star of Death Wish, and the back cover blurb said that he was a bleeding heart liberal before his family got murdered.

It was obviously part of a series, but I didn't know until now whether there were any other episodes.

I'm surprised there wasn't a lawsuit. This series' premise is more imitative of Death Wish than Captain Marvel/Shazam ever was of Superman. But maybe it didn't last long enough to cause a blip on anybody's radar. Also, by the mid-1970s, there were more "vengeful vigilante" action heroes on the market than you could point an AutoMag at. You can't sue everybody.