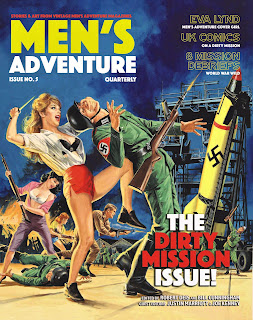 Men’s Adventure Quartlery #5, edited by Robert Deis and Bill Cunningham
June, 2022  Subtropic Productions
Every issue of Men’s Adventure Quarterly has been great, but this one focuses on the wild WWII yarns the men’s mags were mostly known for. In this regard I feel that Men’s Adventure Quartlery #5 most captures the vibe of an actual men’s adventure magazine. The sort of thing vets read twenty years after the war, while they were on a break at their factory jobs or trying to tune out their nagging wives. “Ah, those lace-panty commando broads – the good old days!”
This issue is set up differently than the previous four; it’s almost two separate books. The first half is along the lines of those men’s mag-themed trade paperbacks that were popular some years ago, more focused on the art, artists, and photography. The second half is like the previous issues of MAQ, featuring stories. One thing missing this time is an intro for each story, which I missed. But all told this volume is longer than the other four, with as mentioned more of a focus on art in the first half. I found this first half interesting, but I’ve always been more about the stories in men’s adventure magazines; in fact, I usually don’t pay much attention to the covers or the interior illustrations, other than to momentarily appreciate them.
It’s all visually arresting, though – and I don’t just mean the beefcake photos of ubiquitous men’s mag model Eva Lynd! Bob provides an interesting overview of her career, and we see more of Eva in some artwork courtesy Norm Eastman, the men’s mag artist most known today for his illustrations for “the sweats,” with women in bondage or being otherwise sorely mistreated. There’s a lot of photography and artwork in this first section, to the extent that I really does come off like a separate book…sort of a “making of” peek into how the men’s adventure mags were produced. A cool piece on war comics by Justin Marriott can also be found here; a bit disconnected from the Eva Lynd/men’s mag art material, but still pretty cool if you are into war comics. Especially British ones! Unfortunately I’m not, but as usual Justin’s enthusiasm is enough to make one interested in the subject.
After an article from a wartime-era issue of True on “The Filthy Thirteen,” the real-life inspiration for The Dirty Dozen, we get to the stories. First up is the story featured on the cover, “The Wild Raid Of Gibbons’s Lace Panty Commandos,” by Jim McDonald. I reviewed this one several years ago as part of my Girls With Guns men’s mag feature. My copy is in a reprint from the December 1973 issue of Man’s Story, which also featured “Lace Panty Commandos” on the cover. Bob and Bill don’t include this later cover in this issue of MAQ. Here it is: 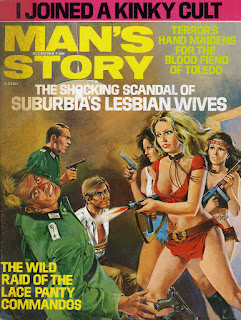 Many thanks for your review of the MEN'S ADVENTURE QUARTERLY #5, Joe -- and for the intro you wrote for it and the story ideas you provided. One of us should go meet with writer Donald Honig while he's still around. He's one of the last of the regular writers for the Martin Goodman "Diamond Line" magazines who is still alive. My friend Eva Lynd, who is featured in the first half of MAQ #5, is also still alive and well. I talk to them both fairly often by phone. Wyatt Doyle and I already did a book featuring Eva, as you know, titled EVA: MEN'S ADVENTURE SUPERMODEL. I'm thinking I may want to do a book featuring Don Honig men's adventure mag stories. Thanks again for your continued support for my labors of love. Cheers!

I don't know if I've ever mentioned it here, but there's a surprisingly early "commando broads" film (at least the last third of it) called FIVE GATES TO HELL.
It's very little known, but it is on DVD. I won't go into all of it, but that isn't even the only way it's a very early film.