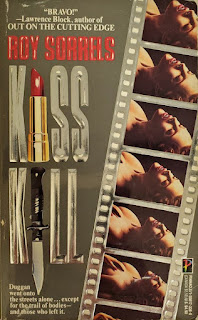 Kiss Kill, by Roy Sorrels
April, 1990  Pinnacle Books
For a book with a cover blurb by none other than Lawrence Block, Kiss Kill is very obscure these days, and likely went under the radar even back in 1990. I discovered it a few years ago, and only because I was searching for everything Pinnacle published in the late ‘80s, once the imprint was run by Zebra Books. This was also how I discovered the similarly-obscure Steel Lightning series. But it was only recently that I actually picked up a copy of Kiss Kill, given that I’ve been on a bit of a “cop thriller” kick. It sounded interesting, even if it was outside my safe space of ‘70s crime-pulp…I mean 1990 seems “new” to me, given that I pretty much live in the 1970s.
But other than an occasional mention of fax machines, crack, or a character wearing a Batman T-shirt (those were incredibly ubiquitous at the time – in fact I remember a female comedian at the time saying that she didn’t plan to actually go see the Tim Burton film; she’d just see it frame by frame on the T-shirts of the people who passed by her on the street!), Kiss Kill could just as easily be set in the ‘70s. Actually, the novel is most reminiscent of the late ‘80s/early ‘90s revisions Nelson DeMille did of his Ryker and Keller books, ie The Smack Man and Night Of The Phoenix. Just as DeMille took the grungy midtown Manhattan of the original ‘70s books and updated it to the grungy Lower East Side of the late ‘80s, so too does Kiss Kill mostly occur in this downtrodden area. In fact Midtown and Times Square are rarely mentioned, with most of the action taking place along Third Avenue and environs.
And this is truly a “New York” novel. Author Roy Sorrels is certainly familiar with the city, and brings it to life in all its tawdry splendor. I’m no expert on the city – again, the New York that exists in my mind is the one I read about in novels from the 1970s – but I was always under the impression that New York cleaned up its act by the ‘80s. Kiss Kill dispels that notion, and it would appear that 1989 (the year the events seem to take place) was just as tawdry as, say, 1974. It would appear that the city didn’t really clean up its act until Rudy Giuliani was elected in 1994, after which all those tawdry places became Disneyfied. Now that I think of it, Steel Lightning also took place in this same grungy, immediately pre-Giuliani Lower East Side.
But let’s get back to how scarce Kiss Kill is, with so little detail available about it. There are only two reviews on Amazon as of this writing, the first just a rehash of the back cover copy, the other by a person saying it’s “the best mystery/suspense novel” they’ve ever read. Speaking of the back cover copy, what’s funny about it is that it sort of gives an idea of the plot, while being very misleading; it was certainly written by some editor at Pinnacle/Zebra who only gave the book a cursory glance. Here it is: 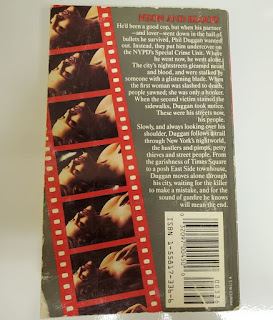 Interesting! Thanks for the heads up on on Sorrels.

I looked up Sorrels in Amazon, and was delighted to find that he's got a contribution in the July '88 issue of Rod Serling's Twilight Zone Magazine. As I'm currently reading my complete collection of that mag in order of publication, I'll let you know if his story is any good. Won't get to it for a while though ... .

" but I was always under the impression that New York cleaned up its act by the ‘80s."

That impression goes away quickly when one watches the opening sequence to The Equalizer. The quintessential NYC in the 80's show.

Hey, do you know how long it takes for Tocsin Press to review a submission? I sent them a proposal, but haven't even gotten a note saying they received it.

Thanks for the comments, everyone! And Dan, I believe Tocsin is a bit swamped at the moment, but hopefully you should hear something soon.