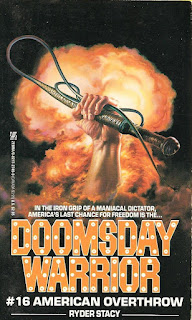 Man, that last sentence says it all…it sure does, Rockson. It sure does.
Posted by Joe Kenney at 6:30 AM

I can't delete this said...

Thank you for continuing on with this series, I discovered it in audio-book format, and listen to it once a year, and for as crazy as it gets, it's one of my favorite things. 3 books to go, and they're some of the strangest ones yet, and that's hard to say given where the entire series has gone so far, but trust me, they're worth all finishing, and if you haven't done the graphic audio versions of them, they are so worth a listen, full cast, sound effects, etc..

I can't delete this said...

Also, thank you for your blog, and multitude of other books you have turned me onto over the years..

Hi, thanks a lot for the comment! I actually have heard several of the Graphic Audio adaptations, and they're pretty good! To the extent that I "hear" that actor's voice when I read Rockson's dialog. I'm looking forward to finishing this series -- especially the "Dream" volume that's coming up.