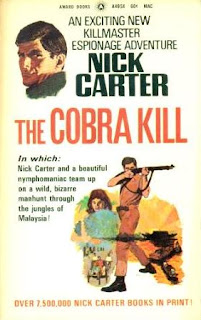 The Cobra Kill, by Nick Carter
No month stated, 1969
Within a few pages of this installment of Nick Carter: Killmaster, written by series veteran Manning Lee Stokes, I realized that it was actually sort of a sequel to an earlier Stokes yarn, possibly The Red Guard (1967). I am assuming that earlier volume, which I haven’t yet read, features Nick (as he was referred to in these earlier volumes) in Hong Kong, up against the Red Chinese and some Chinese tongs. The Cobra Kill opens with Nick once again in Hong Kong, this time on vacation, but his cover’s been blown and he’s on the run from various Tongs and Commies who are out to get him – as revenge for the incidents in that previous volume.  Or maybe it was another Stokes volume...maybe even one I’ve read but have forgotten!
After this establishing setup, though, The Cobra Kill becomes its own novel, with no further references to the events of The Red Guard. In fact the reader doesn’t even need to have read the earlier book; it’s not like the plot of this one hinges on anything that happened in it. Nick will be out of Hong Kong and on into Indonesia and Malaysia for the majority of the novel. But actually it’s not even “Nick” this time…sadly, friends, we’ve now moved into the first-person years of Nick Carter: Killmaster, which would last until the mid 1980s. Nick Carter himself tells us the story, and thankfully he doesn’t prove to be as much of a bore as he was in the other first-person Killmaster novels I’ve read by Manning Lee Stokes, The Red Rays and The Black Death. The action pretty much keeps moving, with Nick not slowing down the proceedings with his incessant asides like he did in those other two books. But then we do get a fair bit of jungle travelogue in the novel, which gives The Cobra Kill more the vibe of something like Joaquin Hawks.
Before I get into it though I wanted to note some things I’ve belatedly noticed about Stokes’s take on Nick. For one, Stokes doesn’t refer to Nick’s customary trio of weapons by their goofy nicknames: Wilhelmina the Luger is just “the Luger,” Hugo the stiletto is just “the stiletto,” and Pierre the gas bomb…actually the gas bomb isn’t even mentioned in The Cobra Kill. I can’t recall if Stokes used the weapons nicknames in the third-person Killmaster novels he wrote. Another thing is that Stokes’s take on Nick is that he’s purely an assassin; Stokes takes the “Killmaster” title literally, in that Nick Carter is only ever sent out on assignments that require someone to be killed. So this is sort of like the 007 setup of James Bond, but whereas “007” just means Bond has the approval to kill, Nick Carter is straight-up an assassin…something Manning Lee Stokes makes quite clear in The Cobra Kill.
In fact Nick is certain that the fact he’s a professional assassin scares a particular AXE contact this time out. As mentioned though when we meet Nick he’s on vacation in Hong Kong, but it’s as if we’ve missed another story entirely, as we’re informed that within the past few hours Nick has run afoul of Tongs, Commies, and the cops, and he’s hiding in a US embassy…just as a call comes in from his boss David Hawk. Nick is to leave Hong Kong and proceed to Indonesia, where he’ll eventually go to Malaysia; the Malaysian government has worked out a secret deal with AXE for Nick, top AXE Killmaster, to kill commie rabble-rouser Lim Yang, aka The Red Cobra. This Mao-type leader has put together a guerrilla army of red insurgents in the Malaysian government, and since the government has never acknowledged him, they want him quietly killed by an outside party. It’s a bit of a belabored setup, but it’s Nick’s job, so he’s on the case – again, he is a professional assassin, and his job isn’t saving the world, it’s killing a communist leader. (I wonder if Nick has a celll phone number where I can reach him?)
Seriously though, the anti-communist invective is strong throughout The Cobra Kill; Nick even notes in reluctant admiration how the Red Cobra has gone after college kids in Malaysia, knowing they’d be susceptible to his message, given how they’d want to go against their parents. But Nick, AXE, the Malaysian government, and practically everyone else realizes that communism is a bad idea, so there are no niceties in play; the job calls for the Red Cobra’s death, which would kill off the movement. Nick pays an expat – a former newsman who killed his wife and moved to Hong Kong, we’re informed randomly enough – to safely get out of Hong Kong. Once Nick’s in Indonesia the plot kicks in…the major portion of The Cobra Kill is Nick trying to find the Red Cobra, and most of it takes place in the jungles of Malaysia. The short sequence in Indonesia is pretty much the only part of the novel where Nick’s in civizliation.
Nick, posing as a boisterous vacationer in a plush hotel, gets a gander at his AXE contact…who of course is a hotstuff babe. Indeed, a sultry “Malay-Chinese” who really turns on the Killmaster. Nick delivers a paean to this girl’s legs that I just had to share: 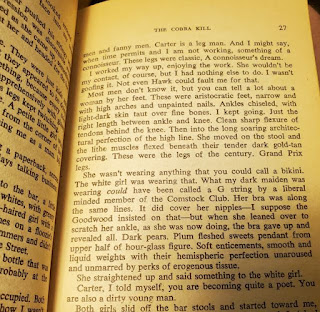 Which book does Nick obsess over screwing a corpse? I would like to read that ;)