Butler #5: Love Me To Death 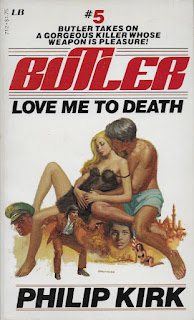 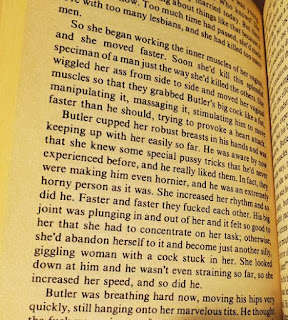 The action moves to Morocco, where Wilma has learned the woman behind all this is currently located: Kyra Deeb, an Iranian who runs a whorehouse and, given her hatred of men, trains a select group of beautiful women in the “ancient occult sexual techniques.” This part is like a sleazy sci-fi yarn as Kyra has Wilma screw a male dummy that’s hooked up to a scoreboard: 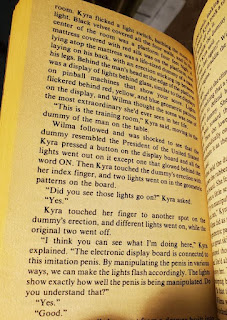 Meanwhile Butler is engaged in a 23-page sequence that doesn’t have much at all to do with the rest of the novel, and seems to be there to help meet the excessive word count Belmont apparently demanded (the book, like the others in the series, comes in at 224 pages). Basically Butler grills an Arabic guy about the “barbarous” ways of the Middle East (again, impossible to see a Leftist attempting anything like this today) and finds himself challenged to a duel. Meanwhile Butler’s befriended an old Legionaire named Pierre, the character Len mentioned when I recently spoke to him. Despite having not much to do with the plot per se, this sequence is still pretty fun and has a nice recurring joke of how no one thinks Butler will survive the duel – the taxi driver even asks for the return fare ahead of time.
Len does find a nice way to tie the unrelated plot into the main plot; a victorious Butler is pressured into going to the best whorehouse in town to celebrate, and of course it’s the one Kyra Deeb runs. An undercover Wilma is under suspicion due to all her questions, and to prove herself she’s forced to pose as a prostitute in Kyra’s whorehouse and screw the first man she sees. The reader can see exactly where this is going – and of course it’s none other than Butler himself. Their ensuing boff runs nearly as long as the one in the second volume, and is just as explicit: 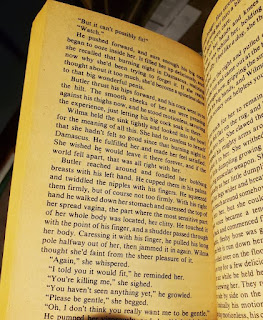 You’ll note I haven’t mentioned much action; again, the cover art for Butler is very misleading. Len does deliver an action-packed finale, though, with Butler and Pierre leading the charge into Kyra’s headquarters and Wilma zapping people with her special CIA pen-laser. There isn’t much gore at all, and humorously the book is pretty tame in the violence department…humorous when compared to the explicit sexual material, I mean. Curiously no mention is made that Wilma has been trained in those occult sexual techniques – one would think Butler would be chomping at the bit to try them out. However by novel’s end Wilma has returned to her frosty exterior, and she and Butler are again enemies…with the vow from Frank Sullivan that the two of them will never be teamed up again.
And that’s correct, both Butler and Wilma are still CIA agents by the end of Love Me To Death, with the implication that they will be reporting to Frank Sullivan – and not Mr. Sheffield of Bancroft – in the next volume, Killer Satellites. I’m curious why Len made this change to the series setup. But as mentioned he only wrote one more volume, so maybe he really was getting a little bored with Butler and just wanted to try something different. If so, that’s not apparent in the novel itself; Love Me To Death is a lot of fun, and Len is fully invested in the tale. And once again he channels his own personality through Butler, making for an always-entertaining read, with Len’s usual gift for entertaining dialog on full display throughout.
Posted by Joe Kenney at 6:30 AM

I wrote this novel a long time ago and don't remember it very well. However I do remember that I wanted to write a totally crazy novel but don't recall many of the details. The "reset" mentioned by Joe probably was my attempt to do something different with Butler, because I don't like to repeat myself. Whenever I felt myself getting bored with a novel, I steered it into an entirely new direction. Joe's insights into this novel are amazing. I've said it before and I'll say it again now: I think he understands my novels better than I do.

I haven't read any of the Butlers, but this sounds very James Bond-esque. The idea of the hero being able to turn a lesbian sounds like Bond's relationship with Pussy Galore in Goldfinger, while the whole plot of women 'fucking men to death' sounds a lot like Xenia Onatopp in Goldeneye....

LEN - You're an absolute genius, a true legend in the pantheon of men's paperback writers. I've read so many of your books and love them all. BUTLER is a particular favorite of mine as I love how you took the typical virile, handsome, macho spy and also made him a funny self-absorbed, sex-crazed goofball.

For those who are unfamiliar with how HILARIOUS Butler is, below is the pool scene from Slayboys (courtesy of Spy Guys and Gals):

EXAMPLE: From Slayboys, a bit of dialogue between a woman sitting beside a pool at a resort and Butler, who had never met the woman before, seeing if he might sit next to her:

Woman: ...'The chairs here are for all the guests. If you want to sit down, sit down.'

'Thanks for the invitation,' Butler replied.

'Invitation?' she asked. 'It was no invitation.'

'What if I got on top of you right now?'

'What was that?... Are you crazy or something?'

'No, I'm only trying to establish that you do give a damn where I go.'

MY KIND OF HUMOR FOR SURE! If it's your style of humor, too, the Butler books are pure gold.

JOE - Surprisingly, some of the non-Len Butler books (#7-12) do maintain the very goofy, fun charm of Len's first six books. Though, yes, it's shocking that they were written without Len's involvement or even knowledge. Crazy.

Wish these novels were available at eBooks!