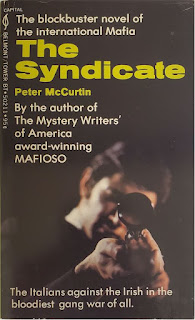 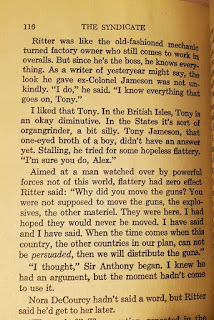 Even the finale is underwhelming. Rather than a slam-bang ending with Magellan as a one-man army against Ritter’s thugs, it continues on the hardboiled angle, with Magellan cagily playing factions against one another. But by “factions” I mean just those same three characters: Sir Anthony, Doolin, and Nora. We only get a quick glimpse of Ritter’s army in the harried finale, and as for the fulfillment of Magellan’s mission it’s only relayed in the very final sentences of the book. It’s as if McCurtin hit his word count and said that’s that. I get the impression that he too was unsatisfied with The Syndicate, hence he salvaged the one memorable thing about it for a future series: the name “Philip Magellan.”
Posted by Joe Kenney at 6:30 AM

I've been enjoying your blog. But I've been wondering why you haven't reviewed Judith Krantz's Scruples. It was a '70s 'bonkbuster' and I figured it would be right up your alley when it comes to trash fiction.

Hi DrYogami, thanks for the comment! I haven't read Scruples yet but I intend to someday. In fact I need to read more bonbukster-type books, as I haven't reviewed any on here in a while. I see that Martin over at Sleaze Factor has done a few posts on Scruples, though!