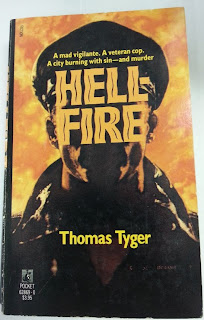 For some reason, this is one obscure book – I never would’ve discovered it if I hadn’t spotted it on the “Mystery/Suspense” paperback shelf in the Librairie Book Shop during a recent trip to the French Quarter of New Orleans. Thomas Tyger’s 1987 novel Hellfire is so unknown that Amazon doesn’t even have it listed under the correct author name, let alone a scan of the cover. I love the internet because I’ve discovered tons of books through searching on it, but here is a case where you would never just stumble upon the book after some online browsing; further proof that the occasional visit to a used bookstore will still yield rewards.

And this novel is totally trash! Hellfire is about a psycho who is bombing sex clubs in New York City during one very hot summer, but this plot is just a framework for Thomas Tyger (whoever he was) to serve up a host of fringe-society characters, each of whom regale us with endless stories about their sordid, twisted, and kinky sex lives. The “hero” of the tale is Detective Nick O’Shay, a movie star-looking NYC cop who is actually referred to as “the real-life Dirty Harry” by the press, but O’Shay is such a cipher (not to mention such an ineffectual protagonist, more of which later) that the villain of the novel, Daniel Glass, actually comes off as more memorable.

Glass was a POW in ‘Nam after his fighter jet was shot down. Tortured and abused, he returned to America a shattered man, his wife having left him. Now a drunk living on his pension, he has taken it upon himself to clean up the filth that has swept over America. Living in upstate New York he makes raids upon Manhattan and environs, wearing a Lone Ranger costume and sending the newspapers daunting letters signed “The Masked Man.” The novel opens with Glass’s firebombing of a sex club in Manhattan; our “hero” O’Shay is called in to helm up a team to bring in the Masked Man.

My friends, you will seldom meet as ineffectual a protagonist as Nick O’Shay. He does nothing in the course of this long novel, other than put together a big team, get occasional updates from them, and sit around and drink his Glenfiddich whiskey. Oh, and boff his bimbo girlfriend Maggie, who we learn late in the tale was once busted for hooking. (The gal by the way also snorts coke and smokes dope, all while O’Shay sits beside her, sipping his whiskey!) O’Shay is so famous that women hit on him in bars and the newspapers are always hounding him for a story, but the guy does so little you figure he has to be a spoof on the author’s part, a mocking satire of the “tough cop” of pulp fiction.

But in the course of his half-assed “investigation” O’Shay meets a variety of freaks and sadists, many of whom he knows from his past life in Vice. Here Thomas Tyger comes to life; each and every one of these minor characters spins endless stories about the sexual underworld. I’m telling you, there is some sick and twisted and kinky stuff in this book – though, strangely, not a single sex scene! We get a lot of talk about it, a lot of detail about bizarre sexual practices, but never once do we get a passage where any of the characters will do the actual deed…other, that is, than a scene where Glass visits a high-class brothel in Manhattan and briefly falls in love with one of the whores after she blows him. (He of course later bombs the place when he returns and finds out the girl is with “another client.”)

These fringe characters sparkle with life, but they are presented as so twisted and so focused on sex and sex alone that it seems obvious that Tyger sides moreso with Glass, the “villain” of the tale. Confronted with such rampant sleaze and sin, such overwhelming inhummanity, it’s no wonder he lashes out; though to be sure he lashes out in monstrous ways. Bombing, shooting (with silver-tipped bullets), even strangling the various members of the sexual underworld, Glass is the only character in the novel who makes the narrative move, the only one who doesn’t sit around and spin endless stories. Meanwhile O’Shay sips more Glenfiddich and shows up to look over the ensuing crime scenes.

There are only a few “action” scenes per se, the majority of them from Glass’s viewpoint as he guns down defenseless whores or bystanders. We see him carry out a few of his objectives, planting bombs, murdering a Larry Flynt-type, putting on his Lone Ranger costume and driving into the drug-dealing area of Times Square and blowing away people in a bar. One issue though is that the people harmed are presented as so thoroughly despicable that you feel little sympathy.

For example there’s Natalia Stein, a heavyset and lesbian reporter who inadvertently brought down Glass’s wrath with her sex club expose that was printed in the New York Times. Stein, a thankfully minor character, is presented as such a loathsome individual that when, toward the very end of the novel, she is partly disfigured by a package bomb Glass mails her, you still can’t stand her, as she’s right back into talking about how much money she’ll make from her upcoming “Masked Man” book while she bitches at her female assistant/lover, Jan. (That being said, Stein does here have one of the best lines of the novel: “Who do you think you are, Jan? I’m Natalie Stein! You’re nobody! You’re a glamorized go-fer and a mediocre cunt-lapper – and that’s all you’ll ever be!”)

O’Shay finally does something, at the very end of the novel…that is, after Maggie has been kidnapped by Glass. And even here O’Shay only acts due to someone else’s help – namely Hotdog, an overeager member of Glass’s squad (Hotdog was kicked off the force due to his arresting of countless people due to minor infractions, only reinstated thanks to O’Shay), who follows up a lead on a mutilated whore, discovering that the she-male was attacked by a man matching Glass’s description in upstate New York. Within moments they have Glass’s name and address, and O’Shay busts ass up there alone, to save Maggie and to cancel Glass’s ticket.

The finale is pure Hollywood action movie as Glass, busy torturing a nude and bound Maggie, catches sight of O’Shay just as he is sneaking on Glass’s property to launch his ambush. This leads to a shootout and a chase scene that goes all the way back to Times Square, ending with a climatic self-immolation. While it’s a great sequence, it comes off as strange given the disparity with what came before – honestly, there is barely any action in the novel, it’s all just a sequence of one-off characters relating explicit details about their sordid sex lives, plus O’Shay is such a loser that you have a hard time buying his last-second superhero makeover.

My guess is that Thomas Tyger was a pseudonym, but I have no idea. There’s zero info on the author or the book online; Hellfire appears to have made less than a ripple in the publishing world. Tyger, despite his despicable characters and boring protagonist, is actually a good writer, doling out funny dialog. He also has a definite gift for storytelling, of the tall tale variety; every character has at least two or three stories to tell, and each story is so packed with detail that you figure Tyger must’ve been a cop himself, or at least did a hell of a lot of research. The members of O’Shay’s force also sparkle with more interest and life than Shay himself, and Tyger ably captures the locker room chatter of veteran cops as they take delight in ribbing one another.

It wasn’t the greatest novel I’ve read, but Hellfire was for sure an awesome discovery (one of the few bright points of that New Orleans “vacation,” during which my wife contracted food poisoning from the awful, awful Mother’s Restaurant). But anyway the novel is very lurid and sleazy and exploitative; within the first handful of pages Tyger has already doled out a barrage of sensationalistic stuff, letting you know exactly the kind of ride you’re in for.
Posted by Joe Kenney at 6:30 AM

I certainly agree with you about the tattoo craze, though with a lot of exceptions. Coincidentally, just ten days ago I saw a woman with a lot of them, and they looked perfectly EXOTIC on HER. So it goes both ways.

He got it right! Tattooing was not legalized in NYC until 1997. It is still illegal for minors.

Wow. I read this one over twenty years ago and couldn't believe how sleazy it was. My guess is the author subscribed to a number of SexZines available at the time and was reciting things he had read about.

Upon reading the first few sentences of your write up of this book I knew I had to have it. I found it very entertaining although I found the end to be very much out of place. I come to your site constantly now for reading suggestions. Love what you are doing keep at it!

Everyone, thanks a lot for the comments. Griffin, yours made me laugh out loud. Jaho, glad you located the book and enjoyed it. Also, to clarify on my tattoo comments -- sure, I think one or two of them are fine. But it seems to me that the current trend is to look like escapees from a circus sideshow.

Joe, this sounds great. Can you tell me how Amazon has the book listed if it doesn't use the author's name correctly? I'd like to try and get a copy.

Lucas -- I should have included that info in my review! Amazon has the author for Hellfire listed as "Gatewood," with no first name.

got the book myself and really enjoyed reading it....anymore of the same author ?..long time ago 1987