The Marksman #6: Death To The Mafia 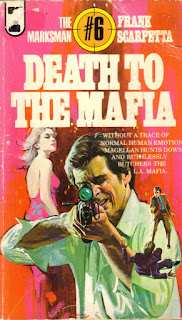 The Marksman #6: Death To The Mafia, by Frank Scarpetta
November, 1973  Belmont-Tower Books

This volume of The Marksman was clearly written by series creator and editor Peter McCurtin, and amid all the sleaze and violence we have, believe it or not, some actual characterization for “hero” Philip Magellan, complete with background information, something we’ve never rececived in any preceding Marksman novel. Unfortunately, the background information is for an entirely different character! But more on that later…

First we get a one-page “prologue” that informs us that Terri White, of the previous volume, is now hiding out in Florida, Magellan having gotten rid of her because she was becoming a nuissance due to her “loving him and all that.” Terri White was of course a creation of series co-writer Russell Smith, and McCurtin has no intention of making the Marksman into a continuity-heavy series. His intent is to provide one thrill after another as Magellan “kills in cold hate.”

In fact McCurtin isn’t even concerned with continuity in his own tale; Death To The Mafia opens with Magellan driving away from Dallas, where he apparently killed a few mobsters but was then ratted out by a girl he picked up in a nightclub. Now in the desert Magellan is ambushed by an army of mafia “soldiers,” tipped off by the mobsters back in Dallas. Little concern, though, as Magellan hastily dispatches them with his handy grenade launcher – though McCurtin provides plenty of battles in this novel, none of them have much spark because Magellan’s so superhuman.

Even though he’s in the middle of the desert, in a shootout no less, Magellan still meets a pretty girl – a redhead who has just left her husband. She happens to drive by during the shootout, and after her car is destroyed Magellan feels obligated to carry her along to her destination of Lubbock. But the mobsters are chasing them, and McCurtin delivers a nice scene where Magellan and the girl go into Carlsbad Caverns and Magellan takes the thugs out in the pitch-black caves, using his night vision goggles. (Magellan also causes the death of several tourists when he shoots out the lights in the caves, and people get trampled in the mass panic, but McCurtin just brushes this off!)

The novel proceeds in episodic fashion. Honestly, I had a hard time retaining half of what I read, as this book was the very definition of disposable literature. After dropping off the redhead Magellan heads for LA, where he discovers that Anselmo, the brother of the man who ordered Magellan’s family killed, is now residing. Another quick and unsatisfactory battle ensues (though one packed with gore), after which Magellan blithely continues on his way into Los Angeles, where for reasons apparently important (to him alone) he simply must create a cover story for himself as a black man!

Yes, in a move reminiscent of Mark Hardin, Magellan sprays his skin black. And we’re reminded that, having grown up in New Orleans, Magellan knows how to “talk black.” This entire sequence has no bearing on anything, but then McCurtin fills pages throughout. For example, several times in the narrative Magellan will flip through his mental notebook of the mobsters he’s currently after, and we’ll get several pages of inconsequential background data on each; how they got into crime, how they made their fortunes, etc.

McCurtin also doles out plentiful amounts of sleaze. I figured he would be more restrained than Russell Smith, but he’s about on the same level! Like for example a very long but of course unnecessary scene where Magellan scopes out his first LA target, Anselmo, at a dive where women put on erotic shows for the delight of the crowd, after which they are bid on for a night’s service. McCurtin packs on some sleazy stuff here, breaking out words and phrases I’ve never once encountered in thirty-plus years of reading, like “V-tuft” to describe the women’s pubic hair, and, brace yourself, “cuntal juices.” Good grief! (It would make for a great band name, though -- V-Tuft & the CJs!)

But our series editor is about the same as Smith when it comes to action scenes, all of which lack any tension despite being generous on the graphic violence. Even the Anselmo hit is par for the course, despite the dude being related to the man who had Magellan’s family killed. Magellan will just mow thugs down with his guns in gory splendor, or he’ll blow them up, and there’s little retaliation on the part of the goons. After dealing with Anselmo the novel hurtles on, abruptly changing plots: Now Magellan is after “The Bump,” an elderly mafioso who lives in Howard Hughes-style seclusion. Magellan sets himself up as a visiting mob torpedo, and somehow manages to pick up another girl, one named Mignon.

Throughout McCurtin will drop occasional flashbacks to Magellan’s previous life. This is a rarity in the series. We learn that Magellan has basically done everything ever known to man. From demolition stunt driving to climbing sheer walls with nothing but his hands and feet, Magellan has mastered it. This stuff is so egregious and shoehorned into the narrative to accommodate the plot that it becomes comical after a while. More importantly McCurtin writes a lot of material about Magellan’s family, how they were killed when Magellan refused to sell guns to a powerful mobster, and how Magellan “got revenge” on them in New Orleans.

The only problem is, this New Orleans vengeance tale has never been told in the Marksman. Nor have we ever heard the story behind the deaths of Magellan’s family. You see, all of the stuff McCurtin writes here is actually background material for another McCurtin series and creation: The Assassin, a three-volume Dell series from 1973 relating the first-person adventures of a New Orleans native named Robert Briganti whose family was murdered when he refused to supply a mobster with guns.

Len Levinson once told me that The Sharpshooter was “based on the Marksman series, which was based on the Assassin series.” So I guess The Assassin is the ur-text so far as the Marksman and Sharpshooter series go. Either McCurtin just confused his own characters or figured to hell with it, and guessed no one would notice. Or maybe there’s another reason…

Makes as much sense as anything else. Yeah, this book is bad, but at least it's bizarre bad, which is...well, not good, but better than bad. (?)

I don't remember if McCurtin accidentally wrote the name "Rock" in this one.

The more I read about these other men's action books, the more I'm glad I stuck only with The Executioner back in the day!

I believe Magellan goes into his family's murder in the final book, The Reckoning.