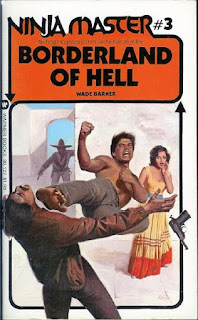 This third volume of the Ninja Master series comes off more like a sequel to the first volume than the previous one did, with hero Brett Wallace still getting his start as a mob-busting ninja, whereas in the previous novel he was already a one-man army. But then, that superior volume was courtesy Ric Meyers, and this one was written by some unknown author; it certainly doesn’t appear to be the same person who wrote #1: Vengeance Is His, as this writer is sure to keep the acton moving and definitely has a knack for delivering some full-bore sleaze and sadism.

In fact the author displays this posthaste, introducing us to Meiko, a pretty young Japanese-American stewardess who has been kidnapped by the depraved General Estrada and is now imprisoned in his barracks-style villa in Mexico. The opening chapter is particularly unsettling as Meiko is summarily humiliated in front of Estrada’s guests (including having her pubic hair shaved off), forced to go around to each man so he can feel her up, after which they take turns raping her!

Brett Wallace comes into it because Meiko is a friend of a friend…Rhea, the lady who runs the restaurant Brett owns, is friends with one of Meiko’s co-stewardesses. When the stewardess claims that Meiko has been missing for a month, she goes to Rhea for help, having heard about her American Ninja friend. (The airline meanwhile chalks it all off, figuring Meiko just ran off with one of the stewards!) Brett here is not the inhuman cipher of Meyers’s previous volume; he still enjoys the finer things in life, including a bit of goodbye casual sex with Rhea before heading out on the job. (The author by the way leaves the actual sex scenes vague for the most part, but he’s all over the buildup and lurid quotient.)

Borderland Of Hell is also more slow-going than the previous book (though not the tepid crawl that was volume #1). For the first half of the book Brett is in investigator mode, going around and talking to Meiko’s friends before heading to Mexico…where he proceeds to continue poking his nose around. He brings along Jeff, Brett’s young student who came into the fold in the first volume (before being pretty much ignored in the second one). The two have a bit of banter going on, with Jeff serving up the laughs as he hits on various women and Brett playing the straight man.

Occasionally the pair get in scuffles, and the author, like the nameless writer of the first volume, treats ninjutsu basically like karate; Brett will pull off fancy moves to take down his opponents, and seems very excited about using common everyday objects as weapons, such as a pair of shoelaces. But there are no ninja weapons or ninja costumes as in the previous book.

The author also fills up more pages with arbitrary flashbacks to Brett’s training back in Japan, where his sensei doles out the expected “wise man” philosophy. In between the investigation pieces and quick action scenes, the author will flash over to Meiko, serving up more lurid stuff as she’s further raped and degraded -- including an XXX-rated bit where she's forced into a lesbian act with a fellow kidnapee as Estrada and his men watch.

But as usual with these books that are overly padded, Borderland Of Hell delivers an anticlimatic finale. It all seems to be building up to something; Brett and Jeff discover that Estrada has an army of fifty goons, and that others have tried to break in and save his imprisoned women but all have failed. In fact Brett is overly concerned and fears he and Jeff might die – another big difference from the previous volume, where Brett had no fear (or hardly any other emotions). And meanwhile Meiko proves to be a stronger character than you’d think, planning her own escape, even if it means certain death if she’s captured again.

However when it all goes down, the author handles the climax in just a few unsatisfying pages. The goons, so built up as heavy oppostion, are perfunctorily dealt with by Brett and Jeff – the former once again using his damn shoelace! Forget about the weapons-and-ninja-armor kickass finale of the previous book. And on that same note, Brett here clearly needs assistance from Jeff, though the younger man isn’t anywhere near the fighter Brett is. Yet for all that, the way the author handles this finale you get the idea Brett didn’t need much help, after all. Even Estrada’s comeuppance is a let-down, Brett merely kicking him into a spear.

The author isn’t that bad, all told, and actually reminds me very much of Len Levinson. This person has the same handle on character, and also provides the same sort of goofy humor as well as some blood, guts, and sleaze. It appears that this person also wrote two more volumes of the Ninja Master series (volumes #5 and #7), trading off with Ric Meyers (who wrote volumes #2, 4, 6, and 8).
Posted by Joe Kenney at 6:30 AM