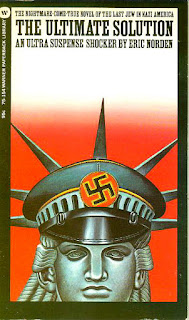 The Ultimate Solution, by Eric Norden
May, 1973  Warner Paperback Library

This slim paperback original imagines an alternate 1973 in which the Germans won WWII and now the entire Western world is under the control of the Nazis (the “Empire of Japan” rules the East). And yet for all of that The Ultimate Solution is really just a police procedural, narrated by New York cop Lt. Bill Hadler as he is tasked to hunt down an actual Jew – the only one left if the world.

Norden throws us right into this bizarre world and doles out background detail at his leisure; it isn’t until the very end that we even find out how exactly the Germans won. (Basically, the US stayed out of the confrontation until it was “too late,” by which point the Germans had the atom bomb, which they used on Europe and then a few US cities…including Pittsburgh! Why would anyone want to bomb Pittsburgh??) Instead Norden places us square in this alternate 1973, with Hadler’s narrative cynically detailing the strange Nazi-run world as if there’s nothing unusual about it…which obviously there isn’t, so far as he’s concerned.

What most impressed me is how economically Norden tells his tale, not to mention bringing to life a whole alternate world – the novel runs a brisk 142 pages. Despite the short length we get a fast-moving plot, good characterization and dialog, and some well-rendered action scenes. The novel’s actually a great teacher on how to keep a story moving while still doling out a modicum of background and information; never once does Norden resort to exposition or info-dumping. As I say, he treats the tale as if it’s just a regular cop story; while Hadler might have a few issues with the society in which he lives, never once does he question anything about it. He’s just a cop doing a dirty job.

The job’s actually more than dirty – Hadler gradually realizes that it’s a no-win situation. Called in by the Gestapo (aka the “Feds” – the FBI of Hadler’s world), Hadler reconnects with a Gestapo colleague he worked with in the past. A German VIP is on his way to New York, and he’s contacted the Gestapo to find a good New York cop to handle a highly secretive and important case. The VIP is Von Kleef, an old man who started with Hitler in the earliest days, and thus is now at the very pinnacle of the Nazi world; Norden presents a very interesting picture of how Hitler’s henchmen would’ve profited had the Nazis won the war.

Von Kleef personally oversaw the extermination of all the Jews, and takes it very personally that one of them might still be alive. It turns out that a few weeks ago someone robbed an antiques store in New York, the culprit being an old man who freaked out at the display of Jewish skulls on display – “nothing pieces,” we’re told, so ubiquitous as to have no value, usually used as ash trays. The man left behind a telltale piece that Von Kleef is certain could only belong to a Jew – a mezzuzah. Von Kleef wants this old man tracked down, and he wants to keep it secret; Germany is closing in on war with the Japanese Empire, and the “ContraAxists” who are pro-war don’t want it leaked out that a Jew might’ve escaped the Nazi “final solution,” as it could be used as propaganda against them.

Hadler isn’t thrilled to take the case, but he has no choice. He works it with Ed Kohler, the aforementioned Gestapo agent Hadler worked with in the past. Together they scour this bizarre and sadistic NYC as they track down clues. Here Norden doles out more of his background detail, and we see that this alternate world is incredibly grim. Blacks have their tongues excised at birth and are raised to become “bucks” that fight like ancient gladiators, millions of people watching and betting as they fight to the death. Slavs too have their tongues removed and are now imported as either sex-slaves or as the chained victims of torture clubs. There are even whorehouses staffed solely by children.

Norden gives more background on this “ultimate solution” as Hadler and Kohler visit a concentration camp outside New York, where the thorough destruction of all American Jews was carried out years before. The pointedly-ironic element here is the camp commandant, who comes off like your average all-American, square-jawed and buzzcutted military type, who happily regales Hadler and Kohler with tales of the major Jewish purge he helmed a few decades ago. We also learn that this concentration camp is now an amusement park, and also that “these kids today” are disinterested in the history of the camp and could care less.

The book works mostly as a police procedural/mystery, but Norden provides a few action scenes. In one of them we learn that Hadler packs a Schmeisser, which apparently is police standard in this alternate world; he uses it on a homeless man who attacks him with karate. But the bum is wearing a Mission: Impossible-style mask, beneath which Hadler discovers the face of a Japanese man. Here Norden works in some conspiracy angles as it turns out the Japanese also know about “the Jew” and thus are trying to not only capture him for their own propaganda purposes, but are also trying to take out anyone else who is searching for him.

There’s very little about the novel that is sci-fi, until toward the very end, when Norden introduces the idea that the Jew is actually from a different world: ours. This element isn’t fully elaborated, but when we finally meet the Jew he claims that he “died” on our world and woke up to find himself in this alternate reality. One of the characters, who happens to be sheltering the Jew, believes that the man has been sent here as a harbinger of a better world, that the universe sometimes makes “mistakes” and attempts to rectify them, this Nazi-ruled world being one of those mistakes. (Sometimes I feel the same way about our own world, though.) This sci-fi stuff appears to be leading to a sci-fi ending, but Norden retain his tone and delivers a climax more grounded in the grim world he has created.

My main problem with The Ultimate Solution is that this alternate world is just too evil, almost comic bookishly so. I had a hard time believing that the entirety of the world could so easily give over to such brutal and sadistic leanings, especially within just one generation. (But then, a generation ago who would guess that within 30 or so years people would avidly take photos of their meals and other mundane aspects of their life and then upload them to the internet for others to comment on and “like?”) Still though, live torture acts on tongueless Slavs? Whorehouses comprised solely of children? Even pet hamsters which are specifically sold so as to be tortured and crucified? It’s just all too much.

And some of the stuff doesn’t even fit into what I know about Nazism…for example, Hadler states that homosexuality is preferred and heterosex is “frowned upon” by the elite, with male/female relationships only condoned for breeding purposes. But weren’t the SA drummed out of the Nazi party over allegations that they were made up of gays? Sure it was just slander, but the very fact that it was used as slander would indicate that homosexuality was not openly viewed as acceptable…and that is the issue here. All “evil” things are openly acknowledged by the ruling Nazis in Norden’s world, whereas to me it would seem more realistic that they would retain their “clean cut” image and do all the dirty stuff behind the scenes.

I read somewhere that Eric Norden was the pseudonym of Eric Pelletier, and that he was born in 1899 and died in 1979. I'm not sure if this is accurate. I have the June 1969 issue of Playboy, which features an article by Norden ("The Paramilitary Right"); the issue has a photo of him on the contributors page, and Norden looks like a young man in it, not a 70 year-old. (The brief author bio states that Norden is a "free-lance writer who is currently in London researching a novel.") After a handful of short stories in the early ‘70s he published The Ultimate Solution in 1973; it was his only novel. In 1978 he published Starsongs and Unicorns: Journeys Through Time and Space, a Manor paperback original which collected his sci-fi short story work. I've read a few of the stories and they're all good, if not as memorable as this novel. After this it appears Norden dropped off the map, though of course it's possible he passed away in 1979.

Also I need to mention that this novel is exceedingly rare, not to mention overpriced. But guess what, I got my copy via InterLibrary Loan. And the unknown librarian at the lending library (The University of Texas) is to be commended – the person actually bound a hardcover overtop the original book, thus perfectly preserving the front and back covers of the old paperback.
Posted by Joe Kenney at 6:30 AM

I remember reading an ad for this in the early 70's and thinking "WTF?".

Ever check out Norman Spinrad's The Iron Dream?

Thanks guys for the comments. Horrox, I read The Iron Dream a couple years ago and enjoyed it, but felt that the joke was worn a little thin after a while...the book just sort of kept going on. Great concept, though!

The review was done a while ago so don't know how many will see this. The world of 'The Ultimate Solution' sounds like that in Philip K. Dick's classic 'The Man in the High Castle,' even to the visitor from our dimension.

Ernst Rohm, the head of the SA, was a notorious homosexual and apparently there was a lot of homosexual activity around him, tho I don't think it was general in the SA.

Rohm and the SA were purged during the Night of the Long Knives in 1934, mostly as a sop to the German military. The SA lasted until the end of Nazi Germany in 1945. But after the purge, they were supplanted as the main Nazi Party security apparatus by the SS.

Great summary and analysis of an old and obscure book! Touching on its rarity and expensive value, would it be considered worth buying at a price below $50?

Does anyone know who the illustrator is for the cover of The Ultimate Solution? Thanks in advance!
Wayneradz@gmail.com

You can read this online: https://archive.org/details/NordenUltimateSolution
And that shows cover by "Seymour Chwast"