Killinger #1: The Turquoise/Yellow Case (aka Killinger) 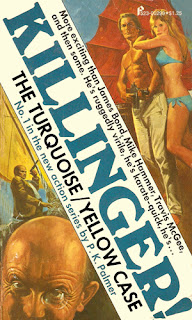 I’ve wanted to read this book for a few years, but I’ve just been too lazy to order a copy online. But then I was lucky enough to come across a copy at Beckham’s Bookshop in the French Quarter during a recent trip to New Orleans. I should’ve gotten the book sooner, though, as The Turquoise/Yellow Case is a lot of fun, pretty much brimming with that “super ‘70s” style I so enjoy.

James Bond, Mike Hammer, and Travis McGee are all referenced on the cover, but the first two are decoys: this series is clearly “inspired” by the latter, with hero Jedediah Killinger the Third basically Pinnacle’s response to John D. MacDonald’s Travis McGee. And I suspect that Pinnacle must’ve been on to something, as The Turquoise/Yellow Case was actually reprinted in 1980 (titled just Killinger), so it must’ve sold pretty well. Unfortunately though there were only two books in the series, no doubt due to author P.K. Palmer’s death – the book is copyright “The Estate of P.K. Palmer.”

At 262 pages of small print, the book is meatier than the average Pinnacle offering. Reading it, a few things become clear about P.K. Palmer. For one, he’s enamored with his characters, every single one of them. For another, he tends to repeat himself. Many, many times. Third, he is in absolutely no hurry to tell his tale. And finally, he is also enamored with his own writing style. And yet for all of that – despite the listless plot, the rampant scenes of redundancy, even the fact that the book has barely any sex, violence, or thrills – I still found The Turquoise/Yellow Case to be pretty compelling. At the very least, it kept me reading, and prompted me to track down the second volume.

Part of my enjoyment no doubt comes from that aforementioned ‘70s style. Killinger, actually described as “ruggedly virile” on the cover, encapsulates the 1970s male ethic: Though 41 he’s got the physique of a “28 year-old athlete,” he runs two miles every day (followed by weight training and a few hours of karate practice), he lives on a Chinese junk that has all the comforts of a swank bachelor pad, he is devoted to the finer things in life, and as you’d expect he’s very popular with the ladies. However we see right out of the gate that we’re in for a different sort of trip here: Killinger isn’t a revenge-seeking ‘Nam vet, a mob-buster, or even just a weekend adventurer or any other sort of thing you’d expect in a men’s adventure novel. The dude’s a “marine insurance adjustor.” Seriously, that’s all he is!

Killinger makes his (apparently good) living covering maritime insurance cases. Presently he’s living off the coast of Santa Barbara, California, where the entirety of The Turquoise/Yellow Case takes place. His current case involves Ejnar Mylius, a mega-wealthy Danish entrepreneur who crashes his yacht outside Santa Barbara during a storm. Mylius is knocked into a coma as a result of the crash, but the only other passenger on the ship, his beautiful granddaughter Katja, is unharmed. Killinger is called in by his firm to handle the case.

Meanwhile, two characters who seem to have walked out of James Clavell’s Noble House converge upon the scene like vultures: Count Risponyi, a simian-like scoundrel of evaporating wealth, and Kuan Yang Smith, aka K.Y. Smith, an Australian-Chinese of massive wealth, wealth which he’s gained through piracy. Both men want the contents of a heavy crate on Mylius’s ship, and they spend the majority of the novel plotting against one another to acquire it. Killinger is caught in the middle, and it takes him practically forever to work against these guys.

Of the two villains Palmer spends the most time with K.Y. Smith, who actually provides the title…which proves to be pretty un-PC: Palmer often mentions Smith’s “turquoise” eyes and “yellow” skin. Indeed Palmer describes his characters over and over again, and is also fond of repeating the same sequence from multiple viewpoints, no matter how minor the events transpiring. Palmer also drills into us how inhuman Smith is, constantly referring to his brain as a “computer” as it spits out facts and figures and blueprints for his latest plans and tactics. But more importantly, K.Y. Smith has a jawdropping daughter named Talya whom Smith has raised to basically be an extension of himself; he sends her out to “distract” men Smith wants distracted, and thus he sets Talya upon Killinger.

I expected that Katja was going to be the female star of the book, but for the most part she doesn’t even appear in the narrative, instead by her grandfather’s side in the hospital. Talya takes center stage, and Palmer goes to town reminding us, often and in detail, how gorgeous she is and how great of a body she has. And yet for all that it’s with shock that I report that there isn’t a single sex scene in this novel until around page 170, and even when it happens it’s one of those “fade to black” deals. The same holds true for the three other sex scenes here; Palmer is all build-up, but prudishly cuts away when the wah-wah guitar kicks in.

The majority of The Turquoise/Yellow Case goes down like this: K.Y. Smith or Count Risponyi will hatch some scheme to acquire Mylius’s mysterious cargo, and they will send in their people or hire some locals to carry it out. Smith’s favored gambit is to send Talya to ensnare Killinger, which is something she’s happy to do. This entails many scenes of her appearing on the beach during Killinger’s morning run wearing a “shocking bikini,” racing him after some innuendo and then “frolicking” in the water with him. Yet despite all the buildup it still takes forever for the couple to act upon their mutual attraction.

Risponyi also distracts Killinger with a woman – in this case Elena, a “Peruvian pepper” of an actress who ends up serving as Killinger’s first conquest in the book. I have to say though that Killinger basically comes off like a dolt; anytime Talya or Elena come over, Killinger instantly deduces that they are there to distract him, but he basically just shrugs and decides to go along with it, even leaving his ship when he knows that Smith and Risponyi are out there waiting for a chance to sneak on board and steal the precious cargo. But then, given how Palmer describes the two women as so incredibly gorgeous and magnificently built, you can hardly blame the guy.

There are quite a few characters here, and Palmer does a good job juggling them all. Killinger’s (barely seen) sidekick is Kimo, a 20 year-old Japanese-American from the midwest who helps around on the junk and is learning karate from Killinger; there’s also Kimo’s girlfriend, Samantha. Then there’s Marjorie, a black lawyer who joins Killinger’s team in this initial volume, sent here to assist in his cases; Palmer develops a long-simmer relationship between the two, with an unfunny recurring joke where Killinger will ask the constantly-pouting Marjorie to say “prunes,” so that when her lips pucker he’ll slip in and give her a kiss. Oh yeah, and Killinger has a bunch of dogs and cats. There’s also Jao O’Reilly, Katja’s ex-husband, who arrives in Santa Barbara to capitalize on his wife’s sudden misfortune and ends up working for both K.Y. Smith and Risponyi.

It all goes on and on and on, Palmer elaborating every scene in his affected style. It isn’t until the very end that anything really comes to a broil; humorously enough, Killinger after going celibate throughout the novel has sex with both Elena and Talya on the same day, just a few hours apart from one another, and shortly thereafter both Smith and Risponyi initiate their individual plans for acquiring the cargo. This leads to the one action scene in the book, with Smith blasting everyone with a knock-out spray and Killinger breaking out some of his “karate-quick” moves. But again, despite the lack of forward momentum, I enjoyed the characters and Palmer’s leisurely style, so the book was a nice change of pace from the men’s adventure norm.

Anyway I think this series was an interesting idea – tapping into the success of the Travis McGee books, combining their “beach read” sensibilities with a men’s adventure novel flair. It’s too bad Palmer only got to write the two books. I wonder though if the Killinger series did well enough that other publishers took note; notice the similarities between the covers of the two Killinger novels and Leisure’s Shannon series. The cover designs and artwork are almost identical, and it even looks like the same artist was employed. And though the Shannon books are a bit more goofy, and more packed with sex and violence (but worse writing), they’re definitely along the same lines as Killinger.

A little research on P.K. Palmer shows that someone of the same name served as a writer and director for several TV shows in the 1950s and 1960s, among them Dick Tracy and Peter Gunn, so I suspect it was the same guy. It also appears that another Palmer book was published after his death: Dementia, which though credited to “Keith Parnell” is also copyright “The Estate of P.K. Parnell.” (I’ve had a copy of Dementia for a few years, and now I definitely want to read it.) It looks like Palmer only published these three books, and I can find no other info on the guy, though I’d suspect he must’ve died in 1973 or so, given the January 1974 publication date of The Turquoise/Yellow Case.
Posted by Joe Kenney at 6:30 AM

I've had both Killinger books for several years, but haven't read them. I read the Shannons back in '07, and wasn't thrilled with them.

Is there any way to get a big "spoiler" for this book? I'd like to find out what happens to the two girls.

That's partly because the "both girls in one day" idea reminds me irresistibly of Destroyer # 5, where the Remo character does the same with the two villainesses who are out to distract him - he "lets" them. I'm guessing this character isn't as ruthless with his two girls as Remo is with the twins later on in that book, but I was wondering.

Grant, you are correct, Killinger isn't ruthless in the least. In fact he's pretty much the opposite -- he barely does anything in the course of the novel. Anyway both women emerge unscathed -- Katja hooks up with Killinger after her father recuperates, and then heads back to Scandanavia with him. Then, in the very last page of the book, Talya returns after seeing her father off to Singapore, to stay with Killinger for a few weeks before heading off on her own life...she tells Killinger that he was the only man who could break her father's control over her, so now she's a new woman. So really, the novel is nothing like most other men's adventure novels! Thanks for the comment.

Thank you. Those spoilers can be very helpful.