The Sharpshooter #8: No Quarter Given 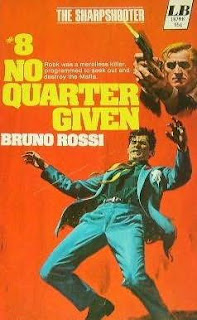 The Sharpshooter #8: No Quarter Given, by Bruno Rossi
July, 1974  Leisure Books

No Quarter Given plunges the Sharpshooter series right back to its grimy, nasty roots. Once again we have what might've been intended as an installment of the Marksman series, with “hero” Johnny Rock acting more like Philip Magellan as he kidnaps mafioso, tortures and mutilates them, and then murders them in cold blood – that is, when he’s not indulging in his penchant for disguises or taking some new weapon or knockout drug from his “artillery case.”

Lots of online searching has yielded zero information about who wrote this volume, but the style is close enough that it might be Russell Smith. Maybe without the nutzoid spark of Smith’s books, but with that same deadpan, grisly sense of humor, where things are plainly laid out in the narrative before jumping wildly to exclamatory sentences of death and destruction. There’s also a huge focus on maritime stuff, with portions of the book coming off like “US Navy 101,” and this is something else I’ve often noticed in Smith’s novels.

As expected, the book opens with absolutely no reference to the previous volume, which was courtesty Len Levinson. Rock is now in Norfolk, Virginia, on his way to DC to clear up the mob corruption there. (Also Rock is for the most part referred to as “Rock” throughout, with only one “Magellan” goof – but then, it’s actually a double goof, as the author writes “Magella.”) But as we open Rock is in a Norfolk bar watching a stripper named Mimi; the place serves as a cathouse, the women forced into prostitution, and Mimi pounces on Rock because she instantly figures out that he’s a good guy and can save her from this hell.

The place is overseen by mob boss Joey “Niente” Barbagallo, a prick who runs a veritable empire but poses as a bartender at a local watering hole. Niente was in the Navy for twenty years (cue lots of Navy material here) and has used his connections to set up a black market ring across this part of Virginia. He also sets up Navy VIPs and then exploits their families when the Navy dude’s life is wrecked, usually indenturing the daughters into forced prostitution, which happens to be Mimi’s sad story.

There’s barely any action for the most part, instead these rushed descriptions of Rock and Mimi shuttling from one place to another as they get a lockdown on Niente’s empire; this includes a bit where they pose as a Navy officer and his mistress, but they’re abducted by a trio of mobsters who themselves are posing, as reps for a swinger’s club. After blowing away the three gunmen, Rock and Mimi head on to the club anyway, and we’re vaguely informed of the debauchery within, of the live sex shows performed on stage, mostly by juveniles (the author must really have something for pushing this particular boundary), while the audience is given beds of their own to watch the stage shows, Rock and Mimi going at it on their matress.

The author really fills pages with long sequences from Barbagallo’s point of view, down to the most mundane aspects of his life, from how his apartment is furnished to his conversations with his stooges. Rock doesn’t get in much action and only takes out a handful of mobsters, often saving Mimi from danger. (There is though a sadistic part where a trio of gunmen momentarily capture the pair and one of the guys jams the friggin barrel of his pistol up Mimi’s behind!) Also there are many scenes where for whatever reason Rock will appropriate a disguise, like a long bit where he and Mimi go to great lengths to look like street bums.

For once this particular author does bother to wrap up the tale, with Rock somehow bullshitting his way into a prison and arranging for the release of Mimi’s father; there follows a protracted scene where the man divulges how he was set up to the media. Rock ensures the guy doesn’t implicate Barbagallo, as Rock wants to deal with the bastard personally; after blowing up the mobster’s two bars he kidnaps a few of his stooges, jamming their half-dead bodies in the trunk of his car for no explained reason. Finally the whole group is dealt with in a perfunctory exploding of another Barbagallo club. It’s an anticlimatic end, but at least it’s an end.

Rayo Casablanca, over at his Sick Hipster blog, wonderfully (and accurately) summed up the Sharpshooter series: “These books feel like they were written by off-duty mall security guards.” Maybe he was thinking of this installment in particular. Here are a few excerpts from No Quarter Given that really made me chuckle:

Barbagallo opened the door to this room. He closed it immediately. He turned. He went to the left, to the kitchen. He opened the refrigerator. It needed defrosting so badly it was literally screaming. Except for a six-pack of beer it was empty. Down on his knees he performed a nightly ritual of trying to figure out why the light bulb behind the freezing unit didn’t work. As usual he gave it up, slamming the door. -- pg. 80

With lightening[sp] speed, Rock’s left fist slammed into the second man’s bewildered face. Blood spurted from his nose instantly. Then Rock chopped him savagely on the neck until his knees buckled and he slipped down to the floor. Rock swung the Beretta with the brute force of an express train. He realized in a flashing second that the blow had killed the man! -- pg. 130

After double-checking everything, planting three hi-blast grenades in Mimi’s ratty looking purse and arming himself with the Llama and the Beretta, Rock gripped two sad, worn shopping bags heavy with all the junk he could find in the apartment.

So what ever happened to Russell Smith? It's too common (or semi-common) of a name to easily track down.

Russell, thanks for the comment. I have a theory that "Russell Smith" itself might be a psuedonym. I mentioned this in an article I wrote for Justin Marriott's Paperback Fanatic, titled "Strange Justice." Here it is:

A name that’s come up in regards to Peter McCurtin and the Sharpshooter/Marksman books is George Harmon Smith, a writer who over the decades has turned out everything from childcare development books to trash fiction. Since 2000 or so he has self-published nongenre novels under the name “Frank Scarpetta.” At first I thought this was how Harmon Smith had (mistakenly) become associated with the Marksman books, but there’s more to it – after some digging I came upon a 1986 interview with him in a childcare development magazine, where Harmon Smith mentioned writing some Marksman books, but using a pseudonym so as not to “sully” his reputation as a childcare specialist. To me it appeared that he meant he was using a pseudonym in addition to the house name of “Frank Scarpetta.” So then, could George Harmon Smith and Russell Smith be one and the same?

I did see this on him.

"Let's go, slut!" New signoff for a podcast (or a conference call?)