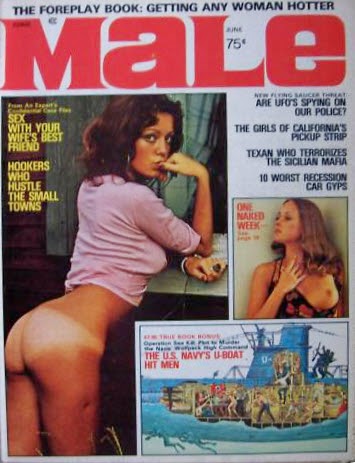 Amid all of the sex articles and advertisements there’s actually a pretty good pulp WWII tale in the June 1975 issue of Male: “The US Navy’s U-Boat Hit Men,” by Charles Kennon, a True Book Bonus that, while not as long as earlier such features, is still long enough to provide an enjoyable tale. It’s late summer 1942 and Navy Intelligence officer Tom Sapinksy’s mission is personal; earlier in the year his younger brother was killed when his ship was attacked by a merciless U-Boat that even gunned down the American sailors as they clung to lifeboats. Now Sapinsky is putting together a team of killers to even the score.

In pure Dirty Dozen style Sapinsky deliberately chooses the nastiest dudes he can find. Chief among them is Rick Jackman, a Chicago button man who Sapinsky had many dealings with back when Sapinsky was a cop in the pre-War years. He also gets a demolitions guy, a marskman, and finally rounds out the six-person team with Gretta Wulff, a Czech lady who has lived in Germany and will use her beauty per men’s mag tradition to ensnare horny Nazis. Unfortunately the brevity of the piece hampers Kennon from filling out the majority of these characters; it would be nice if there really was a true “U-Boat Hit Men” book.

Sapinksy considers the team to be “hit men,” and they really live up to the mantle; sneaking into Hamburg they go about murdering several U-Boat commanders who are all stationed here. The hits are carried out Mafia style, with captains getting gunned down as they leave whorehouses or being blown up by car bombs. There’s even a Godfather riff where Jackman walks right up to a captain as the guy’s having dinner in a restaurant and blows the dude’s head off, then calmly turns around and walks out.

Earl Norem’s cover painting actually illustrates a scene in the story, as the team converges on their last mission, ambushing a ribald party that goes down inside of a docked U-Boat. Kennon vaguely describes the lurid activities as drunk sailors cavort with whores while three of Sapinksy’s men get in frogmen gear and plant explosives on the U-Boat. This leads to a brief action scene with the team blowing away the emerging Nazis. Even the finale of The Dirty Dozen is followed, with the team suffering major losses – even moreso than in EM Nathanson’s novel.

The rest of the material is the expected “sex research” stuff, but there’s also “The Texan who Terrorizes the Sicilian Mafia,” a Joe Dennis tale about Vincent D’allesandro, a Texan on honeymoon in Sicily where his wife is gunned down when the couple stumbles upon a mob war. D’allesandro trains himself in the use of the lupara, aka the mini-shotguns favored in this part of the world, and hooking up with a pretty local gal he wages war on the Sicilian mob responsible for his wife’s death – in between bouts of sex, of course, D’allesandro quickly learning to move on after the loss of his wife. 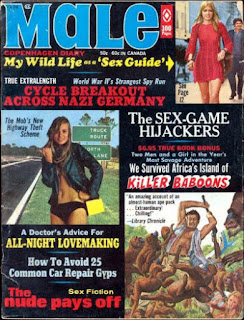 The extra-length story in the April 1971 Male is even better: “Cycle Breakout Across Nazi Germany,” by Charles Warner, a fast-paced tale in which an OSS agent named Arnold Wassserman ventures into Germany to find a woman that has valuable intel and then deliver her into Allied hands. However the woman, Utta Wulf, happens to be a Nazi officer, and Wasserman is uncertain if he can trust her. The “cycle” is a BMW motorcycle with side car that will serve as their sole means of escape to Switzerland.

Warner opens the story with Wasserman and Utta already sleeping together – again, per men’s mag tradition, the gal freely gives herself to the guy mere moments after they meet – and Wasserman still wondering if he can trust her. She’s a high-ranking member of the SS and has the double lightning bolt sigil tattooed beneath her right arm, “marking her now and forever as a member of the Nazi party.” Wasserman’s uncertainty is compounded when a savage pounding comes at the door of Utta’s apartment, and she cracks it open, sticks out her Luger, and blows away whoever’s standing out there, sight unseen!

Of course it turns out they were Nazis – “Only the SS knocks on doors like that,” explains Utta. Wasserman is here because Utta’s uncle was a Nazi scientist who worked with the jelly needed to create bombs; sickened by the war he turned on the Nazis, contacting the Allies and offering to let them know where the secret jelly-producing plants in Germany were in exchange for exfiltration from Nazi Germany. He was killed before this could happen, but Utta has the info, which she has memorized and won’t give away until she’s safely out of Germany – she too claims to now be against the Nazi party.

The titular cycle plays only a small part, Wasserman driving as Utta sits in the side car. There’s only one action scene in it, as they break through a Nazi gatepost, Utta mowing down the young soldiers with her “special SS” submachine gun. Wasserman himself doesn’t do much, and Warner plays up more on the characterization, with Wasserman given more depth than the average men’s adventure protagonist. Haunted by past missions, ravaged both physically and mentally, he just wants to get this final mission done so he can escape to a desk job. Given this, he makes numerous mistakes throughout the story and is fraught with self-doubt.

Utta handles the brunt of the action, and also provides convenient shelter for when they head into a massive snowstorm; Utta’s conman cousin, who lives near the German/Switzerland border. But the dude tries to turn in Utta for the reward, and in the quick fight Wasserman’s forearm is mostly blown off and Utta wastes her cousin. Wasserman wakes up to find himself safely in Switzerland, where Utta has brought him; after giving the Allies the intel she stays there, and we learn in a postscript that she was actually a deep-cover Russian spy.

On an adventure fiction tip there’s “We Survived Africa’s Island of Killer Baboons” by Ken Dawson, a first-person narrative about an adventurer who is hired to fly an anthropologist and his sexy daughter onto infamous “Ape island” in Mozambique. This is a fairly long story and of course plays up to the expected tropes, with our hero and the daughter, Ilse, getting cudly as they make their way to the island, culminating in lots of violence as the legendary man-sized baboons attack them. 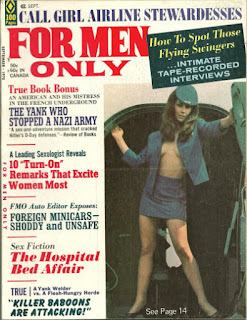 It isn’t just a “True Book Bonus” in the September 1970 For Men Only; no, it’s also “soon to be a major motion picture!” But this is a double lie, as there was never a book or a movie made out of Grant Freeling’s “They Cripped Hitler’s D-Day Defenses.” A shame too, because while it isn’t as good as the “Sex Circus Stalag” story I recently read by Freeling, it’s still a lot of fun, if perhaps focusing more on intrigue and suspense than lurid thrills.

It’s May 1944 and Captain Jack Maitland, a “yank saboteur” with the OSS, once again ventures into Occupied France to work with a branch of the French Resistance he’s fought beside many times before; the OSS believes that one of the three leaders of this branch is actually a Nazi informant. Maitland stays on a farm, put there by Coutard, one of the Resistance leaders and thus one of the suspects. Also staying in this farm is Angelique Dubois, a Resistance member who is hiding out after an attack on her own branch – and you wouldn’t be surprised to know that she has the mandatory brick shithouse bod and the looks of a supermodel.

Coutard however has a definite interest in Angelique, so Maitland plays it cool, focusing instead on his mission. He sets it up so that each man must go on a perilous assassination mission, Maitland going along, the idea being that, if one of them is a traitor, he will take advantage of it being just Maitland and himself and thus do away with Maitland if the opportunity arises. However none of the men prove to be traitors as they kill the Germans. The hits are a bit novel, for example one of the Germans being taken out by an elaborate bombing scheme as he rides along in his staff car.

Angelique eventually demands that Maitland have sex with her (one thing I’ve learned from these men’s mags is that curvy and busty European women just friggin’ loved American men in WWII). But Coutard finds out and goes into a rage, so that Maitland figures he must be the traitor. But it’s an obvious red herring, and while Coutard drops out of sight Maitland plans a Force 10 From Navarone style blowing of a bridge. But then Coutard appears, proving who the real traitor is (one of the other leaders, who faked the car bombing murder of one of the Germans), and we learn in postscript that Coutard eventually got Angelique to marry him, once Maitland was back home.

“How Call Girls Work as Airline Stewardesses” seems tailor-made for Curt Purcell over at The Groovy Age of Horror. It’s by Linda Ann Sanders “as told to” Barry Jamieson and is the first-person narrative of a hooker who inadvertently became a groovy stewardess, taking advantage of the fact that the job put her in touch with wealthy men, men she eventually turned into her johns. Eventually she puts together a group of stewardesses who all do the same thing, but for the most part Jamieson’s story is more of a background piece on how Linda Ann got started on her “cathouse on wings” scheme.

“Infiltrate, Destroy, Saigon’s Black Market Money Changers” by Don Honig immediately shows its fiction roots: it’s credited to Honig but it’s in first person, and the narrator says his name is “Doug” and that he’s a spy in Saigon! The story though is tepid, our hero going undercover to find out where all the disappearing war funds are going in Saigon; this leads him to a group of black marketers, culminating in a shootout. More faux-“true” stuff is found in “Held Hostage in the Grand Canyon by Three Sex-Starved Convicts,” a survival epic by Larry Wilson “as told to” Sean Sterling, in which the narrator and his wife are kidnapped by the titular convicts, who rape the narrator’s wife before the narrator is able to turn the tables on them.

The “special fiction” tale is “Doctor In The Nude” by Alex Austin, a hilariously pre-PC story about a ladies man who is in the hospital for minor surgery and is shocked to not only discover his doctor is a woman, but also that she’s smokin’ hot. He fantasizes about screwing her, and eventually finds himself having vivid dreams of her coming to his bed each night. Turns out these aren’t dreams – no, the good doctor is merely drugging the guy and then slipping into his bed after the meds kick in, screwing his brains out!

Finally there’s “I Smashed a Killer Baboon Pack,” another faux-“true” deal, this one by Pat Hollister “as told to” Tom Christopher; similar to the baboons story above, this one’s about an American engineer building a hospital in Africa where roving baboon packs are sowing hell, so he heads a party into the bush to blow the little bastards away. Man, the guys at Diamond magazines must've really had something against baboons.
Posted by Joe Kenney at 6:30 AM