Joseph Rosenberger: The Man, The Myth 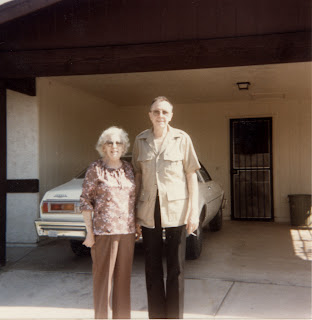 Here, thanks to a very kind contributor who would like to go uncredited, is an actual letter from the man, the myth himself: Joseph Rosenberger. (And also a huge thanks to that same contributor for sending me this photo of Rosenberger and his wife, Virginia, taken in 1984!)

The original plan was to run an essay on Rosenberger, but as it turns out, this letter tells us more about the man than any other piece could. Perhaps a little too much. It’s my duty to inform you that portions of this letter are incredibly racist, and will perhaps shed light on an aspect of Rosenberger’s image that might’ve been better left untouched. But then, given the paucity of any kind of info on the guy, I thought I should upload the letter anyway, with the racist terms expunged. Also, it’s my bet that those who are familiar with Rosenberger will not be surprised to read some of the sentiments he expresses herein.

But then, as the contributor told me (and as Rosenberger himself admits in the letter), JR was a heavy drinker, and “it’s readily apparent how he gets drunker as the letter goes on.” Note too how in his "rules for life" at the end of the letter Rosenberger states that he judges people as individuals, not by race, as if the previous pages of vile vitriol had been written by someone else. In fact, reading this letter I don’t feel so much anger over the ugly sentiments expressed – instead, I start to feel sorry for the bitter old bastard.

And finally, one more piece of data on Rosenberger: He passed away in Phoenix, Arizona at the age of 68, on December 2, 1993. 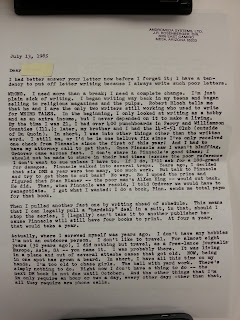 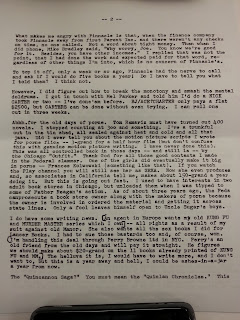 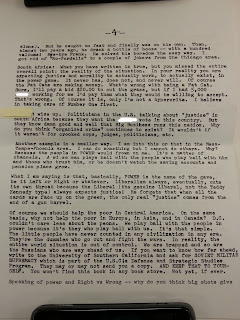 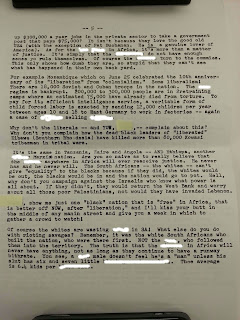 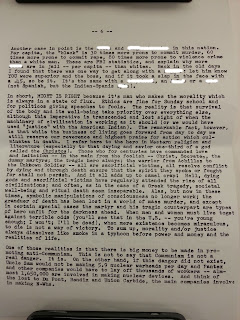 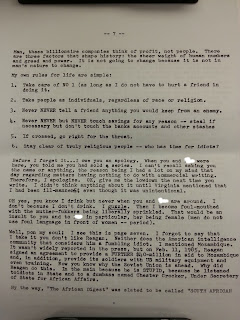 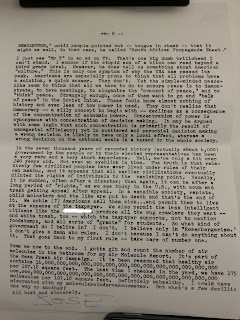 Wow. Love that last paragraph.
Now I gotta read some of his books...

That really is a pretty dark and depressing look into the mind and soul of a guy who's been through a lot in his life, to say the least. Fascinating and horrible in equal measures.

To step back for a moment, the earlier parts of the letter where he's talking about the publishing business are pretty sad. It's amazing to see how awfully he and the other writers he talks about were treated. Having to repeatedly threaten your publisher(s) with legal action every time you want a royalty check, and being told things like "What are you worried about? You've got other income sources" are a real eye-opener...

Yeah, the attitudes Rosenberger expresses in the letter aren't a surprise. You find the same thing coming out of the mouths of the Death Merchant and other characters in the later books. It makes me wonder how close Richard Camellion was to a "self insert" version of Rosenberger, minus the combat and disguise skills.

If Rosenberger was being even halfway honest about his life in this letter he was an interesting character, even if he was a racist creep. For example his comment about knowing Robert Bloch, and having written for Weird Tales.

To be fair I doubt Rosenberger was more racist than a lot of his contemporaries. You'd probably find his attitudes pretty typical of a lot of his generation.

The late periods Death Merchant books, after Dell took over the franchise I think, have a cover blurb about sales having reached over 10 million. I get the impression he didn't see much of the profits even if he was getting royalties.

Thanks for posting this.

The letter reads much as I thought it would -It's Rosenberger distilled, really, isn't it? Rants that veer off, philosophies that are all over the place, and the casual hate and nastiness - all of it permiates his works, so it goes to figure this was all part of the man.

I'm hugely grateful you've managed to find a picture, too - he seems nothing like I imagined.

His take on the political situation in the U.S. back then sounds like what the far right says today; he may have a point about how a democracy gives up its rights after a disaster, ie 9/11. Why isn't there more rage about electronic surveillance? Because allegedly it keeps us safe. He's also not the first to point out that, historically, republics haven't gone much further than 200 years, but I forget who else said it. Whoever did said it much more eloquently and intelligently.

The redacting does allow one to concentrate on his remarks about the living situation in South Africa, at the time, and I would be interested in learning more about that, if only to see if what he described was true.

He was totally wrong about the Soviet Union, though, as history has shown. The CIA knew as early as 1986 that we were beating them economically, that given a few more years their system would crumble; it did, and we are now witnessing the result. Whether or not that is good or bad I leave to others to determine.

Thank you for that. Really interesting. In parts it was Camellion speaking.

What puts the DM above other series that as a reader you got the impression that the writer really was serious with all his nonsense. Not just written tongue-in-cheek, having a little laugh at the audience. This confirms it.

He wrote this series for 15 years. Which in this kind of market is a big success. It can't have been much fun to do this in such a hostile environment. Even if a lot has to be imagined slights and bruised Egos, there are quite a few writers giving the impression that the publisher thought he could get away with everything and the writer was the least important part of the chain. Still hasn't changed.

Seems that the Carter people didn't share his views on this series, though. There is just one novel attributed to him. It wasn't very good.

Also seems that all those plans for foreign editions fell through. Apart from some DMs in the UK I never found a, say, italian or swedish editions of Murder Master or Kung Fu.

But the most baffling thing was the part about Weird Tales. The Content is so thoroughly documented and reprinted, what did he write for Weird Tales? Under what name?

He remains an enigma :-)

Wow, an amazing document. I loved the first part, makes it sound like being a commercial fiction writer is living in a world of petty crooks and con artists. He had his fingers in a lot of interesting pies there!

Further comment should be made about his Pinnacle experience. I'm not surprised at all that he had such a hostile attitude toward them, because I know of at least one other author who also hated working for them. The author recently passed away. I won't mention his name. I will, however, say that he wrote one of the major action-adventure series of the '80s which dealt with nuclear war. When a film producer wanted to buy the rights, for some reason he went to the publisher to find a way to get in touch with the author. When the publisher, Pinnacle, realized they had the potential to ax the author out, they sent him a new contract for more books. "Hurry and send it back! We've got a bright future ahead! Come on, hurry!" The author was ready to sign, but his wife discovered that there were pages missing. When they were sent the missing pages--"So sorry, luv, these things happen"--they found out about that they were about to sign over all movie rights to the publisher. Pinnacle left those pages out so they could later claim the author did it of his own free will. A movie was never made, but the author did sell the rights to at least three books in an attempt to produce a proper screenplay.

The author told me this story when we did an interview for my blog; he mentioned that the new regime at the current incarnation of Pinnacle is nothing like it was back in the day. We hope.

This was both a fascinating and depressing letter. Pulls the glamour right out of the writing life for the kids who picture it from shows like Castle and Bones, etc. I have a couple of Death Merchant novels in my shelves but have yet to tap into them. Thanks for sharing this.

Amazing find! Somehow I'm not all that surprised at Rosenberger's crazy extremism... I think there was a lot of him in the Death Merchant, and the Death Merchant was definitely a headcase. Definitely a car-wreck of a read... kinda makes you sick but you just can't stop looking at it. He seemed pretty paranoid of everything... except of Pat Buchanan, which testifies to just how wacko he was.


The picture is kind of how I pictured him, even down to the slacks. He looks a little taller than I'd figured he'd be, though...

Knowing he was such a virulent racist is going to make reading those couple of Murder Master books I've got pretty interesting... once I ever decide to tackle his prose again. It wouldn't be so bad if there just wasn't so damn much of it.

It does crack me up a little that his letter's eight dense, keep-going-'til-it-falls-out-of-the-typewriter pages long... just like those Death Merchant books, he just couldn't stop babbling. I'm only surprised there weren't footnotes. :) He didn't like the way Pinnacle treated him (can't blame him for that much) but I bet he was still turning in about double the word-count they required on each of those books. That's the main problem with those Death Merchant things, they're way, way, way-way-WAY too long for what they are.

Anyway, incredible find, there. He wasn't a good man, he wasn't a good writer, but he was still somehow fascinating in a strange kind of way. Kind of like Jerry Ahern, who, from everything I've seen, was almost as crazy.

Fascinating and very candid letter from one of big names in men's adventure novels. Thanks for this information. I wish we had more about him. I remember you posted a interview with Rosenberger back in July 2012. Maybe you can provide a link, etc.

I think censoring this letter is preposterous. Shame on you.

Thanks everyone for the comments, I enjoyed reading what you all had to say.

Walker Martin, the direct link to the Rosenberger interview I posted last year is:

Cap'n Bob, I understand how you feel, but it was either that or only post a portion of the letter. Removing the racist stuff was one of the requests of the person who sent me the letter.

Wow, what nonsense. Full of racist rants then his cardinal rule #2 is to treat people as individuals regardless of race. He would have fit well in today's politics.