Slaves Of The Empire #2: Haesel The Slave 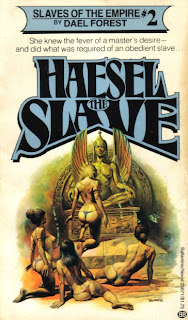 Slaves Of The Empire #2: Haesel The Slave, by Dael Forest
August, 1978  Ballantine Books

As we’ll recall Hadrian has been hired to build a new town, which he does with the assistance of his co-planner, the slave Haesel, who has a long-simmering sort of thing for Hadrian, and vice versa. But now at this orgy Hadrian also is asked to head up a new Games, so he must figure out how to get animals and prisoners and gladiators for the event; he tasks his chief slave Cornutus with this, so there’s yet another new character to contend with. Meanwhile Haesel’s brothers and sisters still are slaves, except for studly Saelig, who remember had a fling with Hadrian’s wife Areta.

Saelig was whipped very harshly at Areta’s command in the climax of the previous volume, and we discover that Areta is bereft and has gone down to Baiae to mope. Saelig meanwhile has made a full recovery and has forgiven her. So moved by the slave’s obvious love for his wife, Hadrian gives Saelig his freedom. He offers to do so for Haesel as well, but she’s vehemently opposed to the idea; for reasons unexplained, she is determined to remain Hadrian’s slave until he feels that she has rightfully won her freedom. She doesn’t want a free handout, and this rightfully puzzles Hadrian, given how outspoken the girl has been about the unjustness of her slavery.

Meanwhile Haesel’s sister Mertice still pines away for Alexander, despite that he’s given her to the lusty object of his affections, Melanos. As sick as we readers are of seeing Mertice moping around, Melanos orders her chief of slaves to fondle the girl on a daily basis! Melanos herself has some fun; while at the Baths in a nicely-elaborated scene, she runs into Plautus, a young soldier of high family who has just returned to Rome after years away. Frances here really brings to life the decadent atmosphere of the Roman Baths, and the new couple rush back to Melanos’s place to have sex.

Frances does a better job sensationalizing his otherwise tepid soap opera: the long-simmer relationship between Hadrian and Haesel catches a little fire when Haesel gets bitten by a snake on her thigh and Hadrian does the ol’ “suck out the poison” routine. He also has Saelig, now a free man, making obvious moves on Areta. The most lurid sequence though would have to be the very long scene at the Ampitheater (which Frances confusingly refers to as “the Forum”), all of it pretty much taken straight out of Daniel Manix’s Those About To Die, with virgins being raped, prisoners being gutted, and charioteers crashing spectacularly.

I’m still having trouble putting together when this all takes place. The Emperor briefly appears during the Games sequence, but he is not named and we are just informed that he’s old and that there are factions of highborn and soldiers aligning against him. At first I thought a clue might be found in the name of the town Hadrian is building, Trebula, but a cursory Googling reveals that there were three such towns in Italy during the Roman era, and all of them predate the Empire. At any rate the Slaves Of The Empire series definitely takes place after the days of Nero, mentioned here as “long dead.”

The lurid quotient continues apace as Frances dives straight into a chapter-long recounting of a Bona Dea ceremony, as Melanos and her fellow female worshippers strip down, anoit themselves with oil, and get themselves nice and randy so they can set themselves loose on some lucky men of their choosing. In Melanos’s case it is Platus, Frances having built up the anticipation between the two, Melanos abstaining from sex until the night of Bona Dea, and Platus grinning and bearing it.

Platus meanwhile serves to bring more action to the tale, at least indirectly; plotting against the Emperor with others, he maneuvers an assassination attempt which is quickly uncovered, and we learn in passing that Platus has been tortured to death! Oh well, so long Platus. Melanos however finds herself knocked up after that night of Bona Dea passion, so she politely informs Hadrian that she’ll no longer be having casual sex with him. So too does another high-born Roman gal Hadrian has a relationship with, so that within a short span of time Hadrian finds himself without any friends-with-benefits.

This leads to the culmination of the Hadrian-Haesel situation, at least. Growing increasingly short-tempered due to his lack of sex, Hadrian finds himself snapping at others and even checking out the female slaves. Plus Haesel has become more and more distant ever since he sucked the poison out of her thigh, and it gets to the point where Hadrian can’t take it anymore and orders Haesel to remove her tunic in his presence. He’s going to make her his sex-slave whether she likes it or not, even giving her a place of her own and calling on her every once in a while – there will no longer be any need for her to actually work.

But Haesel again turns the tables, going into “slave mode” and telling Hadrian she will do whatever he orders, when Hadrian can easily see that she is against the whole thing. But it all finally leads up to the two having sex, at long last – the trick being that Hadrian breaks down and tells Haesel he can’t order her to love him, he can’t make her do what it is against her nature to do, she can only do what she wants to do, and this it turns out is all Haesel has been waiting to hear.

And with this long-simmer relationship coming at long last to boil, the book abruptly ends. It would probably be smart to go immediately into the third volume, but the placid nature of this series sort of dulls the reader’s senses, so it’s best to take some time between installments. But overall Haesel The Slave was at least more entertaining and sordid than its predecessor, which makes me hope that future volumes will continue the trend.
Posted by Joe Kenney at 6:30 AM