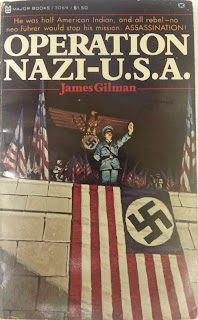 This paperback obscurity was published by Major Books, a low-tier house that eventually took over Kin Platt’s Hitman series. Bill Pronzini rhapsodizes about the stupid greatness (or great stupidity) of a few Major releases in his Gun In Cheek and Son of Gun In Cheek, but ultimately Operation Nazi – USA doesn’t come off like a “so bad it’s good” sort of thing; instead, it’s much like the Hitman books in that it obviously doesn’t take itself seriously.

The book also comes off very much like the first volume of a men’s adventure series that never was. Our narrator hero is Rain Allison, aka “The Indian,” aka “Scorpion,” a member of a secret government strike force called The Peacemakers. Like the Expeditor, Rain was raised by American Indians and often refers back to his ancestry and the wizened secrets he has been imparted. His signature weapon is a Colt .45 Peacemaker but he carries an M-16 for heavy fire, he wears a belt that has a knife sewn inside of it, and he drives a combat van that’s tricked out with four levels of security: a loud alarm, a jet of “simulated skunk spray," a burst of high-voltage electricity, and finally a stream of concentrated napalm.

How Rain became a Peacemaker is just another indication of the goofy nature of the book: His father was a famous soldier who fought in WWII, Korea, and ‘Nam, where he was killed. Then a few years later the commander of Rain’s father, General Wheeler, approached Rain and told him it was his “duty” to help the nation, and ordered him to become a Peacemaker! General Wheeler is only hinted at throughout the novel, until making an appearance in the finale; Rain has a habit of reflecting back on the various teachers of his life, and more importantly the lessons they taught him. Truth be told, this gets annoying after a while, especially the way Gilman works these lessons into the framework of the narrative.

We meet Rain as he’s already on his latest mission, deep under cover within the American Nazi Party, where he is known as “The Indian.” He serves as security for Steffan Lincoln, the leader of the ANP, and his mission is to assassinate the man. First though Rain must thwart Lincoln’s plan to poison the Harlem water supply. As Operation Nazi – USA opens Rain is about to make his move when it turns out that Lincoln has vanished; Rain figures the man must’ve figured him out and thus escaped.

The novel approaches a hardboiled feel as Rain makes his way through the ANP elite, killing most of them, as he attempts to locate Lincoln. There are a few action scenes here, but they all lack much spark, Gilman too stuck in his character’s thoughts to keep it exciting. One of the leads is Eleanor Schneider, a German national who has come to the US to aid the ANP cause; a lady endowed with “enormous breasts,” a fact that is mentioned every time her name comes up – this being an intentional joke. I should mention that there isn’t a single sex scene in the novel, though Rain states that he (and most other members of the ANP) have slept with Eleanor; Rain himself is still hung up on his college sweetheart, who married a guy named Lenny Wood, Rain’s former business colleague who himself has gone missing.

You might think, as I did, that all this “Lenny Wood/old college flame” stuff is extranneous detail, but it turns out to be (clumsy) foreshadowing: Lenny Wood becomes the novel’s villain. In a complete bit of deus ex machina, Lenny Wood appears out of nowhere, kills Steffan Lincoln just as Rain has tracked the ANP leader down to the Harlem water supply installation, and escapes in Rain’s van! The novel loses all grip on reality, at least what little it had, as Rain now has no idea what’s going on. So ensues an interminable stretch, which turns out to be the rest of the book, where Rain deals with the fact that Lenny Wood is somehow not only a master villain but has also taken over the American Nazi Party.

There are chase scenes, gun battles, and even a brief kung-fu fight, but it’s all just…I don’t know, boring and half-baked. Rain’s narrative voice is so casual that the fights have little thrill. There isn’t even much of a lurid quotient, or any of the outrageous sort of stuff one who expect from a mid-‘70s novel published by a low-rent house – you would expect that a novel with a Nazi lady with “enormous breasts” would have more pizzaz, but Eleanor’s barely in the narrative and when she is, she mostly just pines for her lover, Lincoln Steffan. There’s also an unbelieveable tenor to the novel, and not “unbelieveable” in a good way; the way coincidence is piled atop coincidence just comes off as lazy and a failed attempt at being funny.

There’s no way of knowing if this series was in fact intended as a first installment. At any rate Rain as expected is ready for more adventures by novel’s end (and the novel by the way includes yet more coincidence, with General Wheeler’s appearance amounting to a lame “surprise” reveal), but no more ever came out.

One mystery I can solve is who James Gilman was – a Google search yields a 1976 Catalog of Copyright Entries which states that Gilman was the pseudonym of Joseph L. Gilmore, an author who churned out a handful of books under his own name as well as several volumes of the Nick Carter series in the ‘80s; he passed away in 2005.
Posted by Joe Kenney at 6:30 AM