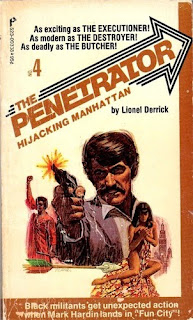 This was Chet Cunningham's second go as "Lionel Derrick," and though I was a bit hard on his first contribution to the series, #2: Blood On The Strip, I have to say Cunningham redeems himself in a big way here: Hijacking Manhattan is a whole bunch of lurid, trashy fun, and is probably my favorite volume yet of the Penetrator series.

This fourth volume also proves the line of demarcation between the two Lionel Derricks. Whereas Mark Roberts, author of the even-numbered volumes, delivers hard-edged thrillers along the lines of The Executioner, Chet Cunningham instead delivers sordid trash more in the vein of The Sharpshooter. Also, Mark "Penetrator" Hardin himself is a different character, depending on the author: in the Mark Roberts-penned books, Hardin is a tough s.o.b. who kills the bad guys with impunity but shows mercy when necessary, and is at heart a "good" guy. However in the Cunningham books Hardin is a psychopath more along the lines of Johnny "Sharpshooter" Rock, a nutcase who kills, tortures, and maims anyone who gets in his way. If the Penetrator was coming after me, I would pray for the Mark Roberts version.

Hijacking Manhattan could just've easily been a volume of The Sharpshooter or The Marksman. A cabal of black radicals calling themselves Black Gold has united in New York City, working with the Red Chinese to bring down The Man. Lead by a hateful little bastard named Abdul Daley, a guy actually kicked out of the Black Panthers for being too radical, Black Gold has begun a war against the nation. The novel truly preys on the fears of the conservative white male, circa 1974; Daley and his brothers (all of whom Cunningham repeatedly describes as "black" so there be no confusion) will stop at nothing to destroy the white man's world and usher in a new era of Black Power. Already they have destroyed one subway station in NYC and have threatened to destroy more if there demands are not met.

After a brief respite from his recent adventures in D.C., as documented in the previous volume, Mark Hardin gets on the case. This leads to one of the most enjoyable and unintentionally (?) hilarious sequences I've yet read in men's adventure fiction: Hardin, as white as the Hardy Boys, attempts to go undercover as a black man. Using makeup and a wig, he even walks the streets of New York City, attempting to learn how to "act black." It's like Soul Man with guns. What makes me suspect this entire sequence was an intentional joke is that Hardin is instantly discovered -- by an airheaded secretary at the Abdul Daley-run auto paintjob garage, no less.

About those disguises: this is another difference between the two Lionel Derricks. For Chet Cunningham also plays up the spy-fy elements of the series; Hardin is always wearing some sort of disguise, and even wears disposable gloves which have fake fingerprints on them, gloves which look like real skin. This is a nice "bit" which gives the otherwise-bland Penetrator a nice spin. However as mentioned his disguise fails in this instance and so Hardin must revert to his usual method of investigation: ie, killing everyone.

As these things happen in the world of men's adventure fiction, Hardin eventually meets up with a gorgeous gal who helps him: Joanna Tabler, who claims to work for a private detective firm but whom Hardin suspects is really a government agent. The two have instant chemistry -- Hardin has Joanna strip all the way down when he meets her, to ensure she isn't wearing a wire -- but our hero keeps her at arm's length, not wanting to get involved with a woman (apparently forgetting that he slept with another woman in the previous volume).

Meanwhile Abdul Daley and his gang bring New York City to its knees. Their demands are always carefully stated and go off without a hitch. First they insist upon a black female cop delivering the initial payment of ransom money -- money they demand if the city wants to prevent another bombing. In a lurid sequence they abduct the cop and gang-rape her; the last we see of this unfortunate character she's hog-tied to a hotel bed, wondering how long until she's freed. Did Cunningham forget about her? The next ransom-paying sequence is more humorous, as Black Gold demands that the millions be delivered by "a midget in a Honda Civic." There's more hilarity as Hardin watches the TV newscasts of the failed attempts by NYC cops to stop Black Gold, the newscasters snidely berating the cops for their stupidity and many failures. Hard to imagine in today's "unbiased" media.

Hardin gets in several battles and tortures various stooges, showing no compunction for age or innocence. In one WTF? scene he cripples some poor college kid whom Hardin suspects of Black Gold-alliance just because the kid's a member of a Black Power movement -- a nonviolent one at that. In another scene Hardin mauls a pair of Asian youths who run drugs; the first kid he carves up with a knife and then squirts lighter fluid into the open wounds, lighting them up with a match; the other kid he nearly strangles and then ruptures his ear drums. And yet, despite all of this we learn that Hardin "can't shoot a woman," one "Puritan" trait that he cannot shake; we learn this when Soo Lin, Red Chinese operative and Abdul Daley's lover, tries to kill Hardin, and Hardin finds himself unable to shoot back at her. It goes without saying that Hardin learns to overcome this failing of his before novel's end.

Of course it all leads up to a full-on assault by Hardin on the Black Gold compound, which is filled with trained and armed militants. This is a taut scene and very well done. Hardin, again in his "thermal suit," goes in alone with various weapons, including an Uzi and a few white phosphorous grenades. This must've been one of the first appearances of an Uzi in men's adventure fiction, as Cunningham spends a few paragraphs explaining it. This sequence comes off like 24 a few decades early, as Hardin discovers that Black Gold has an experimental virus which they plan to unleash on the city; Hardin, outgunned, must get the virus out of the compound before it blows. And again Hardin takes more damage than the typical men's adventure protagonist; he gets shot in the chest in the climax and must crawl, half-dead, for an awaiting helicopter.

After a bit of field surgery in Joanna Tabler's apartment, Hardin is ready for a brief vacation with the lady in Miami or somewhere equally sunny. This implies that the two are about to become an item -- it's clearly stated that Joanna has fallen in love with Hardin -- but a brief glance through the next volume shows that Joanna does not appear. Oh well. The Penetrator can't be tied down by any one woman!

I really enjoyed this trashy and fun installment and now look forward to continuing on with the series.
Posted by Joe Kenney at 8:40 AM

Just remember - the bad guys in this book are "black". I know it's tough to remember, but don't worry, we're reminded of it about three times a page!

I have a few more Penetrators kicking around - one of these days I'll crack open another and see how it goes.

Overall I liked this book. I thought the whole black-face costume was hilarious and ridiculous. But, I thought the action scenes were well done and interesting.

I'm currently reading Penetrator #5 and I have to say I'm not liking it as much as this one. You can definitely tell the difference between the 2 writers.