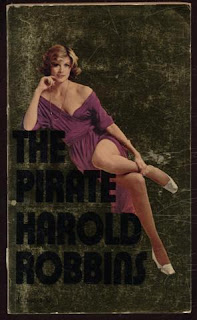 First published in hardcover in 1974, Harold Robbins's The Pirate walks the middle ground between the epic feel of his 1966 The Adventurers and the coked-out madness of his 1984 Descent From Xanadu. I enjoyed it more than the former but not as much as the latter, which was, well, more coked-out. The Pirate goes to the same crazed heights as Xanadu at times, but other times it's grounded in banal "business meetings" or go-nowhere subplots, many of which seem to have come from the mind of a writer too uninvolved with his story to care. But then, by this point in his career Robbins was a multi-millionaire, and rather than a writer he was more like a corporation, churning out a steady stream of product.

"The Pirate" is Baydr Al Fay, super-rich Arabic entrepreneur who unbeknownst to himself is actually a Jew. In a gripping prologue -- one of the best scenes I've yet read in Robbins -- we learn the story of Baydr's birth in 1933. Two families meet in a raging desert storm: a Muslim husband with a pregnant wife and a Jewish husband with a pregnant wife. The Muslim is wealthy doctor Samir Al Fay, the Jew is grizzled soldier Isaiah Ben Ezra. Samir is desperate for a son; the Prince of Beirut, childless, has decreed that Samir's son will be heir to the throne. Samir has gone to Mecca to pray for a son, traveling with a caravan of his people; Ben Ezra and his wife have ridden alone into the desert, as his wife wanted to give birth to their child in the holy land.

The raging desert storm squashes all plans, and Ben Ezra and his wife suffer miserably, both near death. It ends with Samir's wife giving birth to a stillborn daughter and Ben Ezra's wife dying after giving birth to a healthy son. Seeing the hand of "one god" in this, Ben Ezra gives his son to Samir. Only the two men are aware of the boy's true lineage, as Samir's wife was unconscious during the delivery. The men say their goodbyes, Ben Ezra rides off into the night, and Samir names the child Baydr, vowing to raise him as his true son. It's a taut, effective, and emotional sequence; Harold Robbins by way of O. Henry.

The narrative then jumps ahead to 1973 and, rather than becoming heir to the throne of Beirut, Baydr has instead become a globetrotting millionaire. The Prince saw a grander scheme for Baydr than royalty; realizing the importance the Middle East would gain due to oil, the Prince had Baydr schooled in the West so he could learn their ways. Now Baydr is more Western than Arabic, but still grounded in his (supposed) heritage, and therefore distrustful of the Jews. The sentimental feel of the prologue is quickly forgotten as we meet Baydr in action on his private 707; he snorts a few amyl-nitrate poppers and engages in some friendly anal sex with a pair of hookers. That's one way to introduce your protagonist, I guess.

Now 40, Baydr has an ex-wife, an Arabic girl who only bore him daughters, and a current wife, a blonde American sexpot named Jordana with whom he has two sons. Baydr was given the same promise that his father was; Baydr's 10 year-old son, Muhammad, will be heir to the throne. But like the usual Robbins hero, Baydr comes off more like a self-involved ass than a doting father; he leaves the boys with Jordana, whom he no longer associates with, and instead flies about the world, snorting coke, smoking hash, and screwing prostitutes. He sees Jordana and the boys only occasionally. As for his daughters from his previous marriage, he hasn't seen them since he divorced their mother over a decade ago. This has driven one of the daughters, 19 year-old Leila, into a frenzy of anger, such that she now plots with a PLO-type group of radicals to blackmail the conservative Baydr into working for their revolutionary cause.

This subplot simmers for a while as the first quarter of the novel instead revels in the decadance of the French Riviera in the spring of 1973. Here Baydr reunites with Jordana in Cannes, during the film festival. There's a lot of trash fiction goodness on display, with jet-setter parties along the Riviera, soap opera melodrama, and the expected Robbins weirdness; Baydr treats Jordana like a piece of property, and she gets off on it.

There's also treachery: one of Baydr's top employees in this area is Youssef, who works against his boss to fatten his pockets. Besides conspiring with the above-mentioned Palestinian liberation group (for the money, not the ideals), Youssef also employs his omnisexual lover Jacques to use his "beautiful ten inches" to woo Jordana. Baydr's wife it seems is just as free-spirited as the man himself; this is recounted in another bizarre flashback where Baydr -- our hero, remember -- forces Jordana to snort amyl-nitrates as he basically rapes her, then afterwards tells her he has no further interest in her and that she will be his wife in name only, and also that she is free to sleep with any other man she wants -- as long as it isn't a Jew (note the irony).

Robbins never bothers to explain why exactly Youssef wants to set up Jordana, but who cares, because this sequence is the most entertaining in the novel. We get more coke-snorting scenes in French discotheques as well as the most explicit moment as Jordana hooks up with Jacques's lover, a black American named Gerard, who introduces Jordana to the pleasures of putting cocaine on unexpected parts of the anatomy.

Things settle down as Jordana goes back to California and again reunites with Baydr. Here the novel gets bogged down in interminable business meetings and other scenes of characters talking ad naseum about things they plan to do. Here are also the poorly-spun subplots, such as Baydr hiring an anti-Semite director named Michael Vincent to write and direct a film about the Prophet. This goes nowhere and the Vincent subplot is basically written off. There's also an appearance by a Charlton Heston-type who has sex with Jordana; the man enjoys secretly taping his conquests, and Yousef comes upon the tape. One really gets an idea of how much time has passed when Robbins spends so many paragraphs explaining how a VCR works!

The subplot with Baydr's ignored daughter Leila serves to boost the narrative. We follow her as she trains in a camp for women somewhere in the desert, becoming a grim warrior of the jihad. Her orders are to insinuate herself in her father's life, and to await further orders. The novel winds up for its big conclusion: Leila becomes a secretary for Baydr in his new home base in the Swiss Alps. When Jordana takes the boys on their flight home, Leila and her compatriots hijack it, abducting Jordana and the children to a mountaintop retreat in Baghdad.

A big action scene follows; since the Prince is unwilling to help Baydr (it would look bad for him in the eyes of the pro-Palestine groups to help fight one of their subsets), our hero has no idea what to do. However it develops that one of Baydr's inner circle is a secret Israeli agent. And this agent knows of one man who can help -- a battle-hardened Israeli general who is legendary among the Jews and the Muslims he has fought.

Guess who it is? That's right -- Isaiah Ben Ezra, aka Baydr's biological father. Leading a ragtag team of Israeli soldiers and Yemeni fighters, old Ben Ezra infiltrates into the mountaintop retreat for a late-night attack. It all climaxes with the usual sentimental ending for all concerned, though the Happily Ever After for Baydr and Jordana is a little hard to buy, given all that's happened before. But what the hell. All told, this is another entertaining Harold Robbins nover which races from beginning to end, with only a few bumps along the way.

Special mention must be made of the NEL edition, which really plays up the "pirate" angle -- it's nice but it's misleading, as no character in this novel wears an eyepatch! 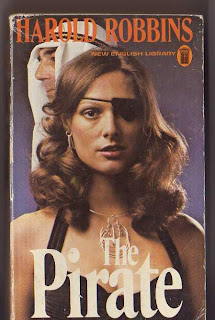 I'm going to have to give HR a try. The library here has 1949's The Dream Merchants, so that's the one I'll go for. Have you read it? Opinion?

Karla, thanks for the comment. I have that one but haven't read it. My trash fiction-loving friend Martin Boucher rates "Dream Merchants" as the worst HR book.

He was a bestselling author from his first book, but it's with the '61 "Carpetbaggers" that he became the Harold Robbins who was so famous for decades. IE, his novels got dirtier.

I plan on reading all of the post-Carpetbaggers books before I go back to the earlier ones. One good thing about Robbins is that since he wrote so many damn books and they all went through multiple printings, you can always find at least one or two of his novels for cheap at the local used bookstore.

Indeed, "Dream Merchants" is a snooze. Very technical and dry. I would choose "The Carpetbaggers" instead if you want a taste of the real Robbins. Like Joe says, not as dirty as his post work but very rewarding.

Well, you've probably given THE PIRATE a lot more space than it deserves, as well as several of HR's other later titles. I've recently come to the conclusion that one can safely skip everything Robbins wrote after WHERE LOVE HAS GONE (1962). Yes, I read him in the '70s and '80s, and have read everything he published through TYCOON (1997) [except for about 2/3 of THE STALLION, that is, which was so bad I couldn't finish it, and was, as was everything after THE PIRANHAS, ghost-written due to HR's health problems]. If ever a novelist was spoiled by success, it was Harold Robbins. Enjoying your blog very much, by the way!

I had to look up “roman de gare”--I even had to get Google Translate to translate the French Wikipedia page! For those who, like me, didn’t know, it’s the equivalent of “airport novel”--trash fiction you buy at the airport bookstore.

Joe, do you remember that episode of Fawlty Towers with the American couple and the Waldorf salad? The American lady says she loves Harold Robbins books and that The Pirates is his best! Then Basil calls it “the most awful Transatlantic tripe,” the guests are offended, and Basil tries to say that he meant Harold Robinson.