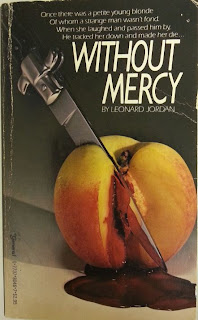 Without Mercy, by Leonard Jordan
No month stated, 1981  Zebra Books

The last novel to be published under his “Leonard Jordan” psuedonym, Without Mercy is yet another fine Len Levinson novel, once again bringing to life the seedy underworld of late ‘70s/early ‘80s New York City. It’s a thick novel, too, coming in at 312 pages – but with the big print and Len’s usual gift for storytelling you’ll blow right through this fast-moving tale.  (Also, it's recently been released as an Amazon-only ebook.)

The sordid story (which Len dedicates to Peter McCurtin, but Zebra screwed up and wrote “Peter McCurtien”) opens with a corpse found near Times Square, a murdered hooker who worked at a “massage parlor.” Detective Danny Rackman is on the case; Rackman is your typical Levinson protagonist, a down-on-his-luck sort with an ex-wife who still nags at him and a preteen daughter he rarely sees. The murdered girl turns out to be one Cynthia Doyle, a rather unattractive woman who worked with other downtrodden, unattractive women in a grimy massage parlor/whorehouse in Times Square.

Without Mercy follows the format of a police procedural for its first half, with Rackman tracking clues and questioning suspects. In a neat move we see Rackman on the murder scenes here in the opening half of the novel, before flashing back and seeing how the murders were carried out in the second half. Rackman though is very similar to Len’s take on Ryker, in that he’s an overworked and underpaid public servant who dreams of retiring into the good life some day. (In fact you could almost see this novel as sort of a sequel to Len’s The Terrorists.)

However Rackman is constantly a few steps behind this killer, soon nicknamed the Slasher by the press, his name derived from his fondess for slashing the throats of hookers or other sex workers around Times Square. The killings become more frequent and brutal as Rackman grasps straws trying to hunt down the murderer. He gets his biggest break when a bum comes across a jacket that matches the description of the one the Slasher was seen in, and here Levinson delivers a long and enjoyable sequence as the bum needs to be coaxed by Rackman into remembering anything of merit.

In fact the majority of Without Mercy is rendered in dialog, with Rackman having long conversations with his various witnesses and suspects. There really isn’t much action at all. Meanwhile Rackman tries to find the time for his estranged daughter, Sheila, but the sequence where he goes to visit her doesn’t lead up to much, despite heavy build-up. There’s also Rackman’s girlfriend, who wants to get serious with him and get married, and a recurring joke is that Rackman’s always asking her if she put in her diaphragm correctly – it seems she keeps “accidentally” putting it in wrong, likely in the hopes that Rackman will get her pregnant.

Eventually Rackman begins to see similarities between himself and the Slasher, as in they both obviously have difficulties with women, and he starts to see this killer as his own “dark half.” I found this element a little hard to buy, as Rackman is presented as too likable a person. Maybe if we saw that he was a dirty cop, or maybe if he kicked a puppy or two, maybe then I could buy into the “two sides of the same coin” motif Levinson tries to build between Rackman and the Slasher.

Around the halfway point the novel switches over to the point of view of the Slasher himself, and while the section with Rackman was enjoyable, this part is even better. Mostly because here Levinson delivers some very lurid material as he attempts to get inside the mind of a psycho. And also here he provides basically a walking tour of a Times Square that is long gone.

Frank Kowalchuk is a heavyset loser who barely makes a living as a cab driver in NYC; after various setbacks he’s now hanging by an emotional thread. When one evening he attempts to go into a massage parlor and is berated by the hooker (Cynthia Doyle) for being unable to get an erection, Kowalchuk finally snaps and begins to dream of murdering off all of the “dirty whores” who now pollute the streets of New York.

Soon enough Kowalchuk begins to enjoy killing, to the point where he drops out of his normal life as a cabdriver and lives on the streets, evading the cops that he knows will soon begin looking for him. He plots out his kills as he walks around Times Square, checking out all of the sex attractions. Levinson provides some very sordid stuff here, with long descriptions of the sex shows and hardcore films on display. And yet none of it is erotic, as the material and performers on display are so debased and worn out that they only appeal to the vermin who flock to these hellholes.

Kowalchuk doesn’t limit his murders to whores, though; in a jolting sequence he goes after a woman he dated a few years ago, a lady who refused to have sex with him. Kowalchuk abducts her on her way to work and, after forcing her to hand over all the money she “owes” him, he rapes her – only later do we learn that he slits her throat during the process, when the narrative switches back over to Danny Rackman.

Now our hero has become obsessed with tracking down the Slasher. There’s a bit of a narrative sleight as Rackman uses a female cop to try to ensnare Kowalchuk’s interest, but they end up finding him through good old-fashioned police work. Long story short, due to the photos circulated among the precincts, some beat cops spot Kowalchuk as he tries to stop in a YMCA for a shower.

However it does all lead to an appropriate action finale, in fact the only action scene in the novel, as Rackman chases after Kowalchuk. This leads into the bowels of the New York subway, where the two go at it in a fight to the death. And here the novel ends, a little abruptly it seemed to me; I was expecting some sort of resolution to Rackman’s internal plight, or at least with his estranged daughter and girlfriend. Instead Levinson leaves us on a vague note, ending the novel with the image of Rackman with his head in his hands, and whether it’s from relief, exhaustion, or grief he doesn’t say.

The other month I asked Len for his current thoughts on Without Mercy (as well as a few of his other novels); to my surprise he mailed me a writeup on each of them. Here is what he wrote about Without Mercy. As you’ll note he mentions that his original title was “The Massage Parlor Murders,” but Zebra changed it. I’m wondering if they did so because of the obscure 1974 grindhouse film The Massage Parlor Murders, a movie which has a similar plot to Without Mercy (though by all accounts the film is terrible).

THOUGHTS ON WITHOUT MERCY

Often I walked through the area, on my way to the library at 42nd and 5th, or to a certain health food store near the library, or to Macy's on 34th Street, or other destinations. As a social science major in college, and amateur sex maniac in private life, I soon found myself wandering into various Times Square establishments to see what was going on. Becoming increasingly intrigued, I started prowling Times Square at night when the action really was happening.

The women who performed in live sex shows seemed pathetic. The lonely, desperate men who drooled over them seemed even more pathetic. The aura of sexual sickness depressed me. But it also fascinated me, because it represented the human psyche in its most freaky modality.

It wasn't long before a story and characters started forming in my overheated imagination. I'm not the kind of writer who sits down and willfully concocts a plot. Instead, I see a movie in my mind, and write it down. It's more about inspiration than intention.

Nietzsche once said that when you look deeply into evil, then evil also looks deeply into you. I looked deeply into evil when I was writing "Without Mercy", and became scared by some of the elements I found inside my mind. I don't claim to be a great writer, but I don't like to make superficial characters. So I excavated that killer's head, and it's not a pretty picture.

When Truman Capote wrote about killers in "In Cold Blood", he presented them very sympathetically as poor lost guys who went wrong. My killer was not a poor lost guy who went wrong. He was a very disturbed, angry, violent, bad guy who nobody ever loved. Then one night everything got too much for him.

My title was "The Massage Parlor Murders", but the publisher, Zebra Books, changed it to "Without Mercy", which I'm not sure was an improvement. I read it recently for the first time in around 30 years, and found some of my usual maladroit sentences and examples of dubious logic, but the narrative tension and momentum still were working, at least for me.

I didn't realize it at the time, but I was describing in detail a world that soon would vanish. Times Square now is a branch of Disney World and Toys R'Us. The bleary-eyed, drugged out whores and pimps have gone elsewhere. I assume they're still in business in somebody's neighborhood, because as long as there are lonely desperate men, there will be bleary-eyed, drugged out whores and pimps groping for their money.
Posted by Joe Kenney at 6:30 AM

I remember reading another book published by Zebra at about the same time called SIN. I don't remember the author but the cover was nearly identical except the knife was cutting a cherry. Probably the same artist. I tried to look it up after I read this but a book called SIN is pretty hard to research without the author's name.

Dan, thanks for the comment. And thanks for mentioning "Sin," and the fact that it was a Zebra novel with a knife cutting a cherry on the cover.

Someone emailed me the other month about "Without Mercy," saying that she recalled reading a similar Zebra novel around the same time, one that also had a "sliced fruit" cover, but she couldn't remember the title. "Sin" certainly had to have been the novel she was thinking of.

I did a little research and found that the author's name was Robert Vaughn and the novel was published by Zebra in 1980. Only problem is, it must be pretty damn rare -- it isn't even listed on Abebooks, and the cheapest copy available on Amazon is a hundred bucks!!

Funny, I did a bit of looking online today and found the cover and the author too. There may be a reason why a copy would cost so much but it isn't because of the quality of the writing. It's a pretty typical, late 70s/early 80s, sleazy, Zebra mystery.

I repurchased it a number of years ago for a buck or two and found out that it wasnt nearly the wild ride I thought it was when I was at 13. I think I got rid of it again but can say it is NOT worth more than any other old paperback from the period.

Ha, I seem to remember I had a Zebra serial-killer mystery that had a knife slicing a strawberry. I think it was by O'Neil De Noux and the title was THE GRIM REAPER, but I don't see that cover anywhere after a breif search.