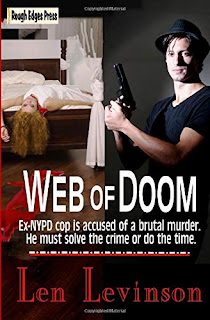 The first new novel by Len Levinson in twenty-some years, (not to mention the first published under his own name), Web Of Doom is courtesy Rough Edges Press, run by our good friend James Reasoner. I wasn’t even aware that Len was writing a new book, so a big thanks to James for sending me a copy for review. If anything Len proves that he hasn’t lost his touch in the past two decades since his last published work, turning in what is ostensibly a thriller, but one leavened with wacky characters and the occasional philosophical pondering.

Speaking of decades, Web Of Doom is the first of Len’s novels I’ve read that isn’t set in the ‘70s; it’s set in 1995, though to tell the truth I would’ve preferred if it had been set in the ‘70s. But Len’s goal is to focus on the anti-corruption sting which resulted in many New York cops losing their jobs: our protagonist (who also narrates the tale) being a case in point. His name is Patty Shapiro, and despite the fact that he’s a muscle-bound brawler with a broken nose, he comes off like Len’s typical protagonist – overly anxious, prone to reading the great classics, and doggedly determined. His name is cause for much discussion in the text, given that he is the product of Irish-Jewish parents.

One thing that hasn’t changed is the setting – Patty is from the Bronx, and the novel ranges all over Manhattan, with a brief trip upstate. There really isn’t much difference from the New York of Len’s ‘70s novels…given the setting, cell phones aren’t near as prevalent as today (in fact I don’t think they’re even mentioned), and Patty does his sleuthing via oldschool detective work instead of checking some damn database or something. However the sleaze and grit of those ‘70s joints is gone, and black characters are sometimes referred to as “African-Americans.”

The first quarter of the novel is very hardboiled and it seems evident Len is trying to stay true to the template: Patty is down and out, your typical grizzled narrator, and he’s offered a job by Tony Pass, his ex-partner on the force. Now working as a private eye, Patty is to break into a sleazy hotel room and take photos of a blonde bimbo named Christine Rutledge while she’s screwing another guy; Christine’s married, and the husband’s attorney (a cougar named Nadine Coleman) offers Shapiro a couple thousand bucks for the job. Christine is a notorious hussy but is trying to bilk her wealthy husband in court, so this incriminating evidence will put her in her place.

So it’s all very much out of Hardboiled 101, as is the “surprising” turn of events – when Patty, who learned how to pick locks while a cop, breaks into Christine’s hotel room for the photos, he finds Christine’s corpse on the bed. What is a bit unsuspected is that Patty calls the cops! Patty himself will soon wonder why he did this. Given his cred as a “dirty cop,” Patty is hassled by the cops throughout, and to tell the truth it gets to be a bit unbelievable. Patty is of course being framed for Christine’s murder, but he never knew her and he was offered the job by a lawyer, yet he’s arrested (a couple times) with the main charge being he’s a psycho killer who stalked her and murdered her. The argument is he’s a dirtbag ex-cop who was fired for corruption and now he gets his kicks via rape-murder. The fact that he’s cleared of the rape charge doesn’t help his case.

Len is almost as relentless as his protagonist in hewing to the hardboiled template – Patty goes through a succession of wild goose chases as he tries to clear his name. This even entails a part where he drives upstate and camps out in the woods in the desperate hope of cornering a suspect. But after all this the novel begins to open up a bit and becomes more like the Len Levinson sort of novel we know and love; Patty’s hitting on women, pondering his thoughts, and reading Crime And Punishment. Given that the book’s written in first-person, it at times comes off like Len speaking directly to us, and I have to confess I kept picturing Patty Shapiro as looking more like Len Levinson himself than the broken-nosed brawler Len had in mind for the character.

Patty bounces around a small cast of characters, with cougarish lawyer Nadine standing out most in the early pages. There’s also Flacco, a photographer who always wears mirrored shades and who serves as one of Patty’s informers. There’s also a scenery-chewing mob boss who was friends with Christine, and who hires Patty to find the real killer so that he and his Mafia pals can kill him. He funds Patty’s investigation but also threatens him a lot – ie “Find the killer or I’ll kill you” and the like – but it gets a bit old after a while.

I’d say that’s my main problem with Web Of Doom; it just sort of goes on a bit too long. Patty is caught in a metaphorical web as he strikes out on one lead after another; he desperately chases clue after clue and bullies witness after witness, but nothing comes out of anything and he’s always stuck at square one. There’s even a part where he flies around the country to question the various people who were staying at the hotel Christine was killed in, and it’s one “strike” after another. While the various one-off characters are memorable, the whole sequence comes off as unnecessary and should’ve been cut for a faster-moving tale.

But when Len gets away from the “hardboiled template” stuff, the characters breathe a bit more and it’s all more reminiscent of his funky-freaky novels of the ‘70s. This especially becomes apparent in Patty’s increasingly-frequent complaints and paranoid fantasies, not that this stops him from hitting on the occasional babe. Len doesn’t go for the full-bore sleaze as he did in his vintage yarns, leaving Patty’s conquests off-page for the most part. Late in the game he hooks up with a sexy neigbor in his apartment, and she turns out to be his main squeeze in the book. She’s another of Len’s memorable female characters, serving up impromptu psycho-analyses of Patty.

There isn’t much action per se, though Patty runs around a lot and gets in the occasional fistfight. The focus is more on his using his brains to figure out who murdered Christine. Len clearly met with some cops for research, as Patty occasionally informs us of the inner workings of the police world. He’s also a big believer in the mindset that if you keep searching for clues, something will eventually turn up. But as mentioned this does get to be a bit wearying after a while, as Patty seems to question a seemingly endless parade of witnesses. But the impression that Patty is caught in a “web of doom” is quite clear, even though I had a hard time believing he’d actually be convicted of killing Christine.

Overall I enjoyed Web Of Doom, and it’s great to see that Len is back to writing. Here’s hoping there will be more to come. How about a return of The Amazing Frapkin?
Posted by Joe Kenney at 6:30 AM

Thanks for the review, Joe. I’m always interested in your point of view because often I’m blinded by my own point of view. Your comments are very insightful as usual.