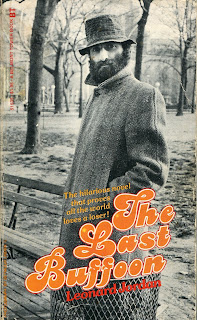 Back in 2005 I discovered this paperback original in a used bookstore -- a signed copy, at that. Only, it was signed "Leonard Levinson." This confused me at the time, given that the book was credited to Leonard Jordan. It was only later that I discovered that "Jordan" was a psuedonym of prolific writer Leonard Levinson, who among many, many other novels cranked out a few volumes of the always-entertaining Sharpshooter series.

Levinson is known for his series work, written under a host of psuedonyms, but the Jordan name was one he reserved for a handful of nongenre novels, spanning from the mid-1970s on up to The Last Buffoon, from 1980. When I first read the novel a few years ago I really enjoyed it; upon this re-reading, I loved it. Simply put, anyone who enjoys the men's adventure genre or the trashy paperback fiction of the 1970s must read this novel. Especially if like me you've often wondered, Who the hell writes this sort of trash? Levinson offers a first-rate glimpse into the zany life of a paperback writer living in the slummy New York City of the late 1970s.

And make no mistake, Levinson -- speaking here in the voice of his protagonist, Alexander Frapkin -- knows without question that he is writing trash. If you take a look at the cover, you'll note that Levinson is standing inside a trash bin. ("Cover photo posed by professional model," facetiously states the copyright page, but it's certainly Levinson himself; he looks exactly the same as how he describes Frapkin.) But Levinson knows what separates common trash from glorious trash. As he explains early in the narrative:

Besides, intellectuals have contempt for books like mine. They don't realize that the great archetypal hallucinations of our times are contained within so-called trashy books, while literary establishment authors like Updike, Barth, Roth -- that ilk -- are effete dilletantes who should be teaching lit courses in colleges, and in fact many of them are, the scumbags.

Levinson writes The Last Buffon in first-person present tense. We meet Frapkin as he is completing his latest novel, another entry in the Triggerman series, in which hero Johnny Ripelli battles the Mafia. As he's writing, Frapkin's editor calls to tell him to include a scene in the book where a helicopter attacks Ripelli, as this is the image he has commissioned from the cover artist; the editor also confirms that the story is taking place in Miami, and says that he'll have the artist add some palm trees into the drawing. All of this exactly as in the Levinson-penned Sharpshooter #5: Night of the Assassins. Levinson peppers The Last Buffoon with a host of in-jokes, referring to various series novels Frapkin has written, all of them spoofs of ones Levinson wrote in reality.

This is more of a goofy character piece than a plot-driven novel. Lots of stuff goes down in The Last Buffoon but there's no real plot development, which I guess was a nice change of pace for Levinson, given the plot-heavy basis of men's adventure novels. Instead we slum around with Frapkin as he works on his series fiction, gets married yet again (in a scheme worked out with his lawyer, Frapkin marries women who are about to lose their green cards in exchange for cash), does a lot of drugs, tries to hustle a film version of his best-selling porno novel, and even gets beaten up for his writing.

One could say this is a brave novel, because Levinson lets it all hang out. No detail is spared here, particularly when it comes to Frapkin's sexual activities, all of which occur while he is by himself. The idea is, he's as sleazy as the characters he writes about, and he'd be the first to admit it. His paranoia runs rampant and he deals with a wealth of worries throughout the novel, especially concerns over race riots.

After which Frapkin is even more paranoid, and vows to never put his real name on a book. His chance at a big break occurs toward the end of the novel when a pair of rapists are caught and tell the police they got the idea from a novel they read. You guessed it, the novel was another of Frapkin's. The media exploits the story and sales of the book go through the roof -- all of Frapkin's various novels start selling like hot cakes -- but due to his beating Frapkin instead panics and goes into hiding, coming out long after the media around the event has died down.

For me one of Levinson's greatest strengths is his ability to bring to life any character, no matter how minor. Characters in his novels always jump off the page and The Last Buffoon is no exception. It's like all of his characters have lives outside of the book and are just making guest appearances. Just a few of them here are Frapkin's latest wife, a feisty beauty who determines to clean up Frapkin's pigsty of an apartment; Frapkin's homosexual lawyer who, after spotting Frapkin in a gay bar (where Frapkin was only using the phone) starts making passes at him; Frapkin's drug connection, who accepts Frapkin's trashy novels as downpayment on grass; and a plethora of others, including a crabby socialite who hosts religious gurus in his penthouse suite. Even incredibly minor characters spring to life, like a grammar-focused sales associate Frapkin encounters while shopping.

Perhaps the most enjoyable element though is how The Last Buffoon shows the mind of a writer at work. Frapkin works out his problems and frustrations in his writing; this is most effectively presented when he writes that trio of mobsters who beat him into the Triggerman novel he's writing, having Johnny Ripelli blow all three of them away. In fact anyone who ticks off Frapkin may soon find their way into one of his novels, their fictional analogues suffering some horrible fate.

Frapkin has more of an uphill battle with his publishers, though, as they refuse to pay him for his manuscripts, let alone any royalties he's due. The Last Buffoon ends with Frapkin threatening the life of one publisher, only to have another fold beneath him as he's turning in a brutal cop manuscript (clearly based on the characters Ryker and Super Cop Joe Blaze, both series which Levinson contributed to). But no matter, as there's always the pretty Japanese girl across the street to spy on...

Finally, the novel offers a great view of late 1970s New York City, a long-gone sleazepit of 42nd Street porno theaters and rampant crime. Again, this book's highly recommended for connoisseurs of trash fiction and men's adventure novels, particularly the more lurid 1970s incarnation of the genre. It's a lot of fun, moves at a snappy pace, and it's well written to boot. In a way The Last Buffoon reminds me of William Kotzwinkle's The Fan Man in that both novels are about eternal optimists who are even more crazy than the crazy characters they meet. But whereas The Fan Man attained a sort of cult fame, The Last Buffoon went unnoticed, and that's a shame.

I'll be reviewing a lot more of Levinson's work here in future, from his contribution to the Mace series (another one spoofed in The Last Buffoon), to his longrunning work on the crazy Butler series, to the other nongenre novels he published under the Jordan psuedonym. I also intend to track down copies of his Rat Bastards books (he wrote all of them under the name John Mackie, but they're all now available as ebooks under Levinson's own name) as well as his Sergeant series (published under the psuedonym Gordon Davis), which I haven't read since I was a kid. You can consider me a fan of his work.

Since re-reading The Last Buffoon, I've been lucky enough to get in touch with Leonard Levinson himself. He's still writing, and he was kind enough to give me some background information on many of his novels, including the fact that The Last Buffoon was twice optioned for the movies, though unfortunately nothing came of it. Throughout our conversation he expressed amazement that he has readers out there, particularly for some of the series novels he wrote. (He was shocked that the Butler novels for example go for such high dollars on the used-book market.) He's also written a piece on his life as a writer, complete with a list of the 80-some books he's published under various psuedonyms, which will appear in an upcoming issue of Justin Marriott's Paperback Fanatic.
Posted by Joe Kenney at 6:30 AM

This book sounds beyond awesome. There is so much fanfare for the pulp era, when will paperback era start getting it's conventions?

Great review as always. But what's this "crazy Butler series" you speak of? My interest always perks when I read the word "crazy."

Thanks for the comments. Tim, I'd love to see a paperback convention.

Cy, the Butler series is apparently a spoof of James Bond and other spy fictions. The protagonist, Butler, is always having bad luck with women and getting sent on bizarre missions. It also has more of a left wing nature than other books in the genre. Levinson told me that an editor at Leisure Books once told him that a co-worker there had complained that the Butler series was "the Communist manifesto."

Fantastic book find, Joe. The whole meta-ness of this blows my mind: A book by a real pulp writer about a fictional pulp writer reviewed on a pulp blog. Great stuff.

Glad to see you putting out the good reviews here and excited that you are now writing for the Fanatic.

Based on your recommendation, I have ordered a copy of THE LAST BUFFOON. (I was fortunate to find a used-but-very-good copy for around $11.00.) I'll give you my two-cents worth on it after I read it.

Fixer, thanks a lot for the comment, as well as the others you've recently left on the blog. Glad you ordered a copy of The Last Buffoon, and I'm sure you'll enjoy it!

Thank YOU for creating and maintaining this blog.

I just finished reading THE LAST BUFFOON. To call it an entertaining laugh riot would be an understatement. Parts of it read like a prose version of the underground comix I devoured back in the 1970s. Great stuff!!!!

I just read this after your recommendation. I'd never heard of it before, and I'm glad I read it. It is the best book I've read about the what it means to live the life of a writer of "mercantile" fiction. Another great one about being a commercial writer was Aunt Julia and the Scriptwriter by Mario Vargas Llosa, in which Pedro Camacho is a hugely prolific writer of Bolivian radionovela scripts. He goes to similar manic lengths for his art. Similar to Len's book, the fictional world and reality get mixed up as the writer goes to extreme lengths to practice their art.
I have to thank you for your dedication to actually writing about the content of the books and not just putting up cover scans. You are one of the few who gets the likes of Robbins, Susann and Hirschfeld et al. I visit your blog regularly and learn something new each time.

Michael, thanks a lot for the comment, and I'm really glad you enjoyed "The Last Buffoon." Also, thanks for the kind words about the blog. Yes, I do take my trash seriously! I think it's a shame so many of these novels are forgotten today.

Also, thanks for the comment on "Aunt Julia and the Scriptwriter;" I'd never heard of that one.