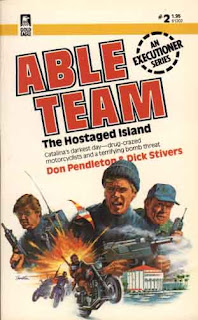 These early Gold Eagle novels are turning out to be much better than I expected. This one in particular comes off like an action-packed B movie, with an army of bikers taking over the peaceful island of Catalina, right off the California coastline. The three-man Able Team is called in to take care of the problem. Or, as team leader Carl Lyons succinctly puts it: "Kill them all."

The novel plays out very much like the '70s incarnation of men's adventure novels, with a lurid vibe and pulpish plot and villains. In other words, the imprint hasn't yet devolved into the nuke-of-the-month/Team America jingoism of later years. It does though uphold the Gold Eagle philosophy of, "Everything will be fine as long as you have a gun." It also makes cursory mention of the right wing bias that would also become so prevalent in later Gold Eagle offerings; when helicoptering to the island, Able Team is informed by their boss Hal Brognola that the civil rights of the bikers have been "suspended." IE, no need to worry about law and order or prosecution; just kill the bastards.

The writing however is quite good. The cover credits the book to Don Pendleton (who had nothing to do with it) and house name Dick Stivers, but the copyright page of the book credits authors Norman Winski and LR Payne. Winski published several novels over the years, but Payne is a mystery; the only credits to his name are the first three Able Team novels. I suspect the name was the psuedonym of a Gold Eagle editor who polished these early manuscripts to better fit the burgeoning Gold Eagle house style; what makes me suspect this is the last chapter of the novel, which has nothing to do with what came before, and seems to be written by a different author. In it Able Team basically sits around and waits to meet up with Mack Bolan. It just struck me as something an editor might add to the book to remind readers that the Able Team boys are part of a larger universe.

The takeover of Catalina is taut and well-rendered. The bikers are all well armed and, in a prefigure of Chuck Norris's Invasion USA, infiltrate the island in the dead of night and seal it off from the rest of the world. What makes the novel fun though is that the bikers act like bikers, and not like a commando force; most of them would rather tear across the streets on their choppers, get drunk, get high, and mess around with the local women. After killing the sheriff and making a call to the governor with their demands, the bikers imprison the island residents in a community center and bide their time until their demands are met.

A few islanders manage to escape and arm themselves, killing a few bikers and finding cover. But the brunt of the rescue of course goes to Able Team, who are quickly called into action, as the government wants to keep the takeover a secret. Winski does a fine job of juggling the three characters, meaning that the novel doesn't come off solely focusing on just one of them. Also, there's great rapport between the three, including a lot of enjoyable banter, even while the bullets are flying. This again lends the novel a B movie feel.

The Gold Eagle focus on guns also factors in when Able Team is equipped with their firepower for the mission. Their gun supplier lays out all of the equipment, going on and on about each piece. Literally paragraph after paragraph of firearm detail that will likely have gun-porn enthusiasts reaching for the Lubriderm. And of course following the old "rifle hanging on the wall" dictum of Chekhov, each firearm is shown in action as the novel unfolds. Winski excels in the action scenes, pouring on the graphic violence and gore.

The Hostaged Island has the one plot and follows it through to the end. Since the novel isn't long, it all works out perfectly. We know of course that Able Team will survive the mission, so Winksi plays up some truly dramatic scenes with the island residents and their constant danger. He even works in some great stuff like when the bikers keep getting nailed by this secret "commando team" (Able Team of course striking from and returning to the shadows) and so decide to take out their rage on the residents. This involves a plan to basically spray everyone in the community center with gasoline and set them on fire. Winski provides excellent revenge material as well; he makes these bikers truly evil, and all of them get their comeuppance in gory and spectacular ways.

I think this was Winski's only Able Team novel, but his contribution here was enjoyable enough that I'll look out for more of his stuff, in particular his three-volume Hitman series, which sounds like a lot of fun.
Posted by Joe Kenney at 6:30 AM

Thanks for the link! :) I'm probably gonna have to seek this book out... I'm a biker-book fanatic, anyway (just finished reading an autobiography by the president of the Mongols), and if this is the guy who wrote the Hitman books, it's gotta be top-notch trash! That first Hitman book was incredibly goofy, but also one of the most entertaining lunkheaded things I ever read... :)

I was also really pleased with such a great book so early on. Doubly so since Phoenix Force really didn't pick up in terms of actiony goodness until a few books further into the run.