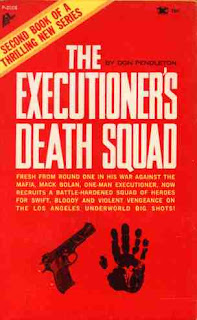 Picking up not long after the events in #1: War Against the Mafia, Death Squad finds Mack "Executioner" Bolan heading to the West Coast after blitzing the Mafia in Massachusetts. The mob's put a price on Bolan's head, so he's on the run, in hiding. He's even gone so far as to dye his hair blonde. On top of that his events in the previous volume have already made him somewhat legendary.

Hooking up with George Zitka, an old pal from 'Nam, Bolan heeds Zitka's advice and realizes that it might be a smart idea to put together a team to take on the Mafia. After all, Bolan's just one man and the mob is legion. The two men go about the country putting together a "death squad" comprised of former 'Nam hardassess, all of whom worked with Bolan during the war. In total there are nine of them, with Bolan making the squad an even ten, and Pendleton shows the mastery of his economical writing here, bringing to life each and every member of the squad with only a paragraph or two of introduction.

But that is the problem with Death Squad. There are just too many characters here. Bolan suffers as a result; there are only three or so scenes from his perspective. Pendleton spends the 180 pages hopscotching among the perspectives of his unwieldy cast of characters; he even muddies the water further by introducing yet more characters, LAPD cops tasked with bringing Bolan in. One of these cops is a young hotshot named Carl Lyons, fated to one day become a member of Able Team. (So too are Gadgets Schwartz and Pol Blancanales, signed up here as members of Bolan's death squad; the three characters do not share a scene in the novel.)

The brutal, taut feel of War Against the Mafia is lost as a result of the swarm of characters. Death Squad starts off pretty great, though, with Bolan showing up at Zitka's place just in time to blow away a pair of mob goons who happen to be staking the place out, all while a "mod party" rages at the apartment's swimming pool. It continues on in an accelerated, well-done pace as the members of the death squad are assembled and devote themselves to Bolan's cause. There's even a touching moment -- again delivered without the maudlin, sappy flair that would be mandatory today -- where the men realize that Bolan's reasons for this crusade are personal, not due to money, and so each of them put a share of their pay into "the kitty." (Ie the savings stash to continue the war.)

The squad sets its sights on two LA-based mobsters. The funny part is, neither of them are shown as being truly "bad." The first makes his money by hiring unknown rock bands for little pay and releasing their cover versions of famous songs. (The bastard!!) The second guy...well to tell the truth, I couldn't even tell what he did, though I think it was briefly mentioned at one point that he had his hand in drug dealing and prostitution. But regardless Bolan's teams unleash their 'Nam-trained fury on these poor saps.

The action scenes also suffer this time out. Pendleton writes the novel as if it's a pice of military fiction. Rather than the close-quarters, personal nature of War Against the Mafia, Death Squad is comprised of sort of analytically-related snatches of combat narrative. What I'm trying to say is, the personal feel is lost. Instead, Bolan and his team relay military jargon to one another via walkie-talkie and a lot of the action is rendered via summary or flashback. I'm certain this was Pendleton's intention -- indeed, the entire thrust of the novel is a group of 'Nam soldiers deploying military tactics on the mob -- but for me it just took away from the nature of the series. Perhaps it would've worked better if the novel was longer.

Pendleton must've felt the same way, though, as he even has Bolan questioning his decision to form a squad, late in the novel. But it's a moot point: in an unintentionally funny denoument, the squad pretty much bites the dust. I mean, these guys couldn't even make it through one novel. What makes it even more ironic is the nature of the villains this time out; the climax, while entertaining, still just features a few Mafia goons in a fortress-like building. It's the sort of thing The Sharpshooter could take care of in his sleep.

The mythology of the series is still being worked out here. Bolan has yet to acquire the accoutrements that became standards later on: no Automag, no blacksuit, no War Wagon. But then, Bolan really isn't that strong of a character in Death Squad, lost amid the shuffle of too many competing characters, many of whom (like Juan "Flower Child" Andromede) are more colorful than Bolan himself. Thankfully Bolan returned to his lone wolf status in the next volume.
Posted by Joe Kenney at 6:30 AM

I agree with your final statement (well, I agree with the review as a whole, as well). Battle Mask is where I think the Bolan mythology really begins to take off; with his new face, the Mafia and the cops aren't able to track him, and since Bolan pretty much kills any mafiosi who figures out who he is, he slips into this legendary "boogeyman" status that carries through the rest of the War Against the Mafia series.

Death Squad is interesting, but flawed. I do think at one point they tried to release a Death Squad series, featuring all the members of the team but during their Vietnam years. Or am I mis-remembering this?

Nice to see you reviewing the older Bolans. Lots of gratuitous sex, violence, and all around adventure.

I wish more of the squad had survived. At least for several more books anyway. More difficult to write perhaps, but squads have an interesting appeal for me. Depends on how it's handled of course.

I've started reading the original The Executioner series again after stumbling across this website. I originally read these books back in high school in the early 80s, so reading them again has brought back a fond feeling of nostalgia.

I liked Death Squad more than War Against the Mafia. I thought the story and writing were better and there was more action. I agree there were too many characters. In such a short book it's hard to make a personal connection to all of the characters. I think the final showdown lacked the emotional punch it could have had if more time had been spent developing them. But overall, I really liked this book.