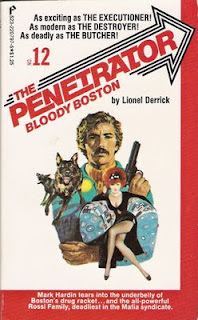 Chet Cunningham delivers another rough and wild volume of the The Penetrator that's light on plot but heavy on sadism and gore. Once again Cunningham's version of Mark "Penetrator" Hardin is more vicious than the villains he fights, and the tale -- about a former college pal of Hardin's who has been replaced by a mob lookalike -- is just a convenient framework for Cunningham to depict countless scenes of Hardin brutally torturing various Mafia henchmen before killing them in novel ways. In other words, the book's pretty great.

The setting this time out is Boston, not that the reader gets much of a feel for the place. Instead, the focus is on carnage; Bloody Boston opens with a horrific scene in which Mark Hardin, our friggin' hero, tortures and mutilates a mob goon for intel. I mean, I started to feel bad for the goon. But Hardin shrugs it off, getting the information he needs; his schooltime chum, Tony Rossi, has called Mark for his help.

Tony Rossi is the son of a Boston Mafioso (I wonder if he's any relation to Bruno Rossi??) but really isn't involved with the family. Instead, Tony's been in the Amazon for the past few years; a researcher, he was kidnapped by a local tribe and held hostage. Escaping to the US, Tony found that a stand-in was posing as "Tony Rossi," and his wife and son were held captive in a mob stronghold. His father, ailing and near death, has disappeared.

Why exactly Tony calls Hardin is never made clear; Tony has no idea that Hardin is the Penetrator. Like I said, it's all immaterial, really. Hardin's going to torture and butcher a few people, that's all there is to it. In one of Chet Cunningham's patented WTF? scenes, Hardin answers a knock at their hotel door only to find a beautiful gal standing out there, one who asks if he is Mark Hardin, then produces a revolver and takes a shot at him. Saved of course by his spry reflexes, Hardin disarms the lady, only to discover it's Tony's sister Angie. Having received a panicked call from Tony, Angie came here to Boston, bought a gun, and, despite her panicking, apparently was able to remember not only Hardin's name but also the name of their hotel -- all while forgetting that Tony said that Hardin was helping him. Pretty dumb.

Anyway Angie's presence sets the stage for lots of sexual bantering between her and Hardin. The three work together with Hardin of course doing the dirty work himself. There are some fun sequences in here, like when Hardin infiltrates the Rossi mansion and poses as a loudmouthed Mafioso. There's another fun scene where he portrays a short-tempered repairman; this scene culminates in something out of a 1930s cliffhanger, with Hardin and Tony stuck in a locked cell that slowly fills with poison gas, all while a voice on a speaker tells them they're about to die.

I lost track of the number of mobsters Hardin wastes. Cunningham must've been in one nasty mood, because these poor Boston mobsters suffer like hell. There's a particularly grisly scene where Hardin sneaks on a mob-rented fishing boat; Hardin takes out the crew and mauls the mobster and tosses him into the ocean, putting a massive hook into the guy and pulling him along behind the boat. After the mobster finally spews the desired info, Hardin thanks him kindly and then shoots him in the face.

Just to give a taste of what I'm talking about, check out this scene, where Hardin has just knocked out a guard in a stairwell with his poison dart gun. Hardin, not sure if the man was Mafia or not, only hit him with a knockout dose. After confirming that the man is indeed Mafia, Hardin...well, just read for yourself:

Mark tensed his right hand and slammed the side of it hard against the underside of the hoodlum's nose. The Penetrator felt the small bones in back of the nose crush, knew that deadly splinters of bone and cartilage were being driven backwards, slanting through pulpy areas and directly into the Mafioso's brain. The body trembled; then a strong gush of air flowed from the man's mouth and at the same time Mark smelled the stench of feces as the involuntary muscles quite working. That was one hoodlum who had shit his pants for the last time.

That paragraph could've come out of Blood Bath. The only difference between the Penetrator and the Sharpshooter or the Marksman is that Hardin occasionally questions the rightness of his brutal actions. But of course he always convinces himself that he is just. Cunningham even has Hardin's pal Tony gradually become concerned about Hardin; there are a few scenes here where Tony will just gape at Hardin after he's performed the latest bit of sadism.

However this is merely Cunningham setting us up. Indeed he is so focused on sequences of graphic violence that he loses the main plot of the book. I spent the entire novel waiting to see Tony go head-to-head with the stand-in who'd replaced him, but we never even get to see the guy. Instead Cunningham has Hardin and Tony capture the Mafioso behind the plot, and Tony goes full-on insane on the bastard, giving the guy a stomping that would make even Gannon puke. I'm talking total demolition, complete with the mobster's eyeballs popping out and everything!

Yeah, Bloody Boston is certainly something else. Manor Books and the aforementioned Sharpshooter and Marksman series get all the credit for their graphically-violent sleaze level, but Chet Cunningham's Penetrator is right down there in the gore with them.
Posted by Joe Kenney at 6:30 AM

"He shit his pants for the last time." Good lord, that's as good as the line out of that Phoenix novel! :) It's been a few months since I read a Penetrator, but these reviews are making me glad I got obsessed and hunted 'em all down and bought 'em... looks like I've got a ton of classic stuff waiting for me. :) Keep up the good work!