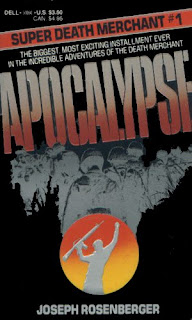 I'm jumping all over the place in the Death Merchant series. After reading an early volume and then one from the middle of the run, I figured I'd see how our psychotic friend Richard "Death Merchant" Camellion ended up at the end of the series. Apocalypse, the one and only "Super Death Merchant," is the penultimate volume of the Death Merchant series, which, including this 400-page monstrosity, amounts to a total of 71 books...all of them written by Joseph Rosenberger; you have to respect the guy just a little for accomplishing such a feat.

Believe it or not, Apocalypse actually lives up to its title. This book has all the makings of a finale for the series, ending with hundreds of thousands dead in the Middle East and nuclear war declared between the US and USSR; but it actually takes place before Death Merchant #71: The Greenland Mystery (which apparently brushes aside the whole nuclear war ramifications of this volume). Actually it appears to me that Rosenberger was attempting a retcon of his character, as for the majority of the book, Apocalypse bears little resemblance to the earlier Death Merchant novels I've read.

For one, Camellion isn't the master of disguise he once was. Also, no mention of his reading "auras" and whatnot, and the Cosmic Lord of Death is given only minor mention. The first third of the novel comes off more like a Robert Ludlum spy story, with Camellion arriving in Greece and meeting with a variety of contacts.

The Soviets have kidnapped a Greek scientist who has supposedly cracked the mystery behind one of Tesla's many inventions -- namely, the control of the world's weather patterns. Surrounded by Spetsnaz commandos and KGB agents on one of the countless islands outside the Greece mainland, the scientist works against his will developing this ultimate weapon. Of course the Russians plan to use it against the US, without any concern over resultant damage to the rest of the world.

The first few hundred pages of Apocalypse are a slow-going affair. Rosenberger either recently visited Greece or consulted a mountain of travel brochures, as we get unending detail about Greece, its people, and their customs. Also endless meetings of various secret agents with lots of acronyms thrown around. The most shocking indication that Apocalypse is a "different" sort of Death Merchant is that there's no action scene until page 120! Even more shocking, there's an actual, bona fide sex scene before the action scene...!

The scene is certainly explicit, at least as far as Rosenberger is concerned, complete with graphic detail and dialog from the lady in question ("Do it! Do it! Do it to me!"). I couldn't believe it. Perhaps Rosenberger's new publisher Dell requested that he sex up the proceedings? Who knows. Anyway, the lady is Melina, a Greek agent who, moments after meeting Camellion, demands that they go to bed together. Weird and gratuitous stuff for sure. Rosenberger has a habit of using his books as forums for his own political and personal views, but in Apocalypse he even dispenses his own little nuggets of wisdom about women. For example:

The Death Merchant had also shared enough beds with the opposite sex to know that there were three kinds of women. There were those who appeared as cold as a dead fish but became wildcats in bed. Other women looked and acted sexy but were as frigid as a three-thousand-year-old statue. And the last category, were those women who exuded sex and, later in bed, proved it by having orgasms almost as fast as slugs can spit from the muzzle of a MAC-Ingram submachine gun!

There aren't too many authors who could (or would) compare a female orgasm to a machine gun.

As mentioned, the action doesn't even start until over a hundred pages in. Camellion is jumped by a group of Spetsnaz agents, and here the Rosenberger of yore returns. Every bullet's path is documented, every moment of the fight scene is detailed. He also indulges his bizarre penchant of naming each and every minor character Camellion kills.

From there the novel begins to resemble a regular Death Merchant novel; Camellion and his comrades engage in several more battles, in particular a very well done sequence where they are attacked in a safe house in the woods. This scene becomes grisly and darkly humorous when Camellion appropriates an armored truck after blasting its occupants to hell; he and his fellow fighters have to sit in the blood and on the destroyed bodies as they make their escape.

Apocalypse is 400 pages, and that's around 200 pages too long. After a brief tenure in London, Camellion sneaks into the USSR, this time posing as a scientist, complete with yet another female associate accompanying him. Remarkably, this involves another sex scene, though not as explicit as the one before.

The material here is pretty much a carbon copy of the material in Greece, with Camellion meeting inside agents; once again Camellion and his comrades are surprise-attacked in a safe house and must blast their way out. But Rosenberger delivers another good escape sequence, with Camellion commandeering a Russian plane and taking off. His certainty that Soviet red tape will prevent a hasty pursuit is proven correct; more opportunity for Rosenberger to rant against the idiocy of the "pig farmers."

As has been the case in the previous Death Merchants I've read, Apocalypse ends with Camellion and a team of commandos launching an assault against the enemy's fortress. This sequence, again well-done and gory, comes off like military fiction, with Camellion the member of a large group of British commandos and US Delta Force. Meanwhile the Russians have fired off the weather control device, which results in a hundred thousand dead in Turkey and more in Syria. After the lengthy battle sequence, Camellion frees the scientist, smashes the weather device, and escapes on a nuclear sub.

Here the novel races to its conclusion as Rosenberger synopsizes ensuing events. The world is of course outraged over Russia's actions. The USSR meanwhile does not comment. After an endless scene in which President Reagan renounces the Soviets on TV, complete with his showing documentation to prove their guilt, Camellion learns that nuclear war has been declared. Given that he's on a nuclear sub, he won't be headed to London for r'n'r, after all. Instead, the sub has been given battle orders.

Apocalypse ends with Camellion happy that the world is about to engage in nuclear war. He realizes he will finally see his dream come true: the USSR blasted into a radioactive wasteland. What a strange outlook for the hero of an action series. Or, for that matter, the author of an action series.

But as mentioned, this plot development was ignored in the 71st and final volume of Death Merchant -- consulting my copy of Greenland Mystery, which I'll read eventually, I see that the events of Apocalypse are relegated to a tiny footnote on page 152, which makes no mention of the declared nuclear war. Either Rosenberger changed his mind, or Dell didn't feel like turning the series into a post-nuke pulp...or, more likely, they just wanted to cancel it.
Posted by Joe Kenney at 6:30 AM

I never could finish this one. Always got stuck at the begining of this. I imagine Rosenberger was really crushed when Dell pulled the plug. Still like to know how he freed the rights from Pinnacle´s bancrupty mess.

I should have known he used Tesla somewhere :-). Just these days I marveled how deeply ingrained Tesla has become in pop-culture, but only in recent years. From Mythbusters to Randisi´s Gunsmith, he seems to be everywhere.

Yeah, this was pretty much a great wrap-up to the series -- the apocalypse Mama Camellion's blue-eyed boy always dreamed of -- and then they just sort of tacked on another adventure.

I personally like to imagine the Greenland adventure happened first, and that The Cosmic Lord of Death's universe ended here.

I kind of wish that Rosenberger HAD turned the series into a post-nuke pulp sort of thing, with Camellion living in a nuked hell of mutated pig farmers...even taking it all further into the metaphysical realm with the Death Merchant actually becoming the earthly vassal of the Cosmic Lord of Death. But even then it would probably just be the same old stuff -- endless battle scenes followed by endless diatribes.

71 books....hundreds if not thousands of gunfights, many of them indoors...and yet, The Death Merchant never suffers from hearing loss. Amazing...