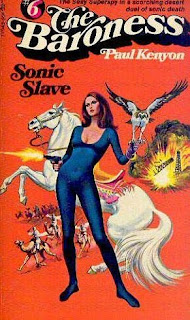 The previous volume of the Baroness series left me cold; I found the Baroness herself pretty annoying, getting herself and her teammates in mortal danger due to nothing more than her ego and recklessness. Also the spy-fy aspect of the series was beginning to wear thin, with fancy gadgets described ad naseum -- not to mention the pages-filling explicit sex scenes, which by this point were too much of a good thing. So what a relief it is that Sonic Slave (now there's a name for an '80s metal band) is an improvement in every way over Operation Doomsday.

The focus this time out is moreso on plot and scene-setting. In fact there's hardly any action until the final third, and I was shocked to discover that the Baroness only has sex twice in the novel, first in the opening pages with a millionaire horse-breeder, and toward the end with the leader of the rebel faction of a fictional Middle Eastern country. I've noticed this is yet another pattern of the series; the Baroness will have sex early on in her "regular" life as Penelope St. John-Orsini, and again later on, while on a mission, in her guise as the Baroness. And I'm also happy to note that for once the Baroness doesn't pull any stupid moves while on this mission -- in the past she's always gone off on her own for some arrogant reason, only to be caught. She of course works solo at times in Sonic Slave, but it's for necessary reasons.

After outbidding a group of wealthy Japanese (at an exorbitant price) for a horse, the Baroness frolicks in the hay with the aformentioned millionaire. This is the first of two scenes in which the Baroness has sex while horses are around, her sexual prowess serving to shall we say "titillate" the beasts in both instances. Honestly, I'm not sure what Paul Kenyon (aka Donald Moffitt) was going for with this. But, as has happened in every previous volume of the series, as soon as she's finished having sex the Baroness gets a call from her handler, Coin, and races off for her next mission. I've said it before, the Baroness series is more repetitive than most men's adventure series, and I wonder how a different "Paul Kenyon" might've shaken things up.

The threat this time is the power-crazed Emir of a small patch of sand in the Middle East. The Emir likes to torture his subjects, hacking off their bodyparts and feeding them to his birds. The bigger threat however is Octave Le Sourd, a French alchemist of sound who has developed a sort of sonic attack method which renders flesh into jelly. The Emir has been using the sound cannons on surrounding villages, decimating people in horrendous ways. Posing as her usual glamorous, world-traveling self, the Baroness "visits" the Emir with the cover story of looking to breed with some of his fine horse stock -- the opening bit of the Baroness outbidding the Japanese (which has made world news) being used to good purpose here.

Kenyon brings to life the exotic world of the Emir's palace, with the Baroness and only two of her teammates living in luxuriously-appointed suites while the rest of her team pose as archeologists, digging in the desert across the border. For once the team actually comes off like a team. The Baroness finds herself drawn to the strange Le Sourd, who provides her with a variety of tours. She also successfully fends off the Emir, who has set his depraved sights on her.

There are some brutal sequences in Sonic Slave. In particular a scene midway through where the Baroness goes on a hunting trip with the Emir and his Arab colleagues; the game they hunt is the downtrodden prisoners from the Emir's jails. Kenyon shows the Baroness's noble spirit when, able to get away from her Emir-appointed watchdogs during the hunt, she saves one of the prisoners (who of course turns out to be a good looking guy -- indeed the rebel leader mentioned above), killing a group of Arabs with her bare hands.

As expected the Baroness is uncovered, but this time out it goes down in a novel way. Finding out that her cover's been blown, she escapes into the palace wearing a wisp of a nightgown made of spy-fy fiber technology. Long story short, it culminates in the Baroness hanging nude from the palace ceiling and sneaking into the Emir's harem of equally-nude women. But despite it all she's still caught, ending up in a contraption straight out of Goldfinger where she's strapped onto a torture device outfitted with a sonic beam that threatens her womanhood.

Kenyon's writing is a step or two above the men's adventure norm, with great scene-setting and description. He also excels in the action scenes; the finale, where all hell breaks loose as the Baroness and her team take on the Emir's men in the desert, is very well done. But again it's in the more intimate, close-quarter sections where Kenyon shines, with the Baroness taking on attackers by herself, usually bare-handed.

Hector Garrido's covers are usually excellent, but I find this one a bit chaotic. It's interesting though that he always has the Baroness wearing the same skintight black costume, when she wears no such costume in the series itself. In fact, she's usually wearing nothing at all -- no wonder Harold Robbins wanted to buy the film rights to the series.
Posted by Joe Kenney at 6:30 AM

There is a Baroness Yahoo group for anyone interested.

This is a new one to me though as I've never found it used anywhere (outside of some pricy internet editions).

Cool review. Hope you don't mind that I referenced it in mine at http://a60books.blogspot.ie/2016/07/the-baroness-6-sonic-slave-paul-kenyon.html

Enjoyed your review. One small error:the Baroness is "Coin". Her handler is "Key".