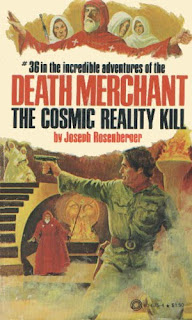 Death Merchant #2: Operation Overkill is the earliest volume of the series I currently have; this 36th volume is the latest. Finding that earlier volume to lack the insanity the Death Merchant series is known for, I decided to jump ahead and check out a later volume. Usually I try to read these series in order, but ultimately it makes little difference, as each of them (with a few exceptions) are usually intended to be read as stand-alone adventures.

As expected, The Cosmic Reality Kill shows a Joseph Rosenberger more comfortable with his violent creation; little wonder, given that this volume was published seven years after Operation Overkill. That earlier volume showed little of the crazed shenanigans Rosenberger is known for, coming off like just another entry in Pinnacle's endless line of men's adventure books. But here we have the metaphysical/cosmic/nutjob overtones that fans of Rosenberger demand. But what's strange is, despite all of this...Rosenberger's writing here is actually better than in that previous volume. I figured as the years progressed he'd start churning out action-heavy junk like Mace, but instead he only places a few action scenes in this novel, and overall his writing is stronger.

I knew I was in for a good time when I saw the back-cover blurb: "Gnostics and Guns." The first page of the book was also promising, where Rosenberger thanks the publishers of the Principia Discordia for allowing him to quote snatches of the text. As a longtime fan of Shea and Wilson's Illuminatus!, I was familiar with the Principia and couldn't believe I was seeing it mentioned in a men's adventure novel...one written by a (supposedly) right wing-nutjob of an author, at that. I'm sort of an armchair researcher of comparitive religion, so The Cosmic Reality Kill appealed to me in every way: in it Richard "Death Merchant" Camellion tasks himself with killing Reverend Hannibal Frimm, "His Oneness and Onlyness," head of the Cosmic Reality Church, insane leader of a brainwashed legion of followers who spread across the nation.

Tapping right into the then-current Jim Jones scandal, the novel operates on America's sudden fear of religious cults. Frimm has amassed so many followers that he has camps spread across the US; he runs the Church from his base in Colorado Springs. His followers come from all walks of life and the Church's religion is an amalgam of Jim Jones's warped Christianity and the basic tenets of Scientology. But as usual with these sorts of novels, Rosenberger gives no reason why anyone would so willingly join the Church -- they must live in shacks, give away all their possessions, sex is basically forbidden (therefore, none of the sex-worship of, say, Shamballah, and more's the pity), and life is relegated to work on the land and worship. But then, people join such religions in the real world every day, so I guess Rosenberger doesn't need to give a reason, after all.

Frimm has his own network of security, headed by Brother Sesson, who considers himself the Himmler to Frimm's Hitler. Sesson's men are kids, really, untrained youths barely out of their teens who roam the grounds with machine guns, enforcing order. However the guns have concerned the government, who have infiltrated a few undercover agents. These agents have all ended up missing (melted away in Frimm's "Disintigrating Chambers").

When Camellion finds out that one of his old friends, a CIA-trained cult victim deprogrammer, has also gone missing while investigating the Church, he determines to kill Frimm and wipe out his organization. He's so pissed that he's going to do it on his own; this isn't a mission the CIA has hired him for, though the Agency is kind enough to loan an "off duty" agent to help him out. In a chilling moment, the Death Merchant determines to not only kill Frimm but all of his followers. Rosenberger, obviously realizing this would mean Camellion would become a mass-murderer, thankfully brushes this over as the novel continues.

The novel opens with Camellion scouting out a Church camp (in Fort Worth, Texas!). For some bizarre, unstated reason he wears a latex alien mask. After being discovered, Camellion blows away several "Frimmies," men and women alike. From there the novel settles into the same pace as Operation Overkill, with an action scene scattered here and there, but mostly Camellion doing some research and biding his time until the inevitable final assault on Frimm's headquarters. After an endless car chase outside Colorado Springs, Camellion hooks up with his CIA contact, Linders; together with Linders's girlfriend Janet they travel around in an RV. Throughout the novel Camellion's disguised as an old man, with Linders posing as his son and Janet as his daughter-in-law.

As Rosenberger is apparently known for, The Cosmic Reality Kill is filled with the author's own views, spouted from the mouths of his characters. Camellion hates religion and informs Linders and Janet on all of its negative aspects. Linders for his part is the guy who mentions the Principia Discordia, though oddly Rosenberger has it that Linders is making it up as he goes along -- a spoof of religion that has Janet in particular laughing until she cries, though I assumed she must've just been high. Speaking of Janet, Camellion spends the majority of the novel admiring her "female curves" as they travel along in the motor home -- that is, when he isn't telling her to fry him up a steak. (Seriously!)

The climax is well-rendered and gory. Realizing he's been used by the CIA to get a free mission out of him, Camellion turns the tables and has Linders call in a team of Black Berets for the final assault, all of it on the Agency's bill. They go in with tons of gear, helicopters that blast holographic images, and a few batches of LSD with which to spike the camp's water supply.

Camellion -- still dressed as an old man -- unleashes a host of weaponry here, including the Automag favored by the Executioner. But, again as in Operation Overkill, Frimm's soldiers come off as little competition for Camellion and the team of Black Berets. As mentioned, they're really just kids, so there's a grim, unsettling tone to the finale, as Camellion and team take special relish in blowing away Frimmie after Frimmie, Rosenberger always mentioning each of them by name, as well as their age, as if rubbing it in.

As for Camellion the man, Rosenberger still only yields few details, keeping the character a cipher. We learn that he likes steaks, for one. Also, he eats sardines with banana jello...! Camellion makes a few mentions of "The Cosmic Lord of Death," whom he apparently serves; it's his self-vowed duty to kill those who need to be killed in order to balance the cosmic scheme. He can see "auras;" he knows that he will survive this mission because he saw a "light green aura" when looking in the mirror. Given all of this, it would appear that the series could've just as easily been titled Death Messiah, with Camellion the fleshly incarnation of the Cosmic Lord of Death. (Or, more likely, he's just fucking nuts.)

Anyway, what's surprising me most is how much I'm enjoying this series. Even more surprising is that Rosenberger's writing isn't that bad at all, despite his bad rep. I guess like any other series author churning out a whopping four novels a year, the man had his good days and his bad days. The Comsic Reality Kill I'd say is mostly "good," only marred by a needless subplot in which a sheriff tries to track down Camellion. Also, Rosenberger doesn't shirk on his writing -- this novel features some seriously small print; if printed at a larger size the book would easily be twice as long or so. Obviously Rosenberger was putting everything he had into this series, which makes it even harder to believe that he did so for 71 volumes!
Posted by Joe Kenney at 6:30 AM

OMG! This is ficticiously delicious! I must find a copy of this book!

Rosenberger was a busy writer - all the novels had this fine print.

Say, Kenny, you are - like I - a fan of strict POVs in writing. Rosenberger jumps from head to head, especially in his infamous kill-scenes. Didn´t this bother you in this case?

For all the nonsense and his sick "can´t wait for WWIII", he could compose excellent action scenes.

Andy, you are right, POV hopping drives me nuts. I try to overlook it though because it runs so rampant in most men's adventure novels. I can only think of maybe two or three writers in the genre who don't do it -- Andrew Sugar is one, at least.

Yeah, the way Rosenberger hops around is pretty annoying, in particular when he gets in the POV of a Russian agent we've just met, long enough for the guy to take a few shots at Camellion before getting killed. However "Cosmic Reality Kill" didn't' have as much POV hopping, really, which is one of the reasons why I mentioned it was actually better written than I'd expected it to be.

Finally...as for WWIII, I just read Super Death Merchant: Apocalypse, which actually does end with the US and USSR declaring nuclear war. Camellion is happy over the development. I thought it would be the last volume of the series, but it isn't -- Death Merchant #71 has a footnote referring back to the events in Apocalypse. I'll have a review up for Apocalypse next week.

You know, Apocalypse is collecting dust on my shelf for years. I only took a peek at the ending :-) It is strange with the footnote in 71 though.

I bought the Dell editions some time ago but just couldn´t get into them. Maybe you can only read him in small doses and my quota was up. But the last ones seemed rather tired. Kind of a last and rather muted hurrah before the genre went out of fashion.

This is one of the more entertaining DMs because it is so rich with the weirdness. Sadly, I only read half of it - now I need to dig it back out and finish the book.

The alien mask and the banana pudding were great touches; I agree that there are times where Rosenberger (maybe intentionally, maybe not...) really does portray the DM in a light where you can only conclude clinical psychosis.