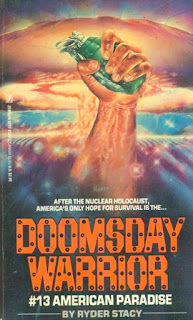 The thirteenth installment of Doomsday Warrior introduces a Foreword, which clues in new readers on when the series takes place (109 years after WWIII) and who the main protagonists are. Actually I think the earliest volumes also featured such a thing, but here Ryder Syvertsen just limits it to the setting and the “Rock Team,” aka the five-man band that comprises Ted “Doomsday Warrior” Rockson’s team of freefighters. And once again hotstuff redhead Rona is given short shrift, not mentioned in the foreword or in the text.

There is as ever no pickup from the previous volume, nor even any indication how long ago it was. That “109 years after” bit would mean it’s 2098, though, given that the first volume had World War III occurring in September 1989. So if Syvertsen is paying attention to his own (perhaps arbitrary) dates, this would mean Death American Style was three years ago, given its stated date of June, 2095. At any rate Syvertsen dispenses with the usual template of Rockson in Century City being briefed on the latest threat, enduring the usual arguing and lobbying of the Century City political wing, and then finally going out into the hostile post-nuke world: American Paradise opens with Rock and his team (Chen, Detroit, McLaughlin, Archer, and Scheransky) already on the way to California.

Contacted by the local Freefighters, bodybuilding surfers called the Surfcombers, Rockson has hurried his team across the blasted US to see if this story of a mysterious new Red weapon is true. Chief Knudson of the Surfcombers claims he saw a big weaponized crystal device on far-off Rapari island (which Rockson believes was once Johnston island), eight thousand miles away. Knudson never saw the thing himself, but natives described it to him – that, and a ghoulish Red they called “Killawee” came along and took the crystal away. Of course this was recurring villain Colonel Killov, something Rockson immediately deduces.

The Surfcombers like to goof off and take it easy, and say stuff like “Life’s a beach!,” and they live in a beachside community attended to by busty blondes in leather string bikinis. Sounds great, doesn’t it, and I wonder if this place was intended to be the “American Paradise” of the title. But Syvertsen passes over them posthaste; instead, more focus will be placed on “New Tokyo,” an island in the Pacific which was rebuilt in the post-nuke 1990s by surviving Japanese (Japan itself having sunk!). The Surfcombers stuff is over and done with so quickly that you wonder why Syvertsen even included it. As it is, only one of them makes an impression on the reader – Murf, who goes along on the voyage to Rapari and shows Rock and team how to sail and live on the sea and whatnot.

Rapari itself is given more focus than the Surfcombers retreat; it’s populated by Pidgin-speaking Polynesians and Rockson instantly falls in love with the diminutive beauty Leilani. Unfortunately for Rockson, Leilani is not only a priestess of the massive crystal, but she’s also a virgin, and must stay that way as part of her holy duties. Archer has no such problems, though; he’s instantly smitten with Hohannah, the obese daughter of the island’s chieftan. This leads to some humor that results in the woman becoming Mrs. Archer, much to Archer’s dismay. As ever Syvertsen clearly seems to like the hulking, idiotic Archer, who for the most part has become Rockson’s sidekick.

Speaking of Rockson, one thing I’ve noted is that his old title “The Ultimate American” isn’t used anymore (and I can’t recall the last time it was); if he’s referred to as anything it’s the “Doomsday Warrior.” Here we learn that Rockson himself isn’t too thrilled with the title. But he’s not given much depth this time around – I mean “depth” so far as in comparison to the other volumes in the series – and instead is more desperate to prevent Killov from using the giant crystal, with no spare time for character development or anything. The crystal, Rockson learns from old military documents on Rapari, is from the late ‘80s ZILCH project, a Star Wars defense sort of thing. Now Killov, commanding his own “rogue army,” has the crystal, and has set it up on New Tokyo, not far off.

Killov meanwhile lords over his underlings, being chaffeured around New Tokyo by his loyal henchman, Nakashima, a post-nuke samurai who loves death as much as Killov does. So much so that Killov actually calls the man “friend,” the first friend he’s ever had – not to mention the only person who has ever liked Killov, other that is than Killov’s mom (and we learn that Killov actually killed his own mother!). This whole part is just super weird, but again it’s the arbitrary weirdness that I so enjoy about Doomsday Warrior. And I haven’t even mentioned the return of Killov’s life-sized dolls, one for each of his enemies (Rockson, Premiere Vassily, etc), and how he melts them with lasers. Or where Nakashima begs Killov to chop his head off, a request that leads to a goofy “emotional” payoff!

But otherwise I found the whole New Tokyo stuff dull, even if it’s up to the usual ridiculous levels of the series – I mean the entire island is built exactly like old Tokyo, even down to the grave of the 47 Ronin. Rockson instantly meets up with the underground resistance, the native Japanese being ruled roughshod by Killov and his sadistic soldiers, but there are precious few of them – wouldja believe, just 47 of them?? And guess what, they’re masterless samurai! Meanwhile Rockson gets in the occasional action scene to keep the plot moving, like when he and Archer arbitrarily assault a Pleasure Pagoda in which captive Japanese women are raped and whipped by the Russians. Rockson and Archer work their way from level to level, killing Russians and freeing young women. There’s also an arbitrary but quick part where Rockson, posing as a “crazed poet,” is captured and put in an insane asylum.

The climactic sequence goes on for a while and starts off with Killov activating the crystal laser, killing 160,000 people in Siberia. It nevertheless maintains the goofy tone of the series; with the flick of a button Killov’s able to break into all radio and TV signals around the globe, so he can state his demands. There’s also a comic book sort of touch where the crystal, in “pain” due to Killov using it to kill (Leilani has a psychic bond with the crystal, you see), activates the crystals in Archer’s head and turns him into an impervious superhuman. Bullets bounce off him as he crushes the KGB soldiers, and in one memorable part he smashes a tank. Despite which, the once-outrageous gore of the series has been toned down, and the epic battle comes off a little bloodless.

It’s also over a little too quickly, Rockson’s team blowing up “Tokyo Tower” right before Killov can fire the crystal beam at Century City, back in Colorado. After this we have a protracted sequence where Leilani, speaking for the crystal, says the thing wants to be destroyed due to the misery it has caused, so Rockson et al have to drag it to the “Mount Fuji” volcano and drop it in. And meanwhile Killov as expected still lives, but Syvertsen gives him a bizarre finale; Killov goes inside the volcano, finds himself in a chamber, and the chamber turns out to be a space ship! Last we see him Killov is in zero-g above Earth, trying to figure out who these people in strange spacesuits are who have “saved” him.

Overall American Paradise is more juvenile than the average volume of Doomsday Warrior, which is really saying something. And not only has the gore been toned down, but so too has the once-outrageous sex; Rockson of course ends up sleeping with Leilani (with the crystal’s destruction, she no longer has to be a virgin priestess), but it happens off-page. In fact the last we see of Rockson he’s pulling her away to a nearby cave! The stuff with Killov in space is promising, though, so I look forward to seeing where it goes – and I hope the next volume sees a return of Century City and Rona.
Posted by Joe Kenney at 6:30 AM