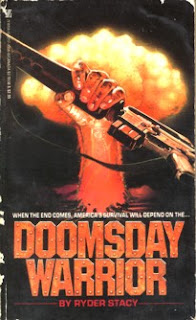 Back in the mid-'80s the men's adventure genre got a new kick with the emergence of what I call "Post-Nuke Pulps," aka action series which were set in the nuclear aftermath of WWIII. Jerry Ahern's Survivalist started the trend, but I could never get into that series. I was familiar with the long-running Doomsday Warrior series -- the painted covers, each with a fist holding a different weapon, really stood out on the bookshelves -- but I was never able to track down volume 1. It was only a few decades later, after reading Justin Marriott's fab overview of the series in Paperback Fanatic #16, that I finally decided to find a copy.

The series takes place a hundred years after the damn Commies have blasted the US with several nukes. The country is now mostly a wasteland, some spots ruined for eternity, others becoming much different from what they once were. Several cities were untouched, pointedly avoided by the Russians, so that the invading forces would have nice places to live. Yes, the Russians have even taken over the country, ruling the populace with an iron fist. The Communist empire is ruled by Premiere Vassily in Moscow; his nephew controls the US from the White House. The true power however is the KGB, here reformatted into basically the Waffen SS: a bunch of sadists in black leather uniforms emblazoned with death's heads, their commander a sociopath named Killov.

I should mention that in an eerie coincidence we are informed that the Russians launched their attack on the US on September 11th. (September 11th, 1989, but still, that's a bit creepy in its own prescient little way, isn't it?)

Americans have become slaves of the empire, churning out threadbare product which is shipped back to Moscow, suffering hardscrabble lives in slums. But from various remote areas of the conquered US an army of "Freefighters" wage a guerrilla war against the Russians. These are free Americans who have evolved in the radiated stretches of the country; in true Marvel Comics fashion, the decades of radioactivity have effected superhuman change into the people who live in these places. The end result is that the best fighters all have the builds of professional wrestlers, beyond which they can run faster, jump higher, and survive more damage than the average human being.

These Freefighters live in a nigh-idyllic world of underground cities in which each person works dutifully for the future freedom of the American people, making their own food and medicine and weaponry. There are several of these conclaves, but the top one is Century City, located in the Rockies. This is a vast, high-tech community burrowed into the mountains in which the free Americans live a sort of "communist" life of their own, really -- more importance is placed on the city rather than the individual, and each citizen works at various chores for the good of the community. At any rate it's all very comic-booky, as we learn that Century City started a hundred years ago, when a bunch of traffic-jammed Americans got trapped underground following the nuclear blasts; here they formed a society, over the decades creating this virtual paradise inside the mountains, complete with indoor waterfalls and meditation rooms and etc.

Century City's military commander is Ted Rockson, aka "Rock," the toughest Freefighter of them all. A towering, muscle-bound presence with differently-colored eyes ("one violet, one aquamarine") -- not to mention a skunklike streak of white through his heavy metal-long black hair -- Rockson grew up on the wastelands before finding Century City. In fact he trekked across the radioactive wastes on his own, after seeing his family killed by a KGB deathsquad. Hence Rockson has become affected by more radioactivity than most, which of course means he is even more powerful than the rest. Rockson is the protagonist of the series and is your basic idealized action series leading man: charismatic, deadly to his enemies, beloved by the ladies. Known as "The Ultimate American," Rockson is a folkloric hero in this post-apocalyptic world.

This first installment mostly lays the groundwork for the series. In fact it starts off with what I'm certain is the outline "Ryder Stacy" used to sell the series. We learn how this post-nuke world came to be and meet all of our characters (and there are many of them), both the Americans and the Commies. During lots of bickering between Killov and General Zhabnov (aka the ruler of America), Rockson and his Freefighters launch several raids on Russian outposts. The Commies devise a mind-controlling device which allows them to locate the hidden American bases, and later on Rockson discovers new, devastating weaponry that has been created by mutated Americans far out in the wastelands, and he and a few handpicked men venture out to get hold of it.

The problem is, Doomsday Warrior #1 is too damn long. At nearly 400 pages of incredibly tiny print, it's so padded as to be monotonous. There are many repetitive sequences and incidental bits that should've been gutted. For example, there is an endless scene where a returning party of Freefighters describe to Rockson the ruined land they just trekked across, pages and pages of dialog...and then, mere pages later, Rockson and his crew trek over the very same terrain, with the same description employed in the narrative!

But even worse is the writing. Simply put, the writing here is often atrocious. I'm always nagging about POV-hopping -- where the narrative jumps between character perspectives with no warning -- and "Ryder Stacy" takes it to new depths here. The most jarring instance I can think of is when we're in the POV of Rockson as he and his Freefighters hide in a valley, preparing to launch a sneak attack on a group of Commie helicopters -- and then, in the very next paragraph, we're suddenly in the POV of one of the crewmembers on a Russian 'copter. I just cannot understand how a writer can POV-hop and not realize what he is doing. It completely takes the reader out of the fictive dreamworld and disrupts the reading experience. I mean, at the very least, drop a damn line or two, give us a little space between POVs so we can understand that you're changing perspectives...I mean, anything.

Where was I? Oh, right, the terrible writing. The dialog too is goofy and hamfisted, but this actually lends the book more of a comic book charm, at least most of the time. (It's hard to be critical with a book that contains lines like: "Look -- it's the Ultimate American!") Cliches however run rampant throughout. Characters who "run like bats out of hell;" tension "so thick you could cut it with a knife." Even secure doors which when unlocked "open as easy as pie." And yet -- this goofy writing actually goes hand-in-hand with the goofy concept of the series itself, so somehow it all works.

What's odd is that there are long stretches of very good writing in Doomsday Warrior #1, in particular the sequences focusing on The Technicians, that aforementioned mutated batch of Americans who have created a host of particle-beam weaponry. The descendants of nuclear silo technicians, these people think only in mathematical terms, which allows Stacy to go into some outer limits of thinking and dialog. It's my understanding that future volumes go into even further reaches, but like any first installment of a series this one plays it a little safe -- any pulp writer knows that you lure readers in with a more traditional first volume before getting whacky in future volumes.

"Ryder Stacy" was the psuedonym of two authors: Jan Stacy and Ryder Syvertsen. Both wrote men's adventure series under their own names, and I'm uncertain if they collaborated fully on each volume of Doomsday Warrior or traded off. I would imagine the former, as some parts of Doomsday Warrior #1 seem to be written by different authors; for example, the writer who penned the Technicians scenes doesn't POV-hop.

At any rate, this first installment was successful enough to launch an incredible 19 volumes. And despite my dithering it is good in spots -- these authors don't shirk on the ultraviolence, with each battle scene featuring lovingly-detailed gore and destruction, lending it a definite tongue-in-cheek vibe. There's also some purple-prosed sex. Justin's Paperback Fanatic article really sold me on this series and I gather from it that it just gets better from here -- and I'm hoping it does, because in my usual OCD nature I've gotten hold of most of the volumes.
Posted by Joe Kenney at 6:30 AM

Commander Killov, Ted "The Rock" Rockson... as trash, this does indeed seem glorious. Interesting to note that the series very nearly outlasted the Soviet Union. Where, one wonders, were the superhuman mutants of Chernobyl.

I'm reminded more than a little of William C. Heine's The Last Canadian (a/k/a The Last American and Death Wind). May I ask, what fate befell Canada in the aftermath of WWIII?

You bring up some good points here -- that's a good question what happened to Canada. Most of these post-nuke books are only concerned with the US, but I do know that Doomsday Warrior eventually broadens its horizons; somehow Rockson ends up in Moscow at some point.

And as for these books outlasting the USSR, another good point. A few of these series ended with the Earth blowing up, just like the climax of "Beneath the Planet of the Apes." I've always thought this was sly author commentary on the genre itself "exploding" after the USSR folded...thereby ruining the premise of the majority of these post-nuke books.

Thanks for mentioning The Last Canadian, I'd never heard of it.

Great review, as always! I loved this series back in high school, but I haven't tried reading any in a while. Probably about time to re-visit it. I remember finding the writing a little clumsy even back then, but there is something lunkheadedly lovable about 'em. I've heard that the audio books they made of the series are a frickin' riot, but I haven't tried those yet. I can't even imagine a Doomsday Warrior book-on-tape... I hope the actor reads "Look - it's the ultimate American!" with the proper gravitas. :)

IIRC, In Richard Harding's The Outrider series there is some mention of the barbarians from Canada.

The Guardians series by Richard Austin aka Victor Milan is another example of those 80s post-nuke books.

...Killiv? You wonder why they didn't just go whole-hog and name the guy "Itor Titzov"...

While you make note of the "coincidence" of the attack being perpetrated on September 11th, I can't help but believe that there's a LOT more to it than that. The writers of this saga as well as the perpetrators of our own WW111 attack in 2001 must have thought much more diligently and religiously than we give them credit for. I don't believe it's any coincidence at all. There is a significant connection to this date that I fear our world has yet to make, or at least make public. There are conspiracy theories abound in our world about all kinds of facets of what the 2001 attack was to mean, but we have yet to understand it. When you become intimately familiar with the entire series, you can't help but to make the short, straight line between fantasy and reality. Stacy Ryder is either a clairvoyant, a prophet, or a terrorist. And I have nothing to suggest the latter.

The Last American novel by William C Heine became a Steven Segal Staight to Video 1998 Dud called "The Patriot".Way different from the plot source. Such a shame and I haven't read it too to figure the product source which I didn't read.The Segal movie was just a fast pace sock em shootem up as usual.