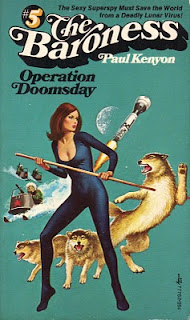 This volume of The Baroness really tried my patience. Let alone that it was a retread of #3: Death Is A Ruby Light, with the Baroness and team trekking through a frozen wasteland, but beyond that it was just aggravating in its overly-padded monotony. Not to mention that the Baroness herself really got on my nerves this time out.

It's unfortunate, because the plot for Operation Doomsday is a good one. In a scenario that would've made Michael Crichton proud, we learn that a supervirus threatens to destroy all life as we know it: during one of NASA's trips to the moon, an astronaut happened to sneeze. Long story short, his germs latched onto moon rocks and basically formed into a radioactive-charged supervirus. NASA discovered this after the last manned visit to the moon, in 1972. The ship inadvertently brought back the virus, which had been growing on the moon's surface over the past years. The virus broke loose and killed over a hundred people in the plant, in incredibly gory fashion -- faces melting, chests caving in, guts exploding. There's a great bit of conspiracy-mongering when an official later admits that this is why manned voyages to the moon were curtailed in 1972.

However a Russian rover-bot has just collected some moon rocks and is headed back to Earth. These moon rocks contain the virus and the US government is in a tizzy. As soon as the Russians open the container, the supervirus will break loose and destroy everything. But the damn Commies won't listen to the President's plea; instead, they figure the US has been cooking up some sort of biological warfare on the moon and is trying to keep the Russians from discovering it. Though they refuse to hand over the unopened moon rock container to the US, the Russians do agree to have the ship land in a desolate patch of land -- namely, a biological warfare plant in the Arctic.

The Baroness is finally called in. Here we have another of those annoying scenes we're it's again drilled into us that no one knows who she really is. To hammer this home we have an overlong sequence of the Baroness wearing a "body mask" which makes her look like a man, complete with special plumbing "down there." She goes to these lengths so she can attend a conference with top US spy officials and NASA scientists, who explain the danger at hand. While the rest of the government is planning how to save a select few hundred people from doomsday, the Baroness and her team are sent out into the Arctic wildlands to get the container from the Russians and destroy it. And they've only got a few days to do it.

Now the boredom sets in. Operation Doomsday is very similar to the average entry of John Eagle Expeditor, only with half the fun. Really though it's identical, with the Baroness surviving the elements with a handful of spy-fy gadgets and an insulated suit of super-thin material. She and her team go undercover with a migrating horde of indigineous Lapps; lots of page-filler ensues, with the Baroness just raring to hunt wolves with the Lapps. She's also sure to set her sights on their top hunter, finding time to get friendly with him in the middle of a blizzard. Again, all of it the same as in Death Is A Ruby Light. Hell, there's even a traitor in their midst, which also happened in that previous installment.

But this novel just bugged me. The endless detail about the Baroness's spy-fy gadgetry, all of it overly explained -- not once but several times over. And in a world of idealized protagonists, the Baroness reigns supreme. No matter the situation, she has either had training in it or can overcome it through blind skill. From hunting wolves with nothing more than a stick and a knife to sneaking into a high-security compound with nothing more than a heated suit, the Baroness is so superheroic as to be annoying. We even learn that in her off-duty time she likes to compete professionaly in Formula 1 racing. But in the absolute dumbest bit of all, when attempting to determine which building houses the moon-rock container, The Baroness flashes into a "Samadhi trance" and instantly knows which building it is. Yes, the nirvana sought by monks over the course of lifetimes can be attained by the Baroness in mere seconds -- even after burrowing through several feet of snow and breaking the neck of a guard.

What makes it funny is how stupid the Baroness comes off, regardless of the idealizing. There are several instances where, despite having such a well-trained team at her disposal, she insists on sneaking off alone for whatever bullshit reason...and gets caught every single time. This has actually happened in all the previous novels but it happens a few times in Operation Doomsday, and it makes the Baroness appear to be a stubborn, glory-hogging fool. Even after the endless sequence where she sneaks into the biological warfare plant (complete with mind-trance detective work), she still gets caught! It almost makes you think that her team would fare better without her. Indeed they're always saving her ass; even her ever-present dogs have to save the Baroness this time out.

Paul Kenyon (now confirmed to be Donald Moffitt, thanks to an enterprising fan over at the Yahoo Baroness group) must've been in one nasty mood when he wrote this novel, as it's by far the meanest volume yet. We've got several scenes of torture, complete with women stripped nude, staked on snow-swept fields, raped (by a hunchbacked dwarf with a "member" as twisted as his body, no less), and then torn apart by wolves. The Baroness herself gets tortured; we don't get all the details but we know a pin has been stabbed into various parts of her anatomy. This is a darkly humorous sequence regardless, with her torturers referring to the KGB torture handbook throughout. There's even a scene in which an entire village is gunned down, complete with descriptions of little kids getting blown apart.

So, a grim entry in the series, but in the end a rather boring one. What's worse is that the climax appears rushed, which is strange given that so many pages have been killed describing how Lapps hunt wolves and etc. Even the main villains this time out -- a psychotic Russian and his attendant, the aforementioned hunchback -- are given short shrift, lost in the jumble of characters and subplots. John Eagle would not be pleased.
Posted by Joe Kenney at 6:29 AM

Personally I don't consider any of the BARONESS adventures boring but you do hint at something that has me in amazement more than ever before: The various styles of writing between one novel and the next. When I assumed that various authors were involved, that was par of the course. But how can one single writer like Moffitt write so very differently for one and the same series in such a short space of time? Some of the books are more sex obsessed than others, some are more grim and violent, some are straight forward adventures, the narrative style differs throughout a number of them. Yet all apparently the same author? I am stunned and part of me still can't accept it.

Holger, thanks for the note. Yeah, this one just bored me. Maybe because it's I expect more from the series. Honestly though I've been under the assumption it was all the work of one author from the beginning -- there are many repetitive phrases throughout each of the books, especially when descriping the Baroness's gadgets or how the Baroness herself appears. Of course this could all be editorial amendations, but the "voice" of the narrative has just always seemed the same to me in each of the books. (And this isn't even factoring how a few of the books are carbon-copies plotwise of one another...volume 2 is identical in many ways to #1, only with the setting changed, and #5 is almost a remake of #3).

The most interesting thing to me in those Donald Moffitt letters posted on the Baroness Yahoo group is that Harold freaking Robbins wanted to buy the rights to the series so he could make a Baroness movie!! But then, at that time Robbins was always announcing he was about to make some movie, and it never happened. But still, it's fun to imagine.

I had a copy of this book years ago (not sure what happened to it). I have fond memories of it, I think mainly because, in my mind's eye, the hotsuit resembled the outfit she wore on the covers.

I liked this one quite a bit. Loved the far out plot and gadgetry. I do agree with you that the Baroness is ridiculously competent. Yes, this is fantasy, but being able to know everything or have just the perfect tool for any job, no matter how farfetched, takes some suspense out of the story. Otherwise, I'm a fan of this book.