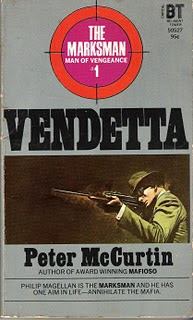 I've slowly been collecting this 23-volume series* over the past year, and figured I should finally get around to reading it. As many have mentioned, this series is pretty much the same as The Sharpshooter -- so similar in fact that the occasional writer of The Sharpshooter has mistakenly referred to the protagonist as "Magellan" rather than "Johnny Rock."

Philip Magellan is the protagonist of The Marksman series, and he and Johnny Rock are both emotionless ciphers who blitz their way through the Mafia, so you can't really blame the authors for confusing them. Peter McCurtin wrote this initial volume, and word is he also wrote the first volume of The Sharpshooter, The Killing Machine. But as usual, this leaves me with questions. McCurtin's name graces the cover of Vendetta, but The Killing Machine was published under the house name "Bruno Rossi." What bothers me, and I'll get more into it later, is how different the styles are in the two novels: I have a hard time believing that the same author wrote both books.

Anyway, Vendetta. This first volume throws you straight into the violent world of Philip Magellan without a safety net. There's no backstory, no origin for our protagonist, no sort of character introspection. What's funny is that the back cover features a rundown of Magellan's past, how he grew up learning about guns and waged war on the mob when they killed his family, but the novel itself doesn't mention any of that. Instead, we pick up with Magellan after he's become a boogey man for the Mafia, so feared that mobsters sit around and worry about the guy. Not only that but the police are hunting him.

The main plot here -- the only plot, actually -- is Magellan cracking down on a San Francisco-based mafioso. Vendetta doesn't even seem like a novel. It's more like an outline for a novel, with barebones narrative and clunky dialog. Even the action scenes are rendered boring due to the clinical way McCurtin writes them. The only time the author comes to life is when he describes guns. Anytime Magellan looks over his weaponry, or the weapons of his opponents, McCurtin wakes up and writes. One gets all sorts of information on certain pistols and shotguns and what kind of ammo they use. In a way, it's sort of like those Gold Eagle books from the '80s, only a lot more rough. Just straight-up gun porn. There is a telling moment, late in the novel, where Magellan "fondles" his weapons as he prepares for the final raid.

Magellan proves himself just as twisted and merciless as Johnny Rock: in the opening pages, as he flies into San Francisco, he realizes one of his fellow passengers is a hitman. Magellan beats the guy senseless and takes him along in his rental car, using the guy to call up his boss. In exchange for cash Magellan promises not to kill the man, but does so anyway. There are many such scenes where Magellan will string up some sap and torture him, then kill him. He takes particular relish in killing the "hippies" who work for the mobsters. Actually McCurtin can't seem to make up his mind if they're hippies or Hell's Angels; likely they're the latter as the guys are a bit too violence-happy to be true hippies.

Another twisted bit is where, for absolutely no reason, Magellan goes to the trouble of sawing off the head of a "hippie" he's killed. Magellan later tosses the severed head into the indoor pool of the hotel he's staying in, a mob-run and hippie-frequented crumbling landmark. It's unexplained why exactly he does this, but at least it's memorable. There's more unintentional comedy in the luck Magellan has throughout: I lost track of the number of scenes where he would sneak into some restaurant or bar, wearing a "hippie disguise," and sit down beside some mobsters...who would, at that very moment, be discussing not only Magellan but their plans to off him.

All told, this was a rushed and muddled effort, not very promising for the series itself. Later volumes were published under the house name "Frank Scarpetta," and thumbing through some of them it appears the series improves (and gets more sleazy!). But again, I have many questions about this novel. I'm not saying The Killing Machine was great literature, but at least it had a good plot and character development, with good dialog and well-crafted action scenes. Vendetta has none of that. Hell, even the tone is completely different.

So is it confirmed that Peter McCurtin actually wrote The Killing Machine? If so, then he must've banged out Vendetta in a rush, or at least after knocking back several bolts of whiskey. Or maybe, as I theorized in my review, The Killing Machine was planned as a standalone novel, and so McCurtin gave it more care, whereas Vendetta was churned out to be exactly what it was: the trashy first volume of a trashy ongoing series. I have my doubts, though. I'm betting someone else wrote The Killing Machine.

*The publishing history of The Marskman is as twisted as its protagonist. The first two volumes were published under Peter McCurtin's name. Volumes #3 - 22 were published under the house name "Frank Scarpetta." The Torture Contract, Murder Machine, Bloody Sunday, and Times Square Connection are all un-numbered volumes, but would be numbered respectively #19, #20, #21, and #22. The 23rd and final volume, The Reckoning, was published under the name Aaron Fletcher, and does not feature a number on the cover nor even "The Marksman." It was also published by Leisure Books rather than Belmont-Tower. Aaron Fletcher was one of the writers who served as "Frank Scarpetta," so perhaps this last volume was his attempt at a closure for the series? The only problem is, The Reckoning is by far the most rare volume of the series; after a year of debate I finally dropped $20 for a copy. At the time of this writing only a handful of online sellers list the book, with prices ranging from $18 to a whopping $160. Give me a few years to work my way through the series and I'll let you know if this final volume is worth the price!

3/9/12 UPDATE: Finally, after a ton of research, I have the truth behind Vendetta. Despite being credited to Peter McCurtin, this novel was actually written by Russell Smith. I learned this via the July-December 1973 edition of the Catalog of Copyright Entries, which states that "Peter McCurtin" was merely the psuedonym used by Smith for this particular volume. (McCurtin was in fact a real person, and indeed was the editor of both the Marksman and the Sharpshooter.)
Posted by Joe Kenney at 8:30 AM

I never see these sorts of books at used bookstores around NYC. Perhaps they've already been scooped up by other readers? Anyway, I keep my eye out for titles you mention. Even though this doesn't sound exactly good, maybe I'll run across one of the later books. Fingers crossed.

I've got quite a few of the Marksman books, too... and I'm thinking they've got a tie to the Asssassin series, which Peter McCurtin also did, and which is a nearly-identical unhinged-guy-dukes-it-out-with-the-Mafia deal. I'm not sure of Magellan's backstory in detail, but The Assassin was a gun dealer who spent his younger years as a trick-shot artist in a carnival... which I'd also read as a backstory for Magellan. The good thing about the Assassin books is there are only three of 'em, so if you get as obsessed with these series as I am, they won't set you back quite as much. :)

This is one of my favorite blogs, keep up the great work!

Just discovered your blog. Love it! I ordered copies of Phoenix #1 and #2 based on your reviews. Thanks!

Ron, thanks for the comment, glad you like the blog. And I hope you enjoy those Phoenix books!

Hey, I just finished reading Bloody Sunday and found your blog in trying to learn a bit of the history behind it (the paperback is so anonymous). Great stuff! I really appreciate you fitting it into the Marksman series. Very helpful.

You can check out my review here:

I'm going to dig around your blog some more now.

I used to own a copy of The Reckoning when I was in High School and I loved it so much I read it at least once a month. It's gritty, raw and violent, the way a true revenge story should be. I hope I can get my hands on it again.

Michael, thanks for the comment. Glad to hear The Reckoning lives up to the promise.

Crazy story, and I should update the review but I'm too lazy at the moment, but Justin Marriott of the Paperback Fanatic recently discovered a "lost" installment of the Marksman series: "The Card Game," by Aaron Fletcher, a Belmont Tower publication from 1980. It turns out to be the penultimate volume of the series, and sadly it's even MORE rare and expensive than The Reckoning...I dropped $20 on my copy, which is a helluva lot more than the half-off price Justin paid when he discovered it in a used bookstore!

I just discovered this blog, and a great blog it is! I can't wait to devote a whole day to it, real soon.

I started collecting these things when they were still on the stands. Along the way I picked up a non-numbered Aaron Fletcher entry titled ICEPICK [formerly ICEPICK IN THE SPINE], copyright 1975 by Tower Publications though the Leisure Books logo appears on the cover. It's been ages since I read it but I thumbed through it just now; the writing seems to be above par. Magellan completists should snag a copy online before the prices go any higher.