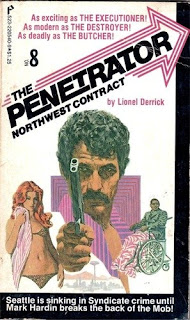 Did Edward James Olmos pose for the cover painting or what?? Anyway, this installment of The Penetrator is a big improvement over the last one. It's another breezy, action and violence-filled offering from Chet Cunningham, who if it isn't clear by now has become my favorite of the two "Lionel Derricks."

It also has become clear that Cunningham and Mark Roberts (aka the other Derrick) were only collaborating to a certain point on the series; I'm betting they were writing their respective volumes at the same time, as each of them only peripherally refer to the other's installments. This almost makes Mark Hardin come off like he suffers from multiple personalities. I can see how two authors switch-hitting on a title could keep it from getting stale (it's my understanding that Don Pendleton's original Executioner series eventually suffered from repetitive storylines), but in a way it hurts the continuity.

Hardin decides to pay a visit to an old 'Nam buddy in Seattle, a guy who has now become a cop. Our hero is so out of touch that he doesn't even know his friend has been dead for six months, killed while on duty. But Hardin sticks around because he suspects foul play; quickly he determines that there is a dirty subset in the Seattle Police Department. A group of cops who extort, murder, and even run whorehouses on the side. Hardin decides it's killing time.

There's not much of a plot here, or even any sort of suspense. But at the same time it's fun in its empty-headed way, because it's just a series of action bits in which Mark Hardin kills a bunch of cops. In his bloody quest he drafts another former 'Nam pal, a black guy named Zip who is now confined to a wheelchair thanks to a VC landmine. Zip runs a leather goods store in Seattle and gathers intel for Hardin, but we don't see much of him in action; rather, the narrative is given over to Hardin beating the shit out of various cops for information, taping their confessions, and then raiding their storehouses. Along the way he leaves his mandatory arrowhead calling cards, dropping dimes to a newspaper reporter to ensure the story gets out.

What I enjoy about Cunningham's entries in the series is the unexpected twists and turns he sometimes takes. In a way his books are like the grindhouse/drive-in exploitative fare that was popular at the time -- grim and gritty sensationalistic stuff that didn't cater to the expected form. For example, Hardin gains another ally here, an Asian prostitute he saves from one of those cop-run whorehouses. The girl has a vivacious personality and is ready to help Hardin take on the crooked cops, and just when the reader expects to see her play a bigger role in the story, Cunningham throws a curveball and destroys your assumptions.

There's the usual in-jokery afoot in Northwest Contract, as has now become de rigueur in the series. For one Hardin uses the cover name Mack Colan, but in a funnier instance -- and another sign of how the times have changed -- he pretends to be a gay interior designer. And I mean gay of the flaming variety. He "swishes" through the lobby of an upper-class apartment and announces himself as "the Pierre," all while wearing a shoulder-length wig.

The action scenes in this one aren't as spectacular as previous volumes, but then Hardin is only fighting a few guys at a time. He again takes a substantial amount of damage, getting shot in the shoulder and going into another of his deliriums. He also manages to pick up a lady, the widow of his old 'Nam buddy, and a somewhat explicit sex scene ensues.

But once again Cunningham delivers a Penetrator more cruel than the average men's adventure hero; the finale of Northwest Contract features our "hero" announcing himself as "judge and jury" and then fatally shooting a naked and unarmed woman -- right "between the breasts," even. And as if that wasn't enough he immediately thereafter blows away another woman. Safe to say this scene wouldn't have made it into the film version.
Posted by Joe Kenney at 6:30 AM