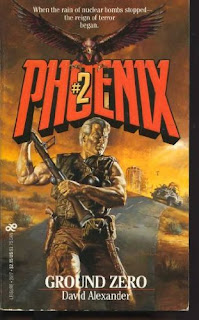 I'm all about delayed gratification, but when it came to the second volume of David Alexander's post-nuke Phoenix saga, I couldn't wait. Dark Messiah, the first installment of this five-volume series, was the most OTT thing I've yet read, so it makes sense that the only thing that could top it would be this second installment. Yes, Ground Zero goes to the same insane lengths as its predecessor, sometimes even further.

The first thing we notice is this second volume is longer than the first. Alexander accordingly gives it a broader story; Dark Messiah, great as it was, went down with the mentality of a violent cartoon in many respects, with a simple storyline of action and vengeance. With Ground Zero the series takes on the nature of a picaresque; you'd figure protagonist Magnus "Phoenix" Trench would be heading straight from San Francisco to NYC to find his wife and son -- to ensure they survived the thermonuclear exchange which ravaged the US in Dark Messiah -- but here we pick up with him a few months after that previous volume, and he's only made his way into Nevada.

Trench might be in a hurry to find his loved ones, but Alexander isn't -- he wants to take his hero on a protracted journey across the blasted, sadistic, post-nuke USA. We learned last time out that the Russians dosed their nukes with biochemicals, which resulted in instant mutants nicknamed "Contams;" even those survivors who haven't contracted the full-blown Contam virus are still affected in some ways, usually with minor scarring or whatever. Only a handful of people are "Immunes," ie people completely unaffected by the biochemicals or the radiation. You guessed it: Trench is an Immune, and as such he's a wanted man.

The battered US government, now under the control of Luther Enoch, the "dark messiah" psychopath who orchestrated the war, has offered bounty on any and all Immunes. The idea is to cut them up and see what it is that makes them Immune, so an antidote can be created. Enoch himself has been infected by the virus; only a robotic suit keeps him from becoming a full-blown Contam, and he now commands his forces from his underground survival bunker (which we're now told is in Virginia; the previous novel implied that it was the more-unexpected West Virginia...but I guess this is incidental in the post-nuke US). Long story short, roving bands of bounty hunters scour the country, seeking out Immunes. Dead or alive.

Having dropped off the 15 year-old prostitute September Song in California, Trench now travels alone, armed as always with a variety of submachine guns and his trusty MINIMI M249. He stops in Trinity, Nevada, for provisions, fuel, and ammo; despite only being six months out from the nuclear war, the city has already become a Mad Max Beyond Thunderdome sort of wasteland, a shantytown of mohawked punks and armored car-riding warriors. Bounty hunters detect Trench's immune status via handy but hidden scanners, and soon enough the whole town's after him, leading to an endless and gory chase sequence.

After killing pretty much everyone, Trench himself nearly becomes a meal for a pack of Contams. He's saved by the appearance of a flamethrower-wielding midget named Big Wally; Trench laughs at the spectacle, much to the midget's chagrin. But then, a self-mocking vibe runs throughout Ground Zero. For here is a novel that isn't afraid to poke fun at itself, or even its protagonist:

"You know where I can score some weapons and ammo?" Phoenix asked Big Wally.

The midget said he did. "But you want a beer first, right? Then you want to get fucked, I bet. Well, pardnuh, I know this woman, she's got such a fine --"

"Can I quote you on that, big guy?" Big Wally asked, shaking his head. "I mean, no shit, people must tell you all the time you're a regular fount of wisdom, right?"

Big Wally takes Trench into Vegas, which operates much the same, even in the post-apocalypse: people come to the neon-lit streets to wager bets and make "n-bucks," however now they bet on various life-or-death contests. The city is controlled feudal-style by "The Sheik of Las Vegas," a former con who now rules the roost from his penthouse suite in the battered Caesar's Palace. The biggest event the Sheik runs is the Murder Marathon, patterned after the chariot races of Imperial Rome, only with armed and armored muscle cars replacing the chariots. This race goes on between Vegas and the outlying cities, a veritable joust that determines which city reigns supreme. Losing his best racer in a barfight, the Sheik catches wind that the already-legendary Phoenix is in town, and determines to draft him as his new racer in the Murder Marathon.

Meanwhile, John Tallon, the sadist in command of Luther Enoch's mercenary army, has assembled a special team of mercs to hunt down Trench. The best of the best, these men have been put through instense trials over the past months, to ensure their ferocity; Tallon was bested by Trench in the closing pages of the previous novel, and is now fanatical to get revenge. Soon enough he gets wind that Trench is in Vegas, and has been there for a while -- having set the man up, the Sheik of Vegas has succeeded in making Trench his new Murder Marathon racer. Tallon works with the Sheik to get Trench once the race has been run.

The Murder Marathon sequence goes down like an '80s take on the climactic scene from Ben-Hur, with cheering crowds and competitors dying in spectacles of gore. Trench of course emerges victorious, only to discover that Tallon's forces are coming for him; after a chase through the desert, Trench crashes and blacks out, figuring this is the end. What follows is a bizarre sequence which has nothing to do with the rest of the novel: Trench awakens in an underground "paradise" of New Age-spouting hippies, living in an abandoned nuclear silo beneath the Nevada desert. And to add to the cliche; Trench finds himself suffering from amnesia.

The whole sequence comes off like the opening half of Logan's Run meets Beneath the Planet of the Apes. The hippies are led by a gorgeous lady named Elektra-Yang who of course instantly makes Trench her own; lots of sex scenes ensue. Meanwhile we discover that Contams lurk in the hidden bowls of the silo...there is lots of talk about "Blast-Off and Re-Entry," in which pregnant hippies will return to the surface world to preach their lesson of peace to the nuked masses. It all culminates in one of the most tasteless, sick sequences I've ever read, made all the more sick in that it's so incidental to the novel itself. It's as if Alexander was just trying to out-gross himself, and he succeeded; this is some gut-churning stuff for sure.

With the deus ex machina reappearance of Big Wally, Trench -- who has now regained his memory -- is able to escape back up to the surface world. Only to find himself waltzing right into the hornet's nest, as Tallon and his men have lain here in wait, realizing the only place Trench could've escaped to was that nuclear silo. Ground Zero ends with another of those huge action sequences, with Trench and Big Wally taking on Tallon's elite mercenary squad in the abandoned streets of a nearby ghost town (this series is all about cliche piled atop cliche, but somehow it works!).

Everything I loved in Dark Messiah is here: the gun-porn, the ultra-gore, the purple-prosed sex, the dark comedy. The action is spectacular and violent, even though it's really all simple: some guy usually just shoots at Trench, who "somersaults" out of the way and then fires back. But in Alexander's hands it becomes a sort of hyperkinetic poetry:

Crimson spouted from the shattered base of the skull as a longburst of 185-grain HV steel-jacketed wadcutters screaming from a Steyr MPi69 SMG outfitted with a SIONICS silencer struck the target's skull, buzzsawing it into a thousand jagged fragments.

The headless corpse pitched crazily forward. Its weapon, an UZI .45 ACP Micro, clattered from lifeless fingers. Brain-matter cocktail slopped from the open chalice of the skull, spattering the dirty boots. The corpse lurched onto its knees, then keeled over on its side. Firing nerve ends jerked the legs and arms of the torso, giving it the appearance of some gigantic earthworm as it crawled forward leaving a trail of bloody slime.

I mean, the whole thing reads like it comes from the pen of a sex and violence-obsessed teenager with no conscience. Take for example this bit from a later scene, where Trench sits in a stadium full of people in Vegas and watches two women, Mad Maxine and Piltdown Annie, fight one another to the death:

Maxine's urogenital system geysered from the spectacular exit wound in her upper back as the three-round burst of .45 ACP slugs ripped from the muzzle of the steel phallus jutting obscenely from Piltdown's belt.

I should mention that all of this occurs after Piltdown has strapped on said .45-firing "phallus" and first inserted it into various of Maxine's orifices before finally jamming it into her "rectum," awaiting the audience's decision on whether she should fire or not. As stated, she does. But what makes this entire pages-long sequence so funny -- and serves as more proof as to the self-mocking vibe of the series -- is that it ends with this deadpan punchline:

Yes, it's only after we have read endlessly graphic material, about urogenital systems geysering from spectacular exit wounds and heads shattering like cantaloupes as they blow into a thousand fragments, that we are informed our hero is "sickened" by the events.

David Alexander plays this game throughout Ground Zero and it's a joy to behold. For a long time I've searched for a men's adventure series that could equal the over-the-top vibe of TNT -- and let me tell you, Phoenix doesn't just equal it, it surpasses it. And we're only two volumes in!
Posted by Joe Kenney at 6:30 AM

Hmmm. What to name my new Death Metal group; Brain-Matter Cocktail, or Chalice of the Skull?

How about Urogenital Geyser?