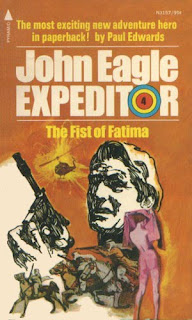 To cue the old cliche, "this time it's personal" for John Eagle, aka the Expeditor. In the previous three novels Eagle was sent on missions that had little to do with him personally, but this time out he himself instigates the job. A cadre of Islamic terrorists murder a pair of US ambassadors in Libya, and one of them turns out to be Eagle's college pal. After the President speaks at the funeral for these men, there follows a neat scene where Eagle himself corners the President and "requests" that he call Mr. Merlin, aka Eagle's boss, and "suggest" an assignment of retribution for the Expeditor.

Another thing different this time out is that Eagle is present from the opening; in the previous books we had to wade through half the novel before our protagonist even became involved in the story. This is good in that it gets the ball rolling, but what's unfortunate is that, as usual, this volume of the Expeditor is so incredibly padded. It's really just a bunch of page-filling until the inevitable finale, in which John Eagle once again dons his bullet-proof chameleon suit and stages a one-man raid on the enemy compound.

Around this time the men's adventure magazine market was drying up, with the majority of the magazines either folding or becoming nudie magazines in the vein of Playboy. But the spirit of the "sweat mags" lived on in the pages of John Eagle Expeditor. For here the "macho mystique" reigned supreme: this series is about nothing so much as man conquering...everything. The white man in particular. Eagle arrives in the Libyan desert and insinuates himself into a party of Touregs, desert warriors who themselves have a score to settle with the Islamic terrorists who murdered Eagle's friend.

And to become one of the Touregs Eagle proves his manhood in a variety of men's adventure magazine-type ways. He kills a few terrorists. He makes friends with the elderly leader of the Touregs, drinking tea with him and going to the trouble of sleeping with the man's daughters -- both women at the same time. (And this sex scene, as is mandatory for the series, is again presented as a struggle itself, between man and woman, with man victorious.) Next Eagle tames a wild camel, which in true Alexander the Great fashion has been too wild for any of the Touregs to tame. He practices and masters the Toureg fashion of firing a long rifle from the back of his camel. Finally he challenges a prick Toureg who has been antagonizing him to a bout of mortal combat, and Eagle of course slices the prick up.

So really, this entire middle half comes off like a sequence of men's adventure articles. Each section could easily be separated from the novel and plunked into one of those magazines, with an appropriately-lurid title: How I slept with a pair of desert wenches -- at the same time! But as expected it all fizzles out, having at length nothing to do with the finale; despite all of the work of ingratiating himself with the Touregs, preparing to fight with their growing army against the enemy stronghold, it ends up with Eagle the lone survivor, again trusting to his own devices to serve up some bloody payback.

The enemy boss is unimaginatively named "Leader," a hulking African who calls himself "The Black Death." He has assembled his terrorists under "The Fist of Fatima," which takes the familar Hand of Fatima and turns it into a symbol of war. From his mountain stronghold he sends out his men on missions of terror and murder. Armed with his high-tech bow, vials of explosives, and dart gun, Eagle infiltrates the place and kills everyone in a drawn-out and entertaining finale.

I've long suspected that Sylvester Stallone was/is a fan of men's adventure novels -- it was Stallone's film The Specialist that "outed" John Shirley as John Cutter, after all -- and The Fist of Fatima adds more proof. For one, the entire novel is quite similar to Stallone's unsung masterpiece of '80s action, Rambo III. Sure, in the film Rambo was saving an old friend, not avenging him, but otherwise it's all pretty much the same, with the protagonist becoming friends with desert warriors who do battle against a larger and better-equiped army. In fact, I'm betting John Eagle Expeditor itself played some part in Stallone's version of Rambo.

I know, David Morrell created the character, but Morrell's version of Rambo was a scrawny, bearded kid who had been trained to be a killing machine without a soul. As screenwriter for all of the films, it was Sylvester Stallone who created the Rambo character we all know, giving him more depth and humanity. Also, it was Stallone who, in First Blood Part 2, introduced the concept that Rambo was partly of American Indian heritage; further that he was fond of using fancy bows and arrows...explosive-tipped arrows at that!

And finally...there's even a scene in The Fist of Fatima where Eagle, who has just blown a pair of helicopters out of the sky (with those explosive-tipped arrows, just like Rambo), gets on the horn and growls a threat to the enemy leader, back in his base. All Eagle needed to say was "I'm your worst nightmare," and the picture would've been complete.

Anyway, maybe it's all coincidence. And by the way I'm not claiming all of this just so I can whine that Stallone "ripped off" John Eagle Expeditor...hell, if it turned out to be true, I'd just think Stallone was all the cooler.

This was Robert Lory's second appearance as "Paul Edwards," and again he does a good job of keeping the story moving, despite the inordinate amount of padding. There isn't as much lurid stuff this time out (other than the scene involving Eagle and the perpetually-horny Toureg sisters, who despite it all become increasingly annoying as the novel progresses), but the action scenes are tautly done.

All told, The First of Fatima is more of the same for John Eagle Expeditor, but for whatever reason this is still one of my favorite series.
Posted by Joe Kenney at 6:30 AM