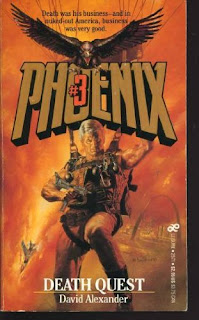 The post-nuke carnage continues in volume #3 of the Phoenix saga, the most action-packed installment yet. Which is really saying something, because they've all been action-packed. And in fact Death Quest, while occasionally as insane, graphic, and lurid as its predecessors, kind of wears thin after a while, being nothing more than one protracted action sequence after another.

When last we saw our hero Magnus "Phoenix" Trench in Ground Zero, he'd been captured by the mercenary forces of "Dark Messiah" Luther Enoch, aka the guy who caused the end of the world. Enoch's head honcho John Tallon trapped our hero, and that novel ended with Trench being escorted away -- Trench is an "Alpha Immune," possibly the only one in existence; he is completely immune to the radiation and biochemical-induced contaminations which plague the rest of mankind. Luther Enoch himself is one step away from becoming a full-on "Contam," kept human only by a biosurvival suit. Enoch wants Trench dead or alive, so he can create vaccines from his immune blood.

But little need to worry about our hero. When we meet Trench in Death Quest he's already got his hands wrapped around the throat of an orderly who is about to cut him up. Killing the man, Trench stumbles about in a "purple haze" of drugs that have been put into his system over the past few weeks of captivity.

Trench then makes his escape from this enemy base: he kills a few merc soldiers, takes the uniform of one of them, sneaks onto a departing cargo plane filled with mercs and weapons, gets discovered halfway through the flight, kills a ton of mercs in a firefight which results in a hole blasted into the plane, jumps out with an M-60, some Uzis, and no parachute, gets in an airborne fight with the one man who escaped the downed plane in a parachute, kills the guy and takes his 'chute, lands in the middle of a pockmarked expanse of Middle America, and is instantly attacked by a group of chopper-riding thugs whom he blasts apart with the M-60. It all goes on for about 40 pages, and it's the best running battle yet in the series, all of it of the caliber one would encounter in a ramped-up '80s action movie. The only problem is, nothing else in Death Quest can match it.

Finding himself in St Louis, Missouri, Trench wastes a few more motorcycle-riding punks before meeting up with an underground group of resistance fighters. Led by Mason Bragdon, a one-time politican whose bid for the presidency was crushed by Luther Enoch years before WWIII, these people are trying to free a technician named Reinhart from a government concentration camp which operates beneath St. Louis's fallen Gateway Arch. Enoch's new government is planning to kill off what remains of the rabble of the American populace, destroying the scum and freaks who live in the "Urban Containment Zones." Bombs, designed by Reinhart, will nuke all of the living organisms from these areas but leave the real estate intact. The operation is codenamed "Cocked Pistol."

Reinhart it develops became sickened with the idea and turned against Enoch. Now he's in this camp, subject to constant torture. The camp honcho is a sadist named Mekkannik, who is identical to Trench's archnemesis John Tallon from the previous two books. (Tallon for whatever reason sits this volume of the series out.) In exchange for his help in freeing Reinhart, Mason Bragdon promises to get Trench to NYC as quickly as possible. Bragdon claims to know underground channels which will make the trip easy for our hero; Trench, remember, is still red-hot to get to NYC to determine if his wife and son are still alive.

What follows is battle scene after battle scene, as Trench leads Bragdon's men on various assaults against Mekkannik and his forces. Death Quest is more of your "typical" post-nuke pulp, with more of a focus on action than the lurid insanity we got in the previous books. To be sure, Trench still kills a ton of people -- in fact he kills more people here than in any of the previous books -- but they're dashed off kills (for Alexander at least), with little of the "he shit his pants and died" schadenfreude of the first two novels.

But then, when Alexander does go to those previous lengths, he does so with relish:

The kill was beautiful in its perfect symmetry. The exploding hollownosed bullets struck in a tight cluster pattern which knocked the SCORF cowboy off his feet with his arms and legs spread and a gaping, bloody hole where his heart, lungs and pancreas used to be.

The corpse landed on the electrified perimeter fence surrounding the Cocked Pistol secure cordon. What had been a vicious killer named Bullock jerked spastically as the high-voltage current cooked the blood in its veins and jolted every muscle into convulsive fibrillations.

The eyes popped out of the sockets, followed by spouts of red vein juice from the flailing, gesticulating thing's ears. The bowels emptied, spurting from the snuffed merc's rectum. Then the body sagged to the ground and lay there smoking.

All of that, three paragraphs worth, for a character we only met one page before. A sick delight of the previous books was the occasional appearance of a Contam, ie mutants very much in the C.H.U.D. mold. Even these things don't appear much in Death Quest, save for one brief but grisly scene where Trench and his team must navigate through an abandoned subway station.

One new thing Alexander adds to the series is a sense of nihilism. Sure, the previous books were nihilistic -- this is a post-nuke pulp, after all -- but here the cynicism and weariness is much more apparent. The entire book is action sequence after action sequence; the only break we get is the occasional bit where Trench will mull over man's inhummanity and sickness. There is an air of futility to the whole novel. However during one of these mulling bits we get a priceless moment where Trench, holding his gun and fantasizing over the vengeance he will get, takes gun-porn to its logical conclusion:

Yes, Phoenix ached to spurt hot, cleansing fire from the muzzle of righteous vengeance held erect and potent at his thigh.

He's talking about his MINIMI M249, of course! It's things like this that place Phoenix above and beyond others of its ilk, the obvious fact that Alexander is having just as much fun writing it as we are having reading it. And again this time out we're of course still treated to tons of gun fetishizing, goofy puns, and rock references -- beyond the "purple haze" bit there's also a Grace Jones-type Amazon who fights Trench to the death while she sings ? and the Mysterians's "96 Tears."

So even though Death Quest lacks a certain something that its predecessors had, it still opens with one hell of a protracted action sequence, and it still has that same gleeful sadism about it, just to a lesser extent.
Posted by Joe Kenney at 6:30 AM

I read and enjoyed book one based on your review. I loved it! Truly over the top stuff. I also purchased #2 but haven't started it yet. I really enjoy your blog. Keep up the good work!