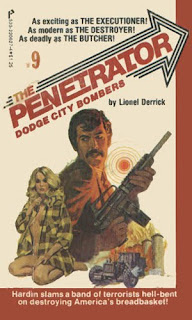 The Penetrator series continues to wear thin in another fair-to-middling Mark Roberts installment. Last time we got to read about Mark "Penetrator" Hardin wasting cops; this time he wastes a slew of young hippie terrorists who are destroying the crops of America's midwest. It's hard not to see Dodge City Bombers as the vengeance of the older set against the long-haired rabble of the youth movement.

But then, the hippie terrorists presented in the novel are pretty cruel. Apparently they're spread across the US, but Hardin focuses on the cell operating around Kansas. The terrorists are killing animals, crops, and even the farmers who work the land, and Hardin is called onto the scene by a farming acquaintance of Professor Haskins. The novel opens with an interesting scene in which Hardin, deep in trance, relives lost moments from his childhood. Unfortunately this doesn't play out anywhere in the novel; I was starting to hope we'd get a little character development for our protagonist here, but it didn't happen.

Hardin packs up his hardware and ventures into Dodge City, where posthaste he's wasting punks left and right. Once again his opponents prove little match for the Penetrator. The series is becoming quite one-sided at this point, with Hardin more of a superhuman than the damaged being we met in the first volume. And again coincedence reigns supreme, as Hardin discovers his enemy immediately upon arrival in Dodge City -- indeed, right as the punk bastards are in the process of killing an innocent real estate agent!

A sadistic tone arises halfway through Dodge City Bombers: during one of their farm-raids the terrorists murder a young farmer. Hardin becomes familiar with the widow and kids, vowing to gain vengeance for the murdered man. But meanwhile the terrorists are following him, and once he's left they go in and torture the kids! There follows an uncomfortable scene in which one of the boys gets a finger cut off. What makes it all the more uncomfortable is that Hardin shows up a bit later and takes the children to a safehouse -- all while he and the widow laugh and flirt with one another, as if the lady's child hasn't just been tortured!

The same uneven tone runs through the entire novel. As expected a romance develops between Hardin and the lady...the lady whose husband hasn't been dead a week yet. The only thing that really salvages the novel is a goofy subplot in which Hardin discovers that the local FBI are after him; there's a funny bit where Hardin, in disguise, attends a meeting in which they give a rundown of "the Penetrator's" appearance (which isn't correct) and warn everyone how dangerous he is -- in a plot that doesn't pan out, the FBI is accusing Hardin himself of the crop-destruction.

There are many spectacular scenes of violence and destruction, which is another plus. Roberts makes the terrorists despicable, even the female of the bunch, a lady who gets off on torture and death. There's also a bit more of a focus on gore this time out, with lots of detail on wounds and grisly deaths. Hardin again gets hurt somewhat badly, which is a consistent happening in these novels. However it only serves to increase his bloody wrath.

Another consistent with Roberts's novels is the in-jokery; in Dodge City Bombers the name of the terrorist leader is Mack Colan. A more obscure in-joke occurs early on, when Hardin is researching the crop-destruction issue with Professor Haskins and David Red Eagle; Haskins mentions that he's gotten information from "a guy named Crawford down in Texas." I'm betting this is a sly reference to William Crawford, a Pinnacle house writer who lived in Texas; Crawford wrote the Stryker series and was also the infamous "Jim Peterson" who wrote the 16th volume of the Executioner series, Sicilian Slaughter.
Posted by Joe Kenney at 6:30 AM

This is the first time I've seen Jim Peterson identified. Interesting. I'm curious to hear where you picked this info up. I haven't yet read SICILIAN SLAUGHTER, but I bet the story of its creation is a fascinating one.

I first read about the Peterson/Crawford situation in Brad Mengel's "Serial Vigilantes." He just mentions it as a fact, that Crawford served as Peterson, but I wanted more evidence. I found this, the catalog of copyrigh entries for July-December 1973 which in fact confirms that Jim Peterson was a psuedonym of William Crawford:

Wow, that's pretty cool. I have the Mengels book, so I either skipped over that fact or somehow forgot it. I wonder if Crawford is alive and would tell his story.