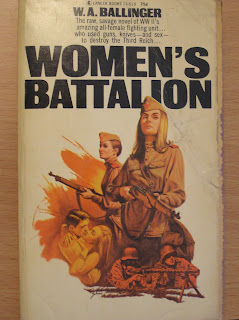 I found this one a few years ago at an estate sale; it cost me about thirty cents. The copy was beaten to hell but it was a solid investment. I've always been interested in pulpy WWII tales, even though I haven't read many of them. Maybe it's due to the various men's adventure magazines that would accumulate in my dad's barbershop when I was a kid; I would always gape at the lurid covers and wanted to read them, but one day my aunt threw them away, saying they'd "rot my brain." The irony is, those tossed magazines would no doubt bring in some serious cash today, as the old "sweat mags" are quite rare and valuable.

I'm unfamiliar with WA Ballinger but I'm certain he's British; his prose has that distinct "English" bent to it, and he's fond of putting a "u" in words where we Americans know they don't belong. His writing is crisp and clinical in a way; Women's Battalion, while occasionaly pulpy and lurid, is more of a "regular" novel, and not the men's adventure/sweat mag-type of exploitation I was hoping for. In fact, it's downright tepid at times, given over to lengthy background details about its large cast of Russian heroines.

And there's a bunch of them. Perhaps the biggest problem with the novel is that Ballinger can't decide who his protagonist is. Is it Major Kroup, the embittered, monstrous woman who forms the "women's battalion" officially as a last-ditch effort to impede the advance of the Nazis onto Russian soil, but really because she wants to kill men? Is it Katrina, the writer who is committed to the ideals of the Soviet Union? Or is it General Budin, a male character, an old battle-hardened sort who spends the entire novel in discussion with one of his assistants, theorizing over military strategy?

Finally Ballinger settles on Vyora, an attractive young member of the battalion who grew up in Germany. This is what gives Women's Battalion such a lopsided structure; after hopscotching with the various characters, Ballinger mentions Vyora casually during a narrative section from Katrina's point of view, and then spends around 100 pages on Vyora's background. But I digress, because Vyora is the most likeable character here -- but what is unfortunate is that we learn, from the first pages, that she and many of the other members of the women's battalion have been killed in a skirmish with the Nazis. The entire novel is a flashback.

In Germany Vyora was still a Communist, sticking close to a handsome German youth named Rudi who was also a Commie. Together they would poke fun at the rising Hitler movement. But then Rudi is called into service...after being hoodwinked into returning to Russia as part of the Soviet regime, Vyora finds herself the new favorite of the tanklike Major Kroup, who harbors sapphic tendencies. Kroup builds up her female battalion and ushers them into their first strike, where several of them are promptly captured by the invading Waffen SS.

Here the novel appropriates the lurid charm of the old sweat mags; the SS man in charge lines the women up and brings in a hulking brute named Henschke, who on command rapes the highest-ranked captured woman. There's even more sordid stuff afoot as Ballinger intimates that the other women are both repelled and aroused by the action...just waiting for the moment when the Nazis will come after them. But guess what, the SS man in charge is Rudi himself!

Vyora's brought to Rudi in his chambers, where Rudi orders Henschke to rape Vyora. But he can't go through with it and finally reveals to Vyora that he knows who she is and can't go on with the sham. Rudi has of course gone Pure Evil, and to boot has lost his manhood in a shelling; hence he uses Henschke as his surrogate "member." This is an odd scene as Ballinger takes the time to recount the war from the Nazi perspective; Rudi claims that his men are good fighting men and not the "baby killers" of popular myth.

Meanwhile Kroup heads up a rescue party, which leads to another taut scene. This squad is comprised of female convicts, a sort of Commie Gal Dirty Half-Dozen. And the lurid stuff continues as one of the women takes the opportunity to collect a bloody "trophy" from a bound Nazi guard. They also take Henschke prisoner and free the women, who have been used the past weeks in a forced bordello for the Nazis; again, Ballinger intimates that the women enjoyed it. Hmm.

After the women have taken their time torturing Henschke, the book becomes more of a regular sort of war novel, and all the pulpy men's mag sort of stuff is gone. While General Budin sits smoking, discussing strategy, and recapping things we've just read, Kroup organizes a secret raid on the SS. The novel ends with a big battle sequence that, while gory at times, again comes off as rushed.

Even though it's a war novel, the majority of Women's Battalion is instead flashbacks to the lives of the various women and conversations about military strategy. The entire novel is almost a build-up to the massacre of the women, which we know from page one will happen.

So it was good if not great; I'm certain there are more WWII novels out there that are in the sweat mag vein, and I'm determined to find them one of these days.
Posted by Joe Kenney at 6:30 AM

Have you read any Sven Hassel yet?

There is Leslie McManus series Churchill´s Vixens, a pseudonym for James Moffat.

Then there is Klaus Netzen´s The Killers, a truly brutal series about a group of british gangsters operating behind the german lines. Written by the incomparable Laurence James.

Thanks guys for the recommendations. I've heard of Sven Hassel but haven't read any of his books. Leslie McManus's Churchill Vixens is a series that's definitely interested me but I've never bothered to track it down. Of all that man's books, I most want to read "Jackboot Girls," but I've heard from Justin Marriott that it's subpar, plus it goes for a very inflated price. And thanks for the Killers recommendation too, I've never heard of that one!

I've discovered a few other pulpy WWII novels that I have on the way; I'm looking forward to reading them. First up is one I've meant to read for a long time, "The Sea Guerillas," by the incomparable Dean W. Ballenger (of "Ganon" infamy).

Well, that's disappointing to hear. The cover on the copy I have really promised to be lurid.

There's a series on Amazon Kindle about WW2 female agents which lists Klaus Netzen's The Killers (as well as Charles Whiting's equally graphic The Destroyers) among its influences ...